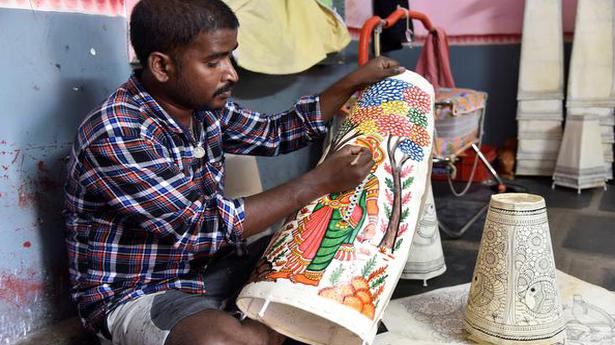 As the clock strikes nine at night, Sindhe Sriramulu prepares for a workshop on tholu bommalata or leather puppetry. He has plenty to share as it is an art form he has inherited from his forefathers. Like the rest of the world, Sindhe has taken to the digital platform to keep his art alive. From his village, Nimmalakunta in Andhra Pradesh (that got a geographical indication (GI) tag in 2008 for leather puppetry), he is busy explaining the intricacies of the traditional craftsmanship to three women thousands of miles away in the United States

Sindhe has adapted to the new normal. He has had to let go of the belief that performing ‘live’ is the only way. In fact, with the help of technology, his audience is spread across the world.

It is still difficult says Sindhe. “We charge around ₹500 per session and there are two or three workshops per week. I have to run a family of eight on this income. It is obviously hard to survive.” His mother taught him all he knows about puppetry and now, along with her, his wife and brother, they are into puppetry. “My mother and wife help make the puppets. They sing and play the harmonium, while my brother and I handle the puppets,” he says.

Along with the craft of making the puppets, Sindhe always gives the participants the back story of tholu bommalata. He speaks of its history and how the puppet shows are drawn from Indian mythology. He also keeps the artform contemporary and relevant by teaching how to use the craft to make wall hangings, coasters, etc. “Some of the students have painted these on handbags, earrings and clutches,” says Sindhe sounding pleased. Creations of Sindhe Sriramulu on display at an exhibition in Mumbai
| Photo Credit: PAUL NORONHA

Not everyone has embraced technology. Of the 80 families that are involved in puppetry at Nimmalakunta, just 20 of them make use of the online space. S Gangaratna, who learnt tholu bommalata when she married into a family of puppeteers 15 years ago is reluctant to do so. While she laments, “We are stuck with stock worth 10 lakhs, and wondering what to do with them,” the 40-year-old refuses to sell online. “Making these pieces is hardwork, we invest our time and labour in it, but when we sell it online we get very less margin of profit which is not sustainable for my family.”