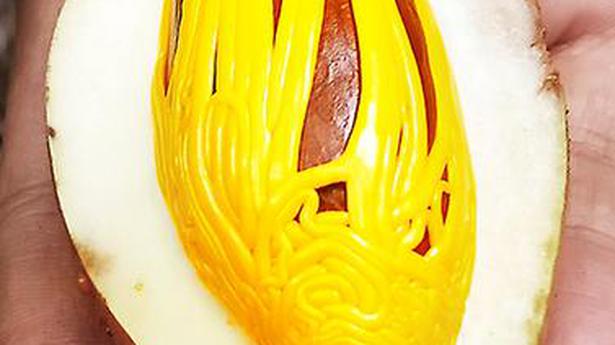 The Western Ghats never cease to surprise. Now, the biodiversity hotspot has thrown up a new species of wild nutmeg. According to researchers, this is the first time in more than a 100 years that a new nutmeg species is being reported from the region.

The March issue of Phytotaxa, an international plant taxonomic journal, has reported the discovery by Govind M.G., Mathew Dan, and Rameshkumar K.B.

With the identification of Myristica trobogarii, the number of endemic plants in the nutmeg family (Myristicaceae) found in India has risen to five.

Three were earlier reported from the Western Ghats and one from the Andaman and Nicobar Islands (Myristica andamanica).

Incidentally, this is the first time in 124 years that a new nutmeg species is being reported from the Western Ghats region.

That said, for the not-so-savvy in nutmeg lore, there’s a catch “spice-wise.” None of the five species is the true nutmeg (jathikka) that is familiar to us as a common spice.

That credit goes to Myristica fragrans, which, though widely cultivated in Kerala, is in fact a foreigner. This nutmeg traces its origins to the Mollucas (Maluku Islands) in Indonesia.

“None of the five wild nutmegs here have the flavour or fragrance of Myristica fragrans. We are all familiar with the reddish mace (aril, or the seed covering) of the nutmeg. Myristica trobogarii has a yellow mace. The fruit is also egg-shaped rather than round and bigger,” Mr. Govind said.

The uses of these wild nutmegs are largely unknown, although they are collected as forest produce. “They do find use as adulterants in the true nutmeg,” Mr. Govind said.

Morphologically, Myristica trobogarii is similar in many aspects to Myristica beddomei, Myristica magnifica and Myristica malabarica – the other three species reported in the Western Ghats. But it has larger leaves, glabrous fruits and more stamens, according to the JNTBGRI team.