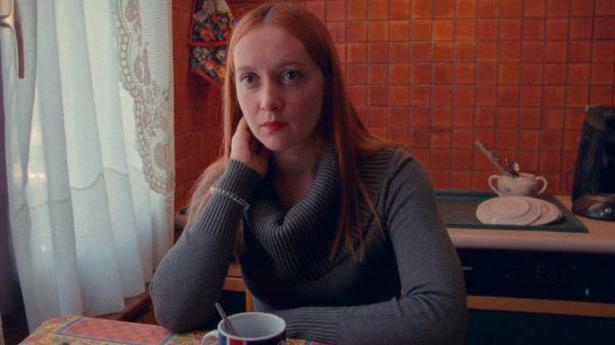 Emerging out of the dense winter fog, wearing a short dress, high heels, a lavender puffer jacket and dragging a big grey trolley bag, a red-hair girl from Eastern Europe (Romanna Lobach) walks in a suburban French neighbourhood. Her entry onto the scene is as mythical as her exit at the end of Ariane Labed’s directorial debut, Olla. The titular character has no past or future, yet she leaves ample trails through the 27-minute short film for us to speculate what her life would have been appearing out of thin air, literally, and after disappearing. Labed presents an enigmatic character whose presence makes for not just an engaging character study but also how men react and eventually project themselves onto her.

Olla meets Pierre (Grégoire Tachnakian) online and moves in with him. We don’t know anything about their courtship, but this appears to be their first meeting, and of course, a giant leap of faith on both ends. There is expected awkwardness and disparate expectations. In the following days, Pierre begins to mould her into a woman he desires, beginning by suggesting that she calls herself Lola, in order to fit in better. In time, the relationship escalates to abuse. Olla, on the other hand, makes an attempt to assimilate, but her mild pursuits at recalibrating her new surrounding, like putting make-up on Pierre’s Alziemers-ridden mother while taking care of her, is met with contempt. Olla communicates in broken, rudimentary and heavily accented French and fine-tunes her linguistic ability. With much restraint, Labed depicts the power play in a new relationship, and the upper hand that the man has, since Pierre appears to be more affluent, older, and of course, from a wealthier part of Europe than her.

Thankfully, the film doesn’t present Olla as a hapless victim of circumstances, nor is Pierre an archetype of a toxic and macho man. Although, he could very well pass off as an incel, and probably is one. Besides her dramatic last move, Olla is shown to be a woman in charge of her body throughout as she prances seductively in her lingerie as Pierre’s immobile mother looks on. In Pierre’s absence, Olla stirs things up, but her body language is noticeably different, dull and timid in his presence. Shot on 16mm film, Olla’s grainy, vintage photograph-like quality lends itself a hyper-real texture, in which the protagonist’s presence, especially her crimson hair and leopard print attire, pops out and occupies a symbolic space in the intimate framing. Her denial of agency in Pierre’s home is compensated by the filmmaker’s acute focus on alleviating her appearance through striking visuals of bathing, dancing or even cleaning and the sounds of her heels in an otherwise silent and still ambience.

Olla in one of those short films that could easily lend itself to a feature-length, and the limitation in the narrative is visible owing to time constraint. There is so much more you would like to know and see about Olla and Pierre, and you suspect the filmmaker has a lot more to say. Yet, in the confines of half-hour, Labed, who has acted in films like Attenberg and The Lobster, provides a compelling screenplay and engaging visuals, dishing out a promising start to her filmmaker career.

Olla will stream on Mubi India from June 1