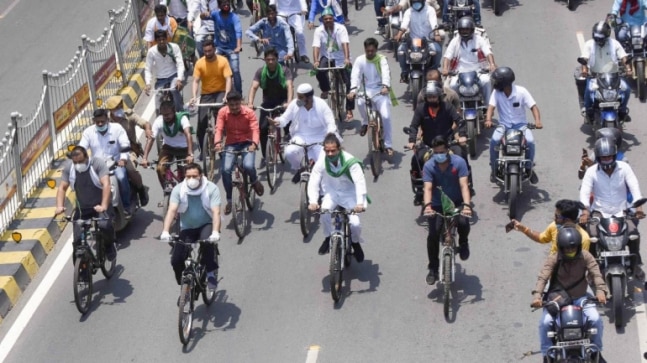 RJD chief and former Bihar CM Lalu Prasad Yadav is serving a five-year prison sentence after he was convicted in a number of cases related to the fodder scam.

Ardent followers of the RJD chief celebrated the party’s foundation day, hoping that RJD will register a landslide victory in the assembly elections under Lalu Prasad Yadav’s leadership. “We are hopeful and have full faith in almighty that our party president will guide RJD in the crucial Bihar elections,” Lalu Prasad Yadav’s self-proclaimed foster son Irfan Ansari said.

Party cadre was seen in high spirits and even cut a cake to mark RJD’s foundation day. Supporters of the RJD firmly believe that their party president will be granted bail since he has served half of the term awarded to him in various cases part of the fodder scam.

Reports said that the RJD chief’s counsel informed Yadav’s supporters that he has now been in prison for more than 3.5 years. Lalu Prasad Yadav was awarded a maximum sentence of 7 years under two sections in connection with the excess withdrawal from Dumka Treasury (Rs 3.13 crores).

He is currently on bail in connection with cases of excess withdrawal from Deoghar Treasury (Rs 37.7 crores) and Chaibasa Treasury (separate from the case in which he has been convicted). At the same time, a trial is yet to conclude over the excess withdrawal of Rs 139 crores from the Doranda Treasury.

RJD now believes that the distribution of tickets, election strategies, and the formation of alliances on its foundation day could make a difference in its performance in the upcoming polls.

Party leaders and Yadav’ sons Tejaswi and Tej Partap also rode bicycles in Patna on Sunday along with RJD workers to protest against the rise in petrol and diesel prices.