One night at the Qutub: Celebrating 25 years of Tarun Tahiliani 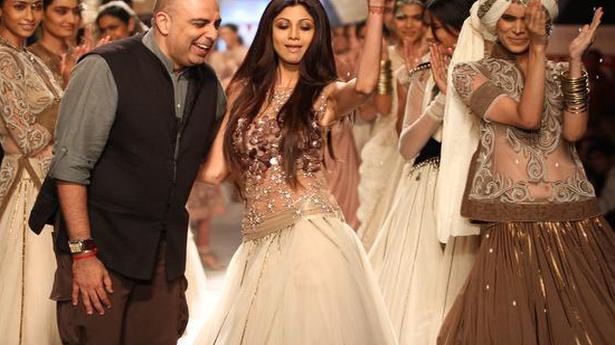 Bring your walking shoes, reads the invitation. For an evening stroll in the Qutub Minar Complex. But with Tarun Tahiliani zipping in and out of rooms and nimbly up the stairs at his Gurgaon atelier, that should have been a requisite for the entire day. TT (as the Delhi-based fashion designer is known in the industry) runs us through the installations — of recent innovations with brocade (New Brocade, he calls it), Jamdani, key pieces from summer wedding collections, his enviable archive room and 25 signature garments reinterpreted for the 25th year of his eponymous brand.

We spot garments and accessories worn by famous actors, royalty and Indian supermodels. He talks about modernising Indian couture by making it lightweight, and encourages closer inspection of a ‘new brocade’ pink lehenga — soft, weightless and well-suited to the drape he mastered decades ago. Stragglers among the fashion scribes and influencers, lingering over tables bearing embellished clutches (from his mother’s collection) and embroidered jewellery, are gently herded on. It is only mid-day, but the rather ambitious itinerary hadn’t accounted for Mahashivratri traffic between us in Gurgaon and the flagship store in Mehrauli. It appears Tarun’s plan to get us to see the different processes, the toiles (mockups), and the embroidery units, will have to wait.

Women who have influenced

Message from the HQ

Designed about 12 years ago, by French architect Stephane Paumier, this expansive studio with exposed brickwork and vaulted skylights is where Tahiliani spends much of his day. With a workforce of about 950. At the entrance, two T-shaped pillars mimic the logo of his brand, while the arches inspired by the Islamic monuments in the capital point to his passion for architecture and the synthesis of different cultures.

Tahiliani, 57, that rare breed of designer who can promise relevance and longevity with his garments, is typically forthright. The Wharton-educated son of an Indian Navy admiral wishes aloud that the fashion industry would work together than against each other. When someone in the group brings up the legacy of his brand, he says, “Legacy is too pretentious a word. We have understood construction and draping.” He talks about a time when specialists who draped (in India) never embroidered, when the tailoring was “so bad and the armholes so tight”. He remembers how everyone wanted to design for “women in lycra petticoats who who ate three lettuces a day”.

That said, his studio is extremely conscious about fit. “Everyone has a need, that’s how [Coco] Chanel found her tweed,” he quips. The TT Bride — he has dressed about 15,000 — wants her lehenga to be light enough to dance in all night. “A lot of girls just buy off the rack. And while we are not principally bridal, there is a push for us to do more — the boho bride, the gypsy bride, the khadi bride…” He admits they like to be a little sexy, a little sheer, often with a tulle veil anchored to the head with a single pin. His most recent celebrity bride, the talented actor Devika Bhise, who wore Tarun Tahiliani to almost all her Indian ceremonies, might be a case in point. It isn’t just his industry that Tahiliani is outspoken about. He has stated his views on the Citizenship Amendment Act, one of the few designers to do so. Supportive of his embroiderers, most of them Muslim — “it is true that a lot of the craft is done by Muslims of all ages as embroidery was part of their tradition” — he recognises individual talent.

This is reiterated by his staff. Masuma Naqvi, 34, who heads his Embroidery Concepts team, says Tahiliani encourages new learning, be it with draping, painting, embroidery or digital prints. Trips to museums and monuments in Agra, Jaipur and, last year, Egypt, are organised for a wider view of cultural motifs and architecture, which is then interpreted on the design floor. It is something she, with 10 years in the industry and a stint with Anju Modi, had not experienced earlier. “They bring something of their heritage, their understanding of art, their hand,” explains Tahiliani, whose inspirations are wide-ranging, be it the Kumbh or, this year, the Qutub Minar.

On the one hand he remains faithful to both shape and drape, but he is also open to contemporary design intervention. Former associates like Amit Aggarwal have gone on to find independent success (Aggarwal’s futuristic design vocabulary with recycled polymers and water-finished metallic chiffons, makes him one of the most interesting Indian designers to track today), and Tarun continues to mentor some of them. The studio has large blow-ups from past photoshoots, mostly of all-time muse, Mehr Jesia. Jesia, who accompanies us later on the Qutub Minar walk, says she finds TT creations as relevant and wearable today as they were 25 years ago. Our visit ends with the big celebration at Tahiliani’s home, featuring a South Indian menu and some of his dearest friends. It is, as his beautiful wife, Sailaja (or Sal), puts it, a typical day in her husband’s life. “He goes to the studio, then the store, makes time for an evening walk in the Qutub Minar complex, and then comes home.”

It is a boring life, jokes Tahiliani. Then adds, “I always love walking in the Qutub Minar. Most of my friends in Delhi have not seen it (lit up at night, a recent government initiative), and I thought most of you would not have seen it either.” He is right about that. It is also the perfect setting to think about divisive politics, our diversity, and a past we are proud to have in our present.

The writer was at TT’s 25 at the invitation of Tarun Tahiliani.