Home WOLRD USA Outcry after Virginia officials order US flag to be removed from Capitol...
WOLRDUSA 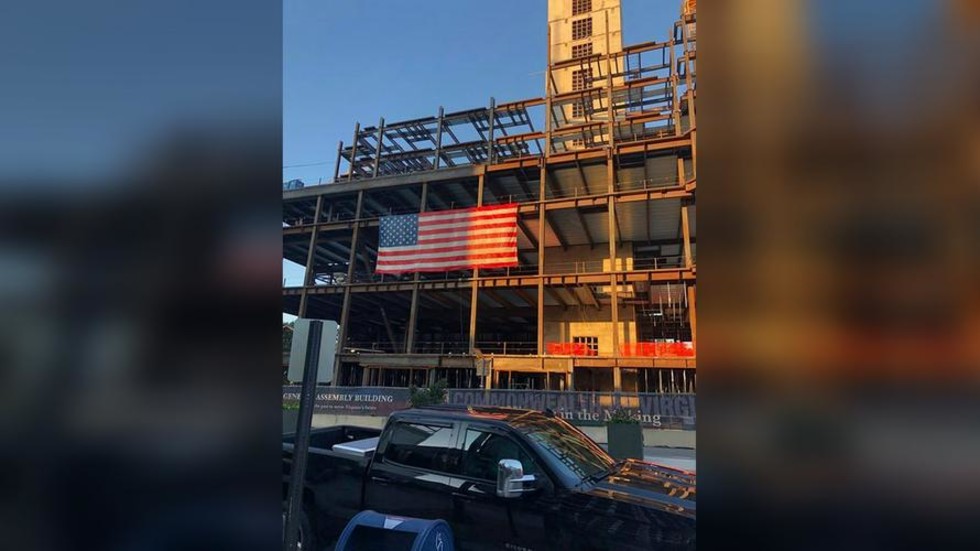 A decision by the Virginia state government to order a giant American banner to be pulled from the would-be seat of the local General Assembly amid fears protesters could tear the flag down, has faced pushback online.

The huge banner, made of tarps, which hung about two stores from the ground, was ordered to be taken down from what is set to become the future seat of the state legislature just as the nation was gearing up to mark July 4th.

State officials argued that the removal is a neccessary precautionary measure, so that Black Lives Matter protesters won’t see red over the US state symbol, which has been repeatedly burned as initially peaceful protests against police brutality have descended into vandalism on multiple occasions.

Also on rt.com
‘It’s a literal insect’: Eyerolls all round as Virginia university pledges to examine wasp mascot over fears it’s ‘exclusive’


“Over the past month we’ve seen buildings and structures around Capitol Square vandalized and flags, dumpsters, a bus and other items set ablaze during demonstrations around the city,” Dena Potter, spokeswoman for the Department of General Services, said Friday.

While the project’s general contractor – Gilbane Building Company – promptly complied with order, earning praise from the state government, the move drew fire from a subcontractor, responsible for installing the flag in the first place.

Eric Winston of American Coating Corp. did not hold back while taking aim at Virginia state officials on social media. In a lengthy Facebook post on Thursday, Winston called on “Mr. Governor, Mr. Mayor, or whoever made the call” to “stop letting the inmates run the asylum,” suggesting that if he had put up a BLM banner instead of the national one, nobody would have taken issue with that.

Since when is this flag, on this weekend, IN THIS COUNTRY, a Target!! Let me guess, if I had a black lives matter flag it would be “ok”!? “F” you & your feelings.

Winston said that he bears no grudge against any kind of protest action, pointing out that this is part of what the flag actually stands for.

I’m all for the freedoms and liberty’s we have in this country. Protest, sure. Take a knee during the national anthem, whatever floats your boat. Marry who you want, absolutely! That’s what this flag represents!

Explaining the state’s move to order the flag off, Potter argued that there were concerns that protesters could have yanked the banner on their own, because it was placed relatively low above the ground. The state, she said, did not order a flag flying from a crane at the same construction site to be removed.

Nevertheless, the order has drawn major backlash online. Former US Representative from Virginia’s 2nd Congressional District Scott Taylor, who is seeking to retake the House seat he lost in 2018 in November, slammed Virginia Governor Virginia Governor Ralph Northam for effectively caving in to protesters.

“Have you lost control of the Capitol?”, he tweeted.

This is the pathetic. Shame on whoever ordered the American flag removed from Va Capitol construction site. https://t.co/KGCG1TsTS3

Others pointed out that by admitting that the national banner would likely be damaged by the demonstrators, Virginia’s first Democratic government in decades acknowledged that the protest itself is no longer peaceful.

It comes shortly after mayor of Richmond Levar Stoney invoked “emergency powers” to order “immediate removal” of all confederate monuments, saying that the failure to do this would pose “a severe, immediate and growing threat to public safety.”