Peafowl sightings have gone up in Kerala and Tamil Nadu 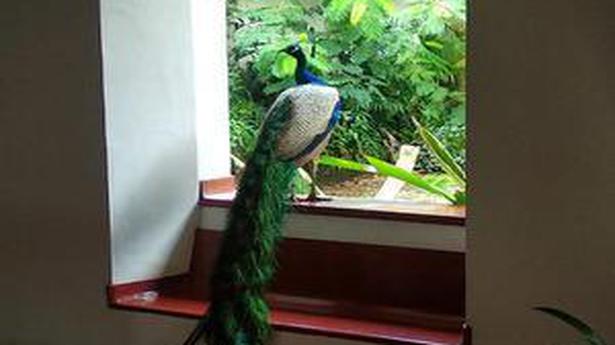 The sighting of a peafowl at Brunton Boatyard, a heritage hotel in Fort Kochi, sent its staff into a frisson of excitement, something they had not felt since the time the COVID -19 pandemic forced guests to depart and left the premises deserted.

As the peafowl strutted around looking curiously at itself in a life-size mirror in the lobby, Annie Mendez, Executive Housekeeper, caught the rare sighting on her phone camera. The photo on social media incurred a flurry of response of similar sightings from different homes and gardens in Fort Kochi.

“We have been seeing these birds quite often in our premises for the past six months,” says the watchman at Bishop’s Palace, a two-acre wooded property and the 500-year-old seat of the Cochin Diocese. Hereabouts Kochi-based wildlife photographer and restaurateur Ramesh Menon managed to get some striking photographs.

“They are seen all around Kochi now,” says birder Vishnupriyan Kartha adding that their increasing presence in Kerala may indicate something deeper and lasting.

At farms in Palakkad

However, for Palakkad-based farmer P Narayanan Unny — who runs Navara Eco Farm that produces the rare medicinal Navara rice, along with organic vegetables —the peafowl are more of a menace. Initially the bird appeared in ones and twos but now arrive in flocks. “They destroy crops to a point that we don’t have plants left even for seeds.”

He first noticed their infrequent appearances in 2006. By 2013, he says, their numbers had increased drastically. “We grow a variety of vegetables, medicinal plants, cash crops and the GI-tagged navara rice. Our farming is organic and hence very safe for the birds. They get everything here and I guess that’s why they flock the farm.” Seven years ago, when his crops were being damaged, he kept a large dog to fend them away. But the peafowl and the dog formed a unique compatibility. He then employed two watchmen to chase the birds away but “it resulted an increase in cost of production and proved unviable,” he explains.

Ten years ago, BC Choudhary, Executive Trustee of the Wildlife Trust of India, conducted a survey on the status of peafowl population in protected areas of India but did not notice any significant growth rate in population. “In recent times,” he says, “there have been complaints of crop damage by farmers in a couple of places in Tamil Nadu. But this Kerala incursion may be recent.”

With the increased spotting of peafowl in Kerala, environmentalists are wondering questions such as these: is Kerala getting drier, thus attracting peafowl that generally live in semi arid deciduous landscapes? Are predatory jackals that control the peafowl population missing? Will snakes in the peafowl’s new habitat be endangered? Will their proliferation affect the natural birding scene of Kerala? Or are these sightings just stray ones?

“Peafowl (Pavo Cristatus) are being sighted not just in Kochi but in most parts of Kerala, especially Palakkad, eastern slopes of Wayanad, Chinnar in Idukki district and Thenamala in Kollam distrcit,” says P.O. Nameer, Professor, Wildlife, Kerala Agriculture University, Thrissur, who conducted a study along with Master Student at KAU, Sanjo Jose, on their increased sightings last year.

According to a 1933 study by famous ornithologist Dr Salim Ali at 19 locations in Kerala, the bird was found absent in the state. The first report of the Peafowl from Kerala was in 1963 from Peechi-Vazhani sanctuary. Field surveys carried out after 75 years from Dr Ali’s first visit revealed their presence in 10 out of 19 survey locations.

Nameer’s study sees a connection between the shifting climate patterns and the growing presence of these birds. “Currently, the potential distribution of Pavo Cristatus is limited to an area of 7221.84 km2 and the remaining 30496.14 km2 area was found unsuitable. According to it, we have predicted their increased population in 2050. Our hypothesis is that that Kerala will be drier in subsequent years perhaps due to climate change,” he says.

Nameer also refutes the charge that peafowl population is increasing because of the dwindling number of jackals. “We do not have the baseline data of the past for the numbers of jackals. This argument is used to counter the increased numbers of wild boars. Jackals feed on small mammals and birds. Peafowl is tool large a prey item for the jackals. Jackals however, could be preying upon the eggs of the peafowls, though. However, taking into the fact that they do spread now across the Kerala, primarily in the human dominated landscape, which also has a greater presence of the stray dogs, which could be a potential predator of the Peafowls. But in spite of that the Peafowl population in the State is on the rise,’ says Nameer.

Meanwhile S Bharathidasan, founder of Coimbatore-based NGO Arulagam that works towards conservation of charismatic (peafowl) and non-charismatic species (crows), says, “We are finding ways to minimise threat to peafowls as well as the loss due to crop damage by the birds.” One of the NGO’s early student-teacher interventions was of placing tape recorders in fields to ward off the birds. “This met with just 10 % success,” says Bharathidasan who is now contemplating a cultural route to address the issue. “As the peacock is associated with Lord Muruga, we plan to appeal to the followers of the deity to buy crops from affected farmers. There are six prominent temples of Lord Muruga in Tamil Nadu. We are trying to link culture to conserve the national bird,” says Bharathidasan. He also points out that over the years, peafowl have become increasingly comfortable in human habitations. “The changing pattern of land use too could be a reason for their displacement. “They feel it is a safe place where they get their food and are not harmed,” he says.

Human-peafowl conflict is rising, says Nameer, as the birds inflict significant damage on paddy crops, vegetables and even orchards in Kerala. The peafowl is a protected species under the Schedule I of the Wildlife Protection Act of 1972 so illegal poaching for meat and feather is not an issue here.

Nameer, Bharathidasan and Choudhary all mention that seeds treated with pesticides are being fed to the birds in different parts of the country.

Choudhary also points out that their touristy value is high and “the birds are treasured for the delight they offer to viewers.” He refers to two NGOs in Ahmedabad and Gandhinagar that collect peafowl eggs, hatch the chicks and release them in parks. He recalls that, while doing a countrywide assessment of peafowl, the birds were thriving in the non-military security camps along the western border and in defence cantonments. “I remember officers talking proudly of the beautiful plumage of the birds and the presence of almost a lakh of peafowls in some cantonments.”

Meanwhile Annie and the staff at Brunton Boatyard await the return of the bird and the excitement it leads to, something missing during these lacklustre days of the pandemic.