Premier League | City honour Liverpool – then hammer them 4-0, Spurs go down 3-1 to Sheffield 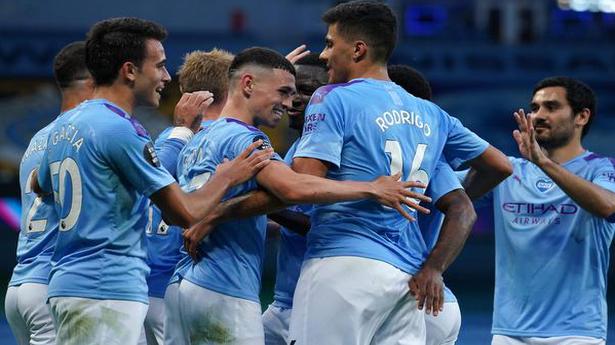 Manchester City generously applauded new champions Liverpool onto the field before their Premier League match on Thursday — and promptly showed no mercy by thrashing them 4-0 at the Etihad stadium.

With the title secured a week ago, there was little at stake for Juergen Klopp’s Liverpool side who showed far from their usual levels of intensity but the loss, just their second of the league campaign, was an emphatic reminder that City will be desperate to regain their crown next season.

After the guard of honour, which included City manager Pep Guardiola, the visitors started brightly and Ederson had to be alert to keep out a fourth-minute effort from Mohamed Salah.

Joe Gomez could not cope with Raheem Sterling’s twisting and turning in the box, pulling him to the ground before Kevin De Bruyne converted the penalty in the 25th minute.

Sterling doubled the lead 10 minutes later when after a swift break, Phil Foden found him inside the box and the ex-Liverpool forward cut inside Gomez and slid the ball home.

The 20-year-old Foden made it 3-0, firing past Alisson after a swift exchange with Kevin De Bruyne.

City were showing an unusual willingness to play long balls and after Rodri launched a pass deep to De Bruyne, the Belgian found Sterling inside the box and he slipped the ball goalwards, with substitute Alex Oxlade-Chamberlain’s outstretched touch only turning it into his own net.

VAR took centre stage once again when Tottenham Hotspur’s Harry Kane had a goal harshly ruled out as they slumped to a 3-1 defeat at Sheffield United to remain nine points adrift in the race for the top four.

The hosts took the lead in the 31st minute as Norwegian Sander Berge finished off a fine flowing move, slotting the ball into the bottom corner for his first goal in English football.

Less than two minutes later, Kane fired past goalkeeper Dean Henderson but his equaliser was ruled out by VAR, with Lucas Moura adjudged to have used his arm to inadvertently nudge the ball in Kane’s direction after being pushed to the ground.

Spurs boss Jose Mourinho was furious with the decision and his mood worsened in the 69th minute when United carved his team open again to set up substitute Lys Mousset for his first goal since Dec. 1.

Tottenham lacked creativity despite bags of possession and Oli McBurnie rubbed salt in their wounds with a third goal six minutes from time, before England striker Kane scored a 90th-minute consolation, tapping in from a Son Heung-min pass.

The result means United leapfrog Spurs to go seventh on 47 points, seven points off the top four, with Mourinho’s inconsistent side dropping to ninth as their hopes of securing Champions League football for next season fade.

When the sides met at the Tottenham Stadium in November, United appeared to have been hard done by with a goal ruled out for a fractional offside decision.

This time it was Spurs who had cause to question the use of the VAR technology with a decision that Sky Sports pundit Jamie Redknapp described as the worst he had ever seen.

Asked for his opinion, Mourinho said: “I can’t say what I think, because I would be in trouble, suspended, and I don’t want to be. Asked if he had spoken to the referee, Chris Kavanagh, he added: “Which one? The referee is hidden in some office. This man on the pitch is not the referee.”

United had struggled after the Premier League restart but agaisnt Tottenham they produced the kind of performance more in keeping with an impressive first season back in the top flight.

Manager Chris Wilder had sympathy for his Spurs counterpart but was more happy to talk about his team.

“They had the majority of the ball, as they will do with the players they’ve got, when we did break it down it was our turn to try and play which I thought we did,” he said.