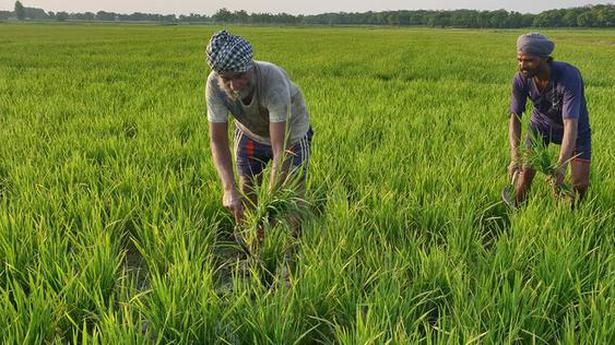 Labour shortage following an exodus of migrant labourers amid the COVID-19 pandemic and subsequent lockdown forced Gurteg Singh to plant paddy using direct seeding of rice (DSR) technique this summer (kharif season), moving away from the traditional ‘transplanting’ practice. One month down the line, he is not just upbeat about about his crop yield, but also relieved about management of crop residue after harvest.

Farmers and agricultural experts say that large scale use of alternative technique — such as the DSR — to plant paddy could be a long-term solution to the issue of stubble burning, a key contributing factor to air pollution, causing breathing problems among people across country’s northern region.

Also read | Yoked together, migrant workers and farmers are back in Punjab’s fields

“I have planted rice with direct seeding method for the first time and so far, the growth looks good. I have already saved on labour cost… Last year, I spent ₹30,000 on labour for sowing nursery and then transplanting it, but this year, I have spent only ₹10,000 on plantation of rice in my 8-acre farm. Also, I had used relatively less water for irrigation. Most importantly, there will be very little stubble left in the field after harvesting and it will be easier to manage the crop residue,” said the 48-year-old Gurteg of Madan Heri village in Punjab’s Shahibzada Ajit Singh Nagar district.

“As my crop will mature around 10-11 days earlier this season — thanks to the direct seeding, I’ll have more time to prepare the field to sow the next winter crop,” he said, adding that with sufficient time between harvesting of paddy and sowing of wheat, there would be no need for farmers to set the stubble on fire.

After harvesting the crop with combine harvester, the farmers usually dispose of the stubble by burning it. . The short ‘window period’, which is bout 20-25 days — between paddy harvesting and sowing the next wheat crop — is one of the key reasons why farmers resort to stubble burning.

This year, however, as the Punjab government has lifted the ban on cut-off date for sowing, and with several farmers opting for direct seeding of rice — they have relatively more time to prepare fieds for the winter crop.

In his joint-family farm of 11 acre, Harjap Singh at village Sotal has sown paddy with direct seeding method. “This year, we went with direct seeding of rice in early June. By end of September the crop should be ready for harvesting. The crop planted with DSR method gets mature 7-10 days early in comparison with traditional ‘transplantation’ method, and hence it can be harvested earlier. Last year, we harvested crop in mid-October. Early maturing of the crop and its advance harvesting would leave us with ample time to prepare field for sowing of wheat. I am sure as the ‘window period’ will increase, there would be far less cases of farmers resorting to burning of stubble this season,” said Mr. Harjap, who is also pursuing an M.Sc in Plant Breeding and Genetic from Punjab Agricultural University.

In Punjab and Haryana, the harvesting of paddy crop is usually done between first week of October till October end. The sowing of wheat crop normally starts from first week of November and continues for over a month and a half. Punjab is likely to see paddy cultivation in around 27 lakh hectares this season, in which farmers would have planted paddy with DSR method in close to 6 lakh hectares so far, said K.S. Pannu, agriculture secretary (Punjab). Last year, the paddy plantation under DSR method was around 60,000 hectares.

In Haryana’s, Raipur Jataan village of Karnal, Ravinder Kajal has sown paddy with direct seeding method in his 5-acre farm. He says, “I had sown paddy in April month itself this year and it would be ready for harvesting in August. After harvesting it, I’ll be cultivating vegetables in field as I have plenty of time before I sow wheat in November. With the DSR method, there would be very less stubble in the field, besides lack of time would no more be an issue now to manage the residue.”

Makhan Singh Bhullar, principal agronomist at the Ludhiana-based Punjab Agricultural University believes DSR technique could to be a long-term answer to the stubble burning issue.

“Apart from being a solution to the ongoing labour shortage, the direct seeding of rice (DSR) technology saves irrigation water in rice cultivation. And importantly, after rice harvesting, the management of rice residue and sowing of next wheat crop is far more easy in comparison to traditional practice. The direct seeding rice crop matures 7-10 days earlier, hence provides wider window for residue management… The soil remains friable after DSR crop harvest as there is no change in soil structure (arrangement of sand, slit and clay), while puddling (transplantation) changes soil structure. And, therefore in a friable soil, it will be easier to manage rice residues and sow the next crop,” says Mr. Bhullar.

“In case of in-situ rice residue management such as zero-till seeding in standing rice stubble, it will be easier for running of Happy seeder drill, which cut rice residues and sow wheat seed simultaneously under zero till conditions. Besides, incorporation of rice residue with tillage implements such as mouldboard plough, rotavator etc., would be more easier in a friable soil, for preparation of seed bed for next crop. In case of ex-situ residue management also, like bailing of rice residue and moving out of field, and after that, running of zero till drill or preparation of seed bed for conventional drill seeding would be easier,” adds Mr. Bhullar.

Previous articleAs Covid-19 persists around the world, death is not the only outcome to fear | Gideon Meyerowitz-Katz
Next articleBlackwood stars as West Indies beat England by four wickets in series opener – SUCH TV