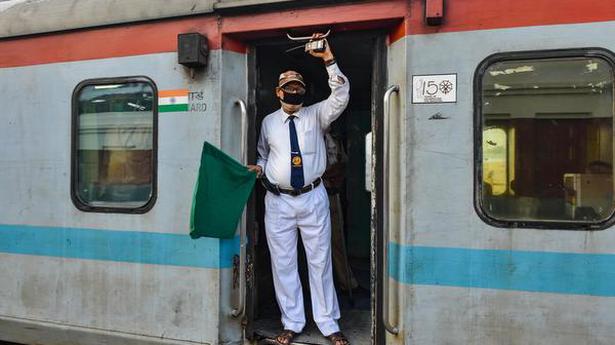 Railway employees’ unions have flayed the Centre for having invited bids from private players to operate 105 trains.

Southern Railway Mazdoor Union charged that the Centre was misusing the COVID-19 lockdown to promote its privatisation policy.

“Since we cannot mobilise people for major protests under the lockdown conditions, the Centre is going ahead with anti-people policies,” according to SRMU Madurai divisional secretary, J.M. Rafi.

“When these two measures would deny train services to the majority of the rural masses, the move to allow private players to run trains will further hit the common man,” he said.

Dakshin Railway Employees’ Union Madurai divisional secretary, R. Sankaranarayanan, said that operation of private trains would lead to manifold increase in passenger fare. Besides, the private players would not entertain concessions for senior citizens, differently abled persons, students and others.

Stating that train journey would become out of reach of the poor and middle class people, Mr. Sankaranaryanan said that the government employment offered by Indian Railway would become private employment. “This will dash the hope of educated youth to find employment in government department,” he said.

He added that three lakh posts lying vacant in Indian Railways would never be filled.

The Railway Department had also asked the railway administration to surrender 50% of the posts that had been lying vacant for the last two years, said SRMU assistant divisional secretary V. Ramkumar.

He alleged that the newly-introduced rail-hostesses in Delhi-Lucknow Tejas Express that was handed over to a private player were not paid their salaries at all.

Mr. Sankaranarayanan said that even now Indian Railways was operating trains at an average speed of 160 kmph. The increase of speed of trains could be extended to other parts of the country too.

But, instead the Government was trying to sell the profit-making sectors of the railway system, which would indirectly further weaken the economy of Indian Railways.

He condemned the attempt by the Centre to give on a platter the Indian Railways that was created with the taxpayers’ money to private players.