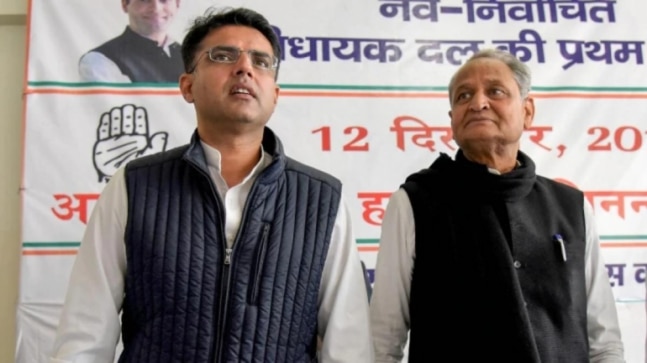 The politics of Rajasthan heated up again on Saturday after Chief Minister Ashok Gehlot launched a volley of allegations at the BJP, accusing it of trying to topple his government, a charge vehemently rubbished by the BJP. In a press conference in Jaipur, Ashok Gehlot said even though the state is battling the coronavirus pandemic, BJP leaders in Rajasthan have “have gone beyond humanity” and are making attempts to topple his government.

In response to these charges, the BJP too came out all guns blazing and launched a counter narrative, saying that Ashok Gehlot is blaming the BJP because he actually is trying to deflect attention from the “internal rivalry” within the Congress.

BJP’s deputy Leader of Opposition Rajendra Rathore said the Gehlot government is unstable and without foundations. “It shivers every three months. It is common knowledge even in villages that this is a divided government. We are not alone in saying this. People of Rajasthan are aware of this. By blaming the BJP, the chief minister wants to deflect people’s attention. Nearly a dozen Congress MLAs from have openly opposed the CM in the Assembly and outside.”

Here are the top 10 developments from Rajasthan:

1) Rajasthan Chief Minister Ashok Gehlot addressed a press conference in Jaipur and said BJP leaders in Rajasthan have “crossed the limit of shamelessness” and were doing politics like “bakra-mandi” (goat-market). “The government in Rajasthan is stable. It will remain stable and will last five years,” Ashok Gehlot said.

2) Ashok Gehlot alleged that Leader of Opposition Gulab Chand Kataria, Deputy Leader of Opposition Rajendra Rathore and BJP state president Satish Poonia were executing the agenda of their party’s central leadership. “Amid the crisis posed by the coronavirus pandemic, BJP leaders have gone beyond humanity and are engaged in toppling the government,” Ashok Gehlot said, citing the example of Madhya Pradesh.

3) Hitting back at Ashok Gehlot, the BJP on Saturday rejected rubbished his charges and instead claimed that there was “infighting” within the Congress. The BJP said instead of using the SOG to investigate crimes, the government is using it to “threaten” MLAs and political parties. “It is the Congress’s own infighting but Ashok Gehlot wants to blame BJP. He is a veteran leader of the Congress and his pain is justified because the Congress has shrunk in the country,” BJP’s state president Satish Poonia said.

4) As the political drama unfolded throughout the day, several ministers and Congress MLAs in Rajasthan met Chief Minister Ashok Gehlot at his residence. Besides ministers like Shanti Dhariwal, Raghu Sharma, Pratap Singh Khachariyawas and Tikaram Jully, some Independent MLAs also met Ashok Gehlot to convey their support to him.

5) Later at night, Ashok Gehlot convened a cabinet meeting at his residence and discussed the emerging political situation in the state.

7) Meanwhile, Rashtriya Loktantrik Party (RLP), a BJP ally, convener Hanuman Beniwal alleged that the Special Operation Group (SOG) of the Rajasthan Police is tapping phones of MPs and MLAs at the behest of the gehlot government. He alleged that Chief Minister Ashok Gehlot made attempts to poach three RLP MLAs during the Rajya Sabha elections last month.

8) In another significant development on Saturday, the anti-corruption bureau has lodged a preliminary inquiry against three Independent MLAs in Rajasthan. This comes a day after the SOG registered a case over alleged attempt to topple the Ashok Gehlot government. The three MLAs — Om Prakash Hudla, Suresh Tak and Khushveer Singh — were allegedly involved in offering money to some other MLAs on behalf of the BJP for toppling the government, according to ACB sources, news agency PTI reported.

9) The Rajasthan Police has also issued notices to Chief Minister Ashok Gehlot and Deputy Chief Minister Sachin Pilot to record their statements in connection with the allegations of BJP’s attempts to topple the Congress government. The police’s SOG also sent a notice to Government Chief Whip Mahesh Joshi to record his statement.

10) The Rajasthan assembly has 200 members of which the Congress has 107, seven more than the halfway mark required to form government. The Congress also has the support of Independent MLAs and legislators of other parties like Rashtriya Lok Dal, CPI (M) and Bhartiya Tribal Party (BTP).

Get real-time alerts and all the news on your phone with the all-new India Today app. Download from
Previous articleCOVID-19 death toll rises to 18 in Puducherry
Next articleCoronavirus Live Updates: Amitabh Bachchan, Son Abhishek Bachchan Test Positive For COVID-19