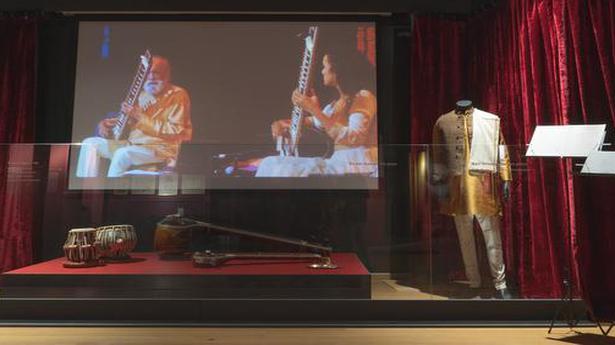 In November 2012, a few weeks before his death, a frail and weak Pandit Ravi Shankar took the stage at Terrace Theatre in Long Beach, California. He played his last concert on a smaller sitar especially created for him by master sitar maker Rikhi Ram’s grandson, Sanjay Sharma. His usual instrument had become “too heavy to handle” his wife Sukanya Shankar had said.

At the Indian Music Experience (IME) in Bengaluru, Sukanya shared the sitar Ravi Shankar used in his last concert in Bengaluru. “We will be displaying this in our travelling exhibition,” says Sahana Mohan, Head of Content, IME. “We have received musical instruments, some of the costumes he wore at his concerts, many of his awards and citations, and some rare photographs and recordings. Three instruments that Ravi Shankar loved, sitar, tanpura, and surbahar will be permanently housed at IME.”

Sahana will host The Ravi Shankar Exhibit Virtual Tour on June 6 at 6 pm, on IME’s Facebook page. Sahana plans to walk through the gardens and instruments while she shares musical stories of the maestro. “I have a video recording of the Ravi Shankar exhibition as we have created interesting graphic panels.”

The travelling exhibition is housed in about 1,200 square feet earmarked for exhibitions at the museum. It was initially planned to be displayed for three months at IME after which it would be move to Delhi, Mumbai and other places in India. “Given the COVID-19 situation, the duration will have to be reevaluated.”

Sahana says work on the centenary exhibition for Ravi Shankar has been on for the last six months. “Although we inaugurated Ravi Shankar @ 100 in March, we could not keep it open to public as the lockdown was announced. While we hope to open the museum for the public soon, we thought a virtual tour would be a good way to show what we have.”

Ravi Shankar’s Bharat Ratna and citation, his Grammy awards, including the Lifetime Achievement Award and the Magsaysay Award will be displayed.

Some of his letters to Beatle George Harrison whom Ravi Shankar addressed as his son, will also be part of the exhibition. “Many people thought they were just friends or collaborators, but the relationship they shared was like that of a father and son.”

Sukanya brought the musical instruments and memorabilia to be displayed. “We appreciate the trust the family has in IME.” Not many people know that Ravi Shankar had a perforated eardrum. “Along with all his personal belongings, we have displayed the hearing aid which he wore. Many know he was a dancer, and we have some rare footage when he was part of his brother, Uday Shankar’s dancing days. People can travel back in time to the days when he started off as a dancer.”

Born Ravindra Shankar Chowdhury in 1920, Ravi Shankar was a musician, composer, dancer and also India’s best ambassador of the classical sitar. He transcended musical languages. Trained in both Eastern and Western musical traditions, he was awarded the Bharat Ratna in 1999. Having trained at Maihar by Sarod maestro Allauddin Khan for seven years, Ravi Shankar says in an All India Radio (AIR) documentary he imbibed “emotionally and intellectually the nuances” of the Maihar Gharana that helped him negotiate global musical phrases. His ear for composing is what Indians will always remember. After Ravi Shankar joined the Indian People’s Theatre Association, he composed the tune for Iqbal’s famous poem ‘Saare jahan se achha’ and worked on a ballet project for Indian National Theatre, titled Discovery of India based on Jawaharlal Nehru’s book. Around the same time Ravi Shankar worked as a music composer for two films — Khwaja Ahmad Abbas’s Dharti ke Lal (1946) and Chetan Anand’s Neecha Nagar (1946), and in 1955 composed music for Satyajit Ray’s Pather Panchali. He composed for the entire Apu trilogy. In 1949, Ravi Shankar took over as the music director of Vadya Vrind, the radio orchestra at AIR and moved to Delhi. The orchestra had young musicians such as Pt. Shiv Kumar Sharma and Chaurasia besides Ustad Alla Rakha on percussion. It was at this time that Ravindra Shankar Chowdhury became Ravi Shankar as the young maestro told announcers to introduce him that way. “And from then on the new name made my way to international destinations,” writes Ravi Shankar in his autobiography.