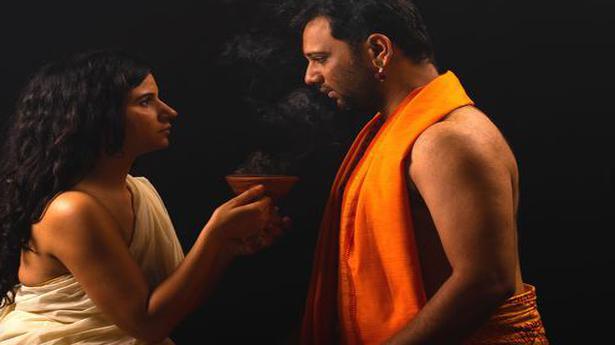 Red Polka Productions’ English play Chitraa, based on Rabindranath Tagore’s Chitrangada, went digital for the first time with the original cast on May 28. “When we released the play we had not expected the response we received,” says Prataya Saha, a Bengaluru-based independent and award-winning filmmaker, who with Shatarupa Bhattacharyya directed the play remotely. “The play has crossed 6,000 views and been shared more than a 100 times. “We asked the actors to use their best cameras, DSLRs or mobile phone cameras to shoot the video.”

Chitraa brings together the two media: theatre and film in a way that would otherwise be thought to be difficult. Shatarupa says: “We were clear that Chitraa is a play and not a film. The technical aspects of filmmaking was required to shoot the play, but theatrical elements have been retained in the play. Tagore took a lesser-known character from The Mahabharata, Chitrangada, and wrote a beautiful story. It is a period drama and this lends a theatrical element to it. Also we used the costumes designed for our previous productions.”

Chitraa is a millennial, English rendition of Chitrangada. The story of Chitrangada is from the Adi Parva of The Mahabharata. Arjuna, who has taken an oath of celibacy, roams the jungles and reaches Manipur, which is ruled by princess Chitra, a fierce warrior and archer. She meets Arjuna and falls in love with him, but Arjuna refuses to marry her. So Chitra seeks the help of God Madana to transform her into a beautiful woman. After her transformation, she comes to Arjuna again. Will Arjuna fall in love with her? “The play delves into pressure and expectations of a patriarchal society on women and raises some important questions,” says Prataya.

The play opened in 2018 in Bengaluru at Alliance Francaise. This was followed by shows in Rangashankara and other places before travelling to Hyderabad. “There have been multiple renditions of the play but this one is unique with its hybridized fusion structure: contemporary comedy interlaced with the untouched original romantic scenes by Tagore,” says Prataya, who says he trans-created the play. “I retained the original as it is. But I changed the romantic comedy. We are not used to the romantic comedy in Tagore’s time. I made more relatable to a contemporary audience.”

The idea to digitise the play came from one of the actors, Anshulika Kapoor. “These two-and-a-half months have been a time of turmoil for theatre artistes. I was seeing that people were doing webinars and video readings. Adversity gives you the best opportunity. So I thought why not digitise Chitraa. I suggested we do an online reading of the play. Then Prataya suggested we shoot the play. We were clear that it had to be a theatre experience and that film would only bring some of its essence to theatre.”

However, filmmaking was required to adapt the play to a digital platform. Prataya says: “International theatre organisations such as the Globe and Broadway started doing digital versions. We decided to take a leaf out of that format. Shatarupa and I brainstormed and chalked out a plan. We held rehearsals remotely over Zoom. Scenes were shot using iphones and DSLRs on a tripod. It was an intense period of six days of production. For light design, filmmaking was required. I could understand how the lighting would be, in which direction the actor would need to talk. We realised people are not used to watching a digitalised play. The audience on digital platforms is not necessarily a theatre-going audience. There were a lot of metaphors and poetry that goes into abstraction in the original, and we had to tone that down. We also toned down voice to suit camera. Also it helped that there were a maximum of two characters in every scene, had it been a multiple cast, it would have been a challenge. These were some of the subtle nuances we worked on.”

Shatarupa adds: “We introduced a sutradhar who takes the story forward. Everything you see in the digitised version has been constructed by the actors. We instructed them how to shoot and everything was arranged with whatever was available at home: candlelight, table lamps, mobile cameras.” Anshulika says doing the play before helped in co-ordination. “Shooting took two to three days and the editing by Abhishekh Saravanan took 10 to 12 days.”

Considering that attention spans are short on digital platforms, the play was shortened to 29 minutes. “We cut out many scenes and whittled down an hour of footage,” says Anhsulika.

Previous articleWhose hand is this anyway?
Next articleNepali climbers and support staff destitute after Everest closure