Home States Kerala Rohit Bhasi depicts characters from the epics in a contemporary setting on...
StatesKerala A beautiful Damayanthi stroking a swan and engrossed in a conversation on her cell phone is how designer Rohit Bhasi visualised the mythological character in a pen-and-ink drawing inspired from the mural art tradition of India.

“I enjoy imagining mythological characters in a contemporary situation and draw accordingly. So while watching people on cell phones, I wondered how our characters from the epics and mythology would have reacted today. Whether it be a lovelorn Shakuntala or a Sita pining away for Rama in Lanka, all of them would have probably used the mobile to express their feelings,” says Rohit, speaking on phone from Bengaluru, where he works as a designer in a leading MNC major.

He points out that in the famous story of Nala and Damayanthi from the Mahabharatha, the swan acts as the go-between in their romance. But in a modern-day setting, the swan has been replaced by the phone.

Another drawing of his shows the mythical King Mahabali on his annual visit to Kerala. Unlike the portly Mahabali one is used to seeing, his version is a slim and regal man with a hornbill (the State bird of Kerala) perched on his shoulder with a not-too-pleased look on his face. “So here we have a very modern, new-age version of the king. He has come down to the State and is enjoying his pazham pori. All of nature and his animal friends are happy to have him back (hornbill, being the State bird, has a moral obligation to be with him). However, Mahabali seems a bit sceptical at what he is seeing around him. Environmental issues and all that urbanisation don’t seem to appeal to him at all, hence that expression,” explains Rohit.

The artist makes it clear that his illustrations and designs are his creative interpretation of mythology, culture and people. He states: “The attempt is to celebrate stories and characters from across the ages and their relationships with the world around them. The colours and textures that I use, and the faces that populate my canvases are an organic extension of me and my sensibilities…”. 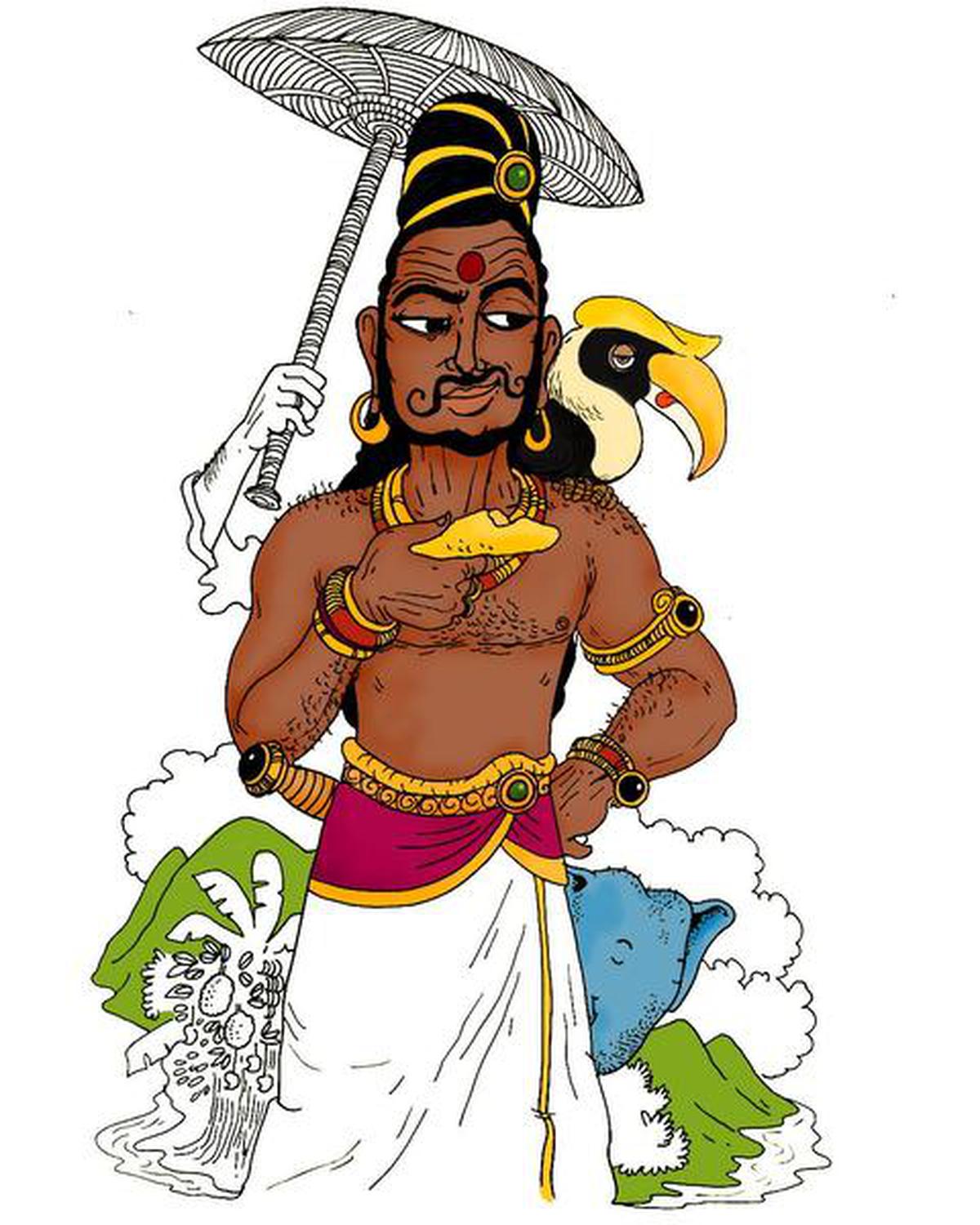 A new-age Mahabali on a trip to Kerala is not happy with the urbanisation in his former kingdom, says Rohit Bhasi about his drawing
| Photo Credit:
special arrangement

For instance, his painting of Ravana and Sita is his adaptation of the version of the Ramayana in which Sita is mentioned as Ravana’s long-lost daughter. “I wondered what would have happened if she had gone to Lanka as the king’s daughter. And what if Ravan appoints her as the royal princess! My work shows a homecoming scene. I wonder how that would have changed things in the epic,” he muses.

The writer in him embellishes some of his works with short descriptions that combine popular stories with his own flights of imagination and those result in stunning tales from a land of enchantment.

Talking about a lovely work that shows a sensuous woman in a pensive mood alongside a quizzical flamingo in a pool surrounded by lotuses, Rohit says that the woman could be Sita, Shakuntala, Damayanti or Matsyagandha. “In many of our epics and its sub-stories, the heroine is relegated to waiting and pining for her lover or partner while waiting for something momentous to happen, which, eventually, becomes the turning point of the story. And it’s a common theme across many such heroines — who all wait for their hero in shining glory to come and rescue them. Perhaps, the flamingo represents one of the jungle creatures that are quite used to being with humans among them or is he a rakshasa or a yaksha in disguise?” 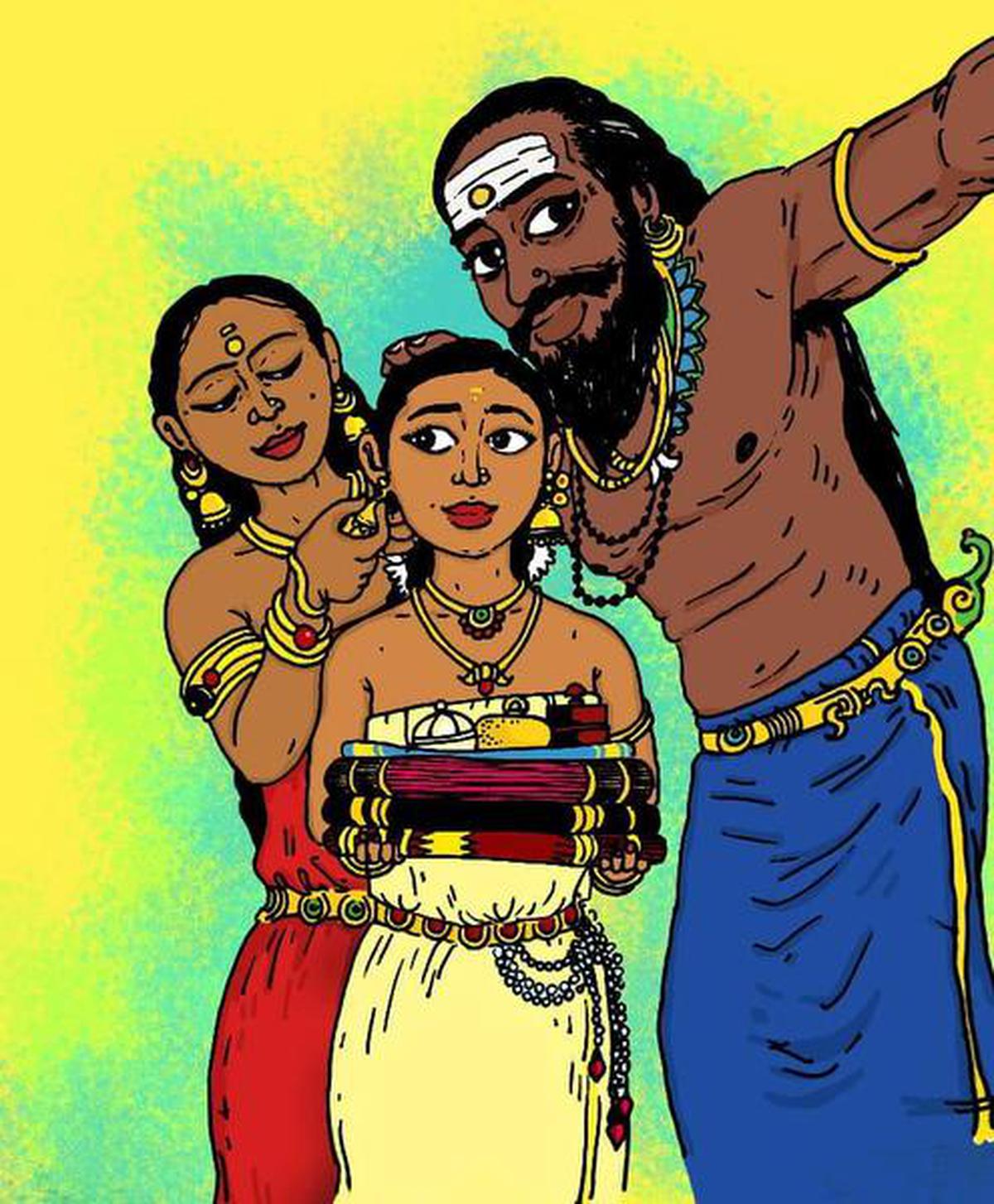 The media he chooses to doodle, draw and paint keep changing from paper and canvas to leaves, walls and doors. The enchantment continues.

Rohit’s interpretative drawings and paintings in pen and ink, watercolours and acrylics on canvas are posted on his Instagram handle and Facebook under the name indigoranges. Explaining the reason for choosing to post under ‘indigoranges’, Rohit says: “In 2008-2009, I was in a dilemma and to clear my mind I went on a trek. On my way back, I saw sunset paint the surrounding hills in all myriad shades of ochre, red, indigo, purple …It helped me make a decision and I returned and began a blog called indigoranges. Then came the Facebook page and Insta handle,” says Rohit.

Though many of his works are snapped up by fans of his and merchandise like mugs, T shirts etc have many takers, he still holds his job at the MNC for financial stability. 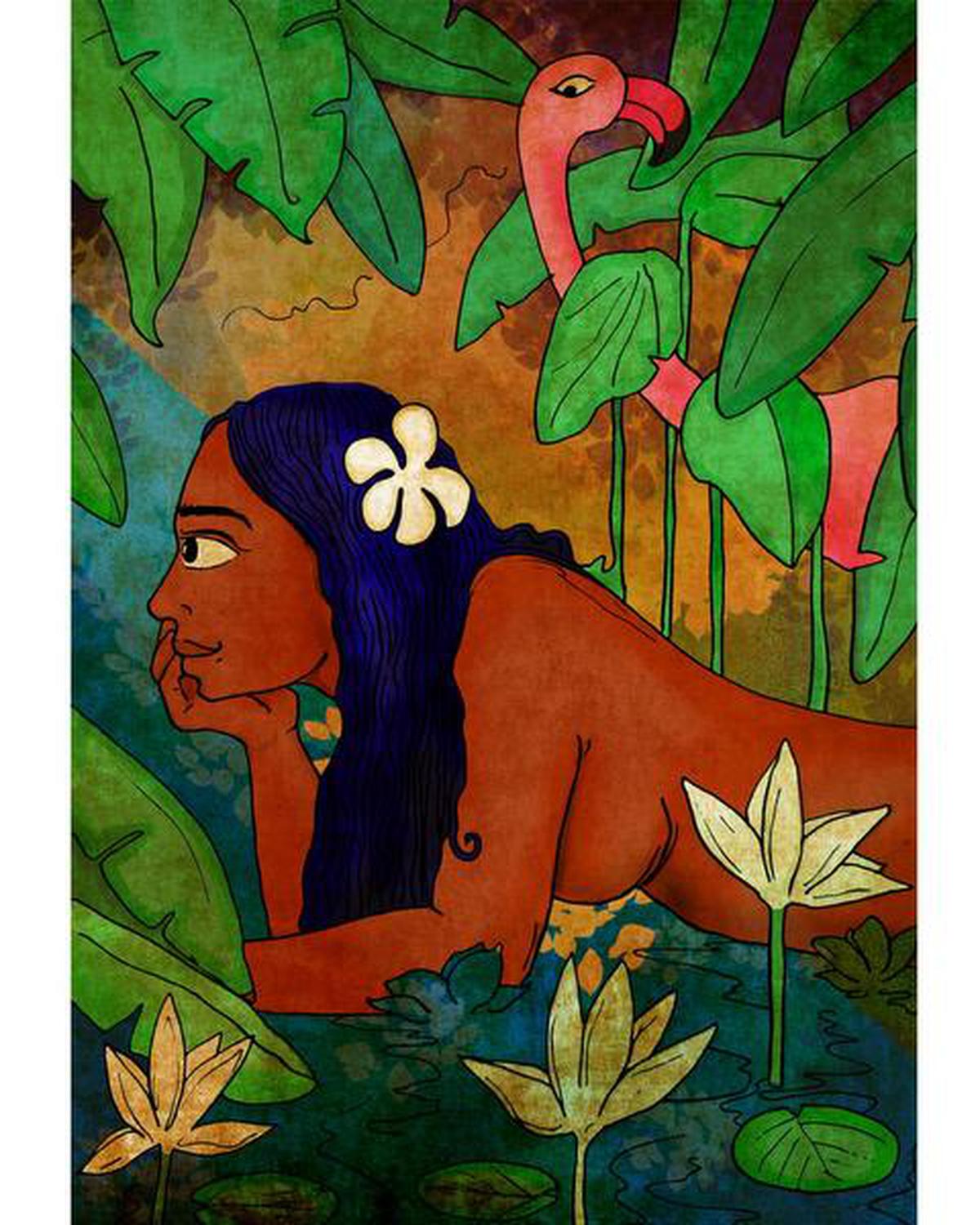 A painting by Rohit Bhasi shows Shakuntala in a pensive mood while a flamingo keeps her company
| Photo Credit:
special arrangement

An active participant of Bengaluru-based Still Space Theatre, Rohit says it was there that he came across different folk arts of India and that influence is evident in his drawings.

However, Rohit does not stop at neo takes on epic characters. Literature, folk tales and current events find a place in his prolific oeuvre. The drawings and paintings could be subversive, meditative, philosophical, insightful, political and sharp while his observations that accompany the work open new windows to age-old notions and traditions.

His observations on contemporary society are no different. Rohit’s lockdown illustrations are delightful and varied takes on life that depict scenes of families spending time together, of con men trying to make a fast buck with sob stories etc. One strip of eight illustrations is titled ‘The Indiranagar morning (lockdown edition).’ He also expresses his opinion on current events and spaces in his illustrations. ‘Loudshekharans’, his latest one on Bengaluru, is one such work, where he captures senior citizens gossiping, discussing, debating and boasting near Darshinis (a kind of breakfast joints) in the city. 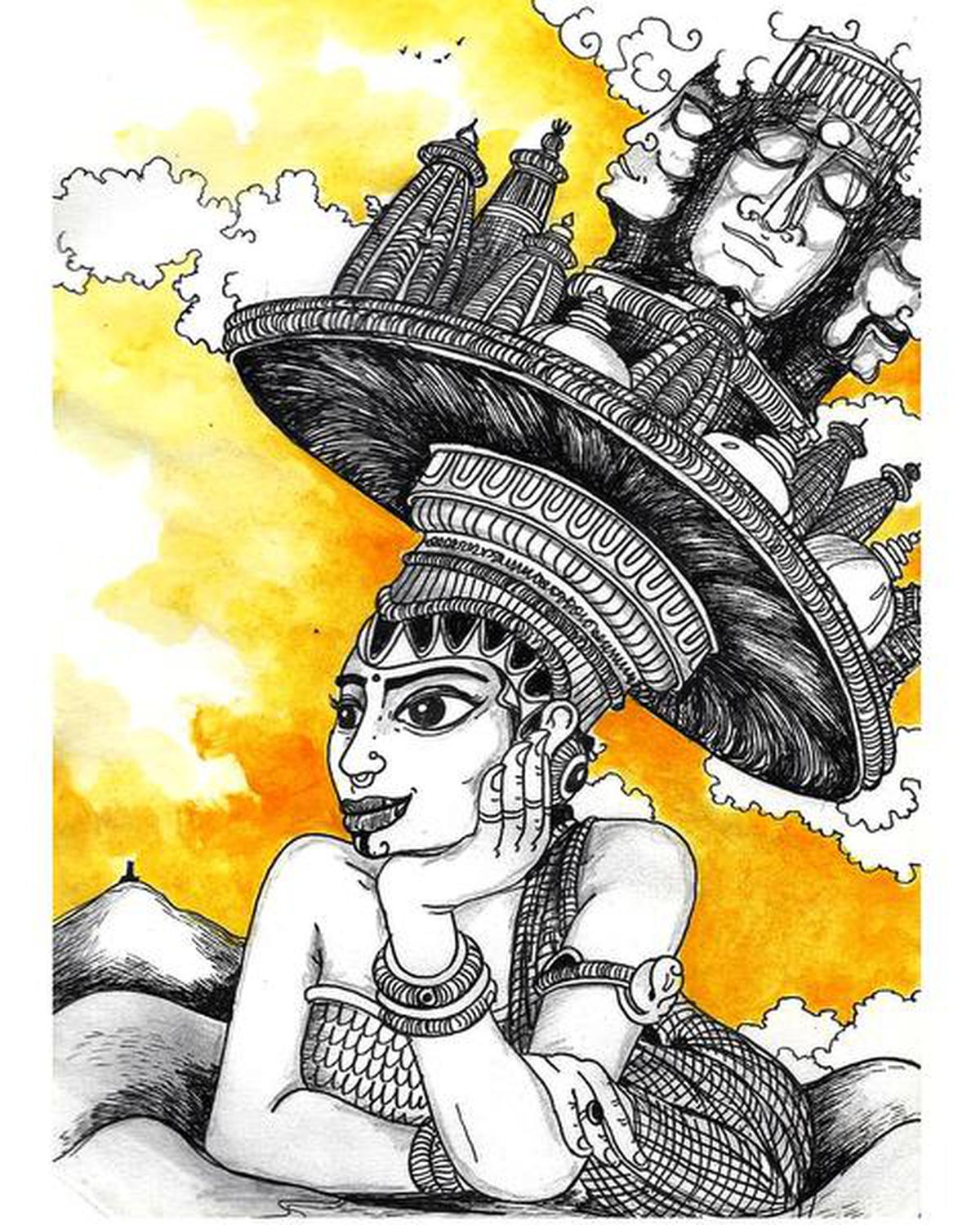 Although Rohit’s roots are in Kottayam in Kerala, he has studied and lived in several Indian cities as his father was in the Indian Air Force. For the last 15 years or so, Bengaluru has been his home.

Since the pandemic-created lockdown began, he has been busy with other members of Still Space Theatre to provide help and succour to theatre artistes who have been out of work for more than three months now.