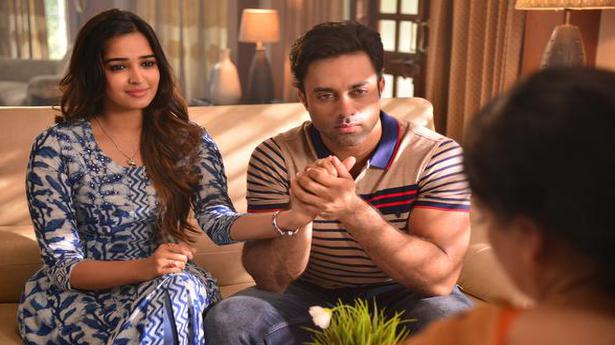 Director Lakshmikanth Chenna’s Run is the first OTT original Telugu film, made specifically for a streaming platform. Now streaming on ‘Aha’, Run has a crisp duration of 87 minutes and that’s one of its high points.

However, not everything that happens within those 87 minutes makes for a nail-biting watch. The psychological thriller opens like a whodunnit and gradually presents a bunch of odd characters involved in a curious turn of events where mostly, it’s tough to predict what happens next. When the big reveal happens in the later portions, these oddball characters make sense. But, while watching the drama unfold, it doesn’t evoke a sense of empathy for the plight of the central characters, which is so crucial in a murder mystery involving a doting couple.

In the opening portions, Shruti (Pujita Ponnada) and Sandeep Reddy (Navdeep) come across as the much-in-love couple. When Sandeep abruptly hands over his work presentation to a colleague to take time off for a lunch date with Shruti, to celebrate their wedding anniversary, the friend knows how much this means to Sandeep. At the café, the manager and the staff member know the couple’s favourite table and dishes.

The couple’s world is perfect. So perfect that, hypothetically speaking, they could be the sort of people who would post loving messages on Facebook. You get the drift… there’s trouble in paradise.

The lunch date never happens because Shruti is dead and Sandeep is a suspect. He tries in vain to prove his innocence. Some of the film’s oddball characters show up in a few minutes — friend Khaleel (Amit Tiwari) who seems dubious but helps Sandeep and a lady who always wears red and drives a red car (Bhanu Sri).

Most of the characters are fashioned in a unidimensional manner. A friend who looks and behaves like a typical commercial film antagonist keeps saying that he hates women, an elderly man is so protective of Sandeep that his actions seem unreal, and a cop threatens an encounter when the investigation is still on! When things get murkier and the odds are stacked against Sandeep, I too felt lost in the melee, trying to make sense of it.

The only sane voice towards the end is that of actor Shafi. Even the cops, played by Venkat (who’s making a comeback after years) and Sri Harsha don’t come across as well thought out characters.

Navdeep tries to shoulder the web film that gives him multiple shades to portray, which mainstream films haven’t given him in recent years. He gives the film his all.

On the technical front, Run falls short of the finesse required for a feature film. OTT films are at an early stage and in the times to come, we should see better ones in this space. By the way, Run has an open ending and if at all the makers were to leverage on it and make a new film, hopefully it will have a better discourse on mental health.

Previous articleHave travel restrictions quelled wanderlust? Writers and bloggers weigh in
Next articleWhen every order is a seed: How to buy produce in advance and aid farmer rescue projects