‘Run’ review: Merritt Wever and Domhnall Gleeson struggle to save a confused script 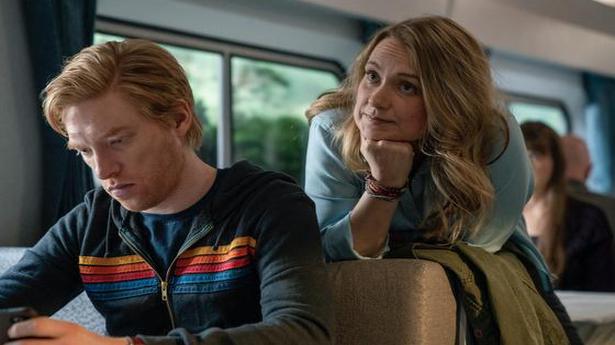 Writer-director Vicky Jones and collaborator Phoebe Waller-Bridge (of Fleabag and Killing Eve fame) never did follow through on their pact to exit a less-than-desirable situation if one of them whispered “run” to the other. But it did come in handy eventually, serving as the jumping-off point for Jones’ new series, Run.

Starring Merritt Wever (Unbelievable) and Star Wars’ Domhnall Gleeson (who gets to talk in his natural Irish accent), the seven-episode show is about unhappy and frustrated suburban homemaker Ruby Richardson and her ex-boyfriend Billy Johnson, a motivational speaker. Turns out Billy and Ruby made a pact in college: if one of them texted “RUN” and the other responded with the same, they would meet at Grand Central Station in New York and take a train across the country.

This initial set-up may have the audience thinking that the show will focus on the central characters ruminating on love, life and relationships. But Run steers clear of Before Sunrise territory. Instead, the rom-com transforms into a thriller mid-way.

The first few episodes show us Ruby and Billy on the train, rediscovering each other with the mixture of awkwardness, bickering, banter (it isn’t A-grade though), and sexual tension you would expect. Though they try to ensure that nothing pierces the bubble (Ruby imposes a moratorium on personal questions to that end), of course it doesn’t quite work. As it happens, Ruby has an entire family she has left behind and her increasingly frantic husband keeps trying to get in touch with her while Billy is being hounded by Fiona (Archie Panjabi), whom he terms his PA.

Upon reaching Chicago, they decide to stay the night and have a heart-to-heart while taking in an architecture boat tour (reminiscent of that scene in My Best Friend’s Wedding). Billy, meanwhile, withdraws all the money from his bank account, and heads off to meet Fiona while Ruby makes a friend; a woman called Alice.

Things start moving from here as we learn that Billy’s career has imploded and Fiona wants money for all the blood, sweat and tears she has poured into it. What follows is attempted blackmail, robbery, a chase, a dead body, and an escape from a crime scene.

The biggest problem with Run is that it doesn’t commit to one genre, nor is it able to blend the two successfully.

As a romcom, it requires the audience to root for the central characters to get together no matter the obstacles but as it turns out, Billy and Ruby aren’t very likeable nor are their individual characters delineated in a three-dimensional manner. Plus, Wever and Gleeson don’t share an off-the-charts chemistry. This is made more evident by the awkward yet endearing chemistry between Laurel, a quirky taxidermist played by Waller-Bridge (who also serves as executive producer on the show) and Chief Deputy Sheriff Babe Cloud (Tamara Podemski) who both enter the proceedings in the fifth episode.

As a thriller, it just isn’t fast-paced enough nor are there enough plot machinations to up the stakes. Pity since so much of the action takes place on a train, which could have been exploited in this regard. At the end, Ruby discovers Billy’s reason for texting her (it’s admittedly bad) and then the show comes to a rather abrupt halt.

Perhaps, the makers were expecting a second season. But as of now, that is reportedly not on the cards.