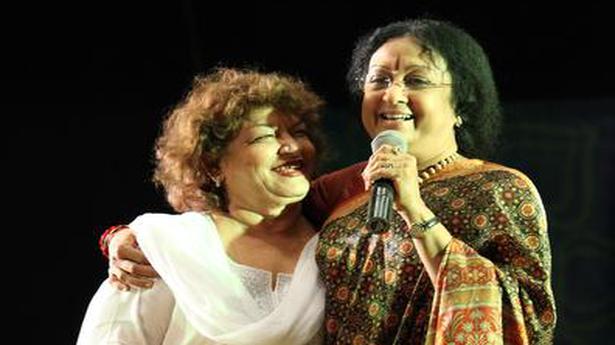 In the surfeit of obituaries eulogising Saroj Khan’s contribution to Bollywood, many have forgotten her dalliance with classical dance. “In Bollywood, she was working with human anatomy, here she worked with the aesthetics of a dance tradition,” says film director Sharada Ramanathan, who got her to choreograph her debut film Sringaram (2007). The film not only fetched Saroj Khan her second National Award but also helped her breach the barrier between the classical and the popular. “Sarojji was my plan A and plan B for Sringaram. The film was about a sadir dancer, the dance of devadasis from which Bharatanatyam, which is much more structured, evolved. I wanted somebody who could capture its aesthetics on camera and take it to the present generation. And I could not think of anybody but Saroj Khan.”

Sharada was cautioned with tales of the sought-after choreographer’s temperament and eccentricity, but she had decided to take a chance and didn’t actually encounter anything of the sort. “For Sarojji, Sringaram was like a homecoming, where she connected with her early days spent with Sohanlalji, who taught her the basics of different dance forms, including Bharatanatyam. She worked with four generations of actors, starting with Vyjyantimala and Padmini. She would say that with Sringaram, life had come full circle. I had seen her crying, it was cathartic for her. But she never made a show of it. I experienced it because I was there.”

Coming from the sets of Bollywood, choreographing a film steeped in classical tradition was not easy, but Saroj was up for the challenge with her wit intact. “When I sent her the compositions of Lalgudi Jayaraman, she called up to say, ‘What! you want me to do a padam.’ But, then she did it.” Sharada recalls the conversation between Lalgudi Jayaraman and Saroj. “She would tell him in jest, ‘Choreographing your compositions for the camera is torture.’ And the legend would just smile. Next moment, she would ask, ‘when will we work together again’.”

Sharada recalls how once Saroj called up when she was doing her recce and research in Thanjavur. “Excited, she said that she too wanted to smell the soil of the cradle of dance. She quickly took a flight, for which she made her own arrangements, and somehow reached Thanjavur. She asked only for a room with AC. She spent three days there talking and taking notes from Chidambaram Kamalambal, a veteran Sadir dancer, who was around 101 years old at that time.”

Sharada, who would translate their conversation, remembers how Kamalambal said, “‘Saroj, find me a young man whom I can grow old with. To which, Sarojji replied if I find one, why would I give him to you. And Kamalambal retorted, ‘Right! If he would see me, he won’t stay with you.’”

At work, Sharada says, she was very punctual and blunt in making the other person know if he or she was breaking the timeline set by her. “She was very soft with Aditi (Rao Hydari) and Hamsa (Moily). She would say yeh Bollywood actors jaisi nahin hain.”

By the time shooting ended, she would tell Sharada, “Two directors have challenged me the most: Sanjay (Leela Bhansali) and you.” The film, says the director, was accepted well by the purists. “The National Award was a validation that Saroj brought out the soul of the dance form.

“She never asked for payment. Once she planned to fly down from Amsterdam, where she was shooting with Aishwarya Rai. I asked how she would do that and she said she would manage. When I asked about her fees, she replied in her trademark style, ‘it’s more than the budget of your film’.”

In the last few years, the legend was asking for work from her favourite directors and Sharada was one of them. “We were collaborating on a project drawn from an epic. In fact, she had sent me a few ideas. I will credit her when it materialises,” she says. Like they make films for the stars, Sharada says, Bollywood should have made a Saroj Khan musical. “She deserved it.”

In 2009, Saroj Khan was invited by Sri Krishna Gana Sabha for its prestigious Natya Kala Conference during the annual Margazhi music and dance festival. Senior Bharatanatyam dancer-guru Ananda Shankar Jayant, who was the convenor of the conference that year, remembers eyebrows being raised when the news reached the closed circle of classical dancers that Saroj Khan had been invited to perform with her students. “But on the day she took the stage, it was jam-packed!” she chuckles. “It was part of Dance Matters, the theme that year, where I wanted to bring all things related to dance to centre stage.” Ananda created a matrix and one of the tiers of that matrix was the sweep and stretch of dance in television and cinema, and its overriding influence thereof. “The idea was to take dance out of brackets. We all dance to engage the audience in some way and when a true artiste is immersed in dance, the boundaries dissolve.”

This, Ananda says, happened that day during the session on choreography in films. “First, her students performed to her film songs. Then Sarojji, immaculately dressed in white, was persuaded to demonstrate. She danced to ‘Mar Dala’ (Devdas) and what should I say, unhone humein maar hi dala (she overwhelmed us).”

Sixty-one years old then, Ananda says she may not have had the perfect physique, but “one could feel the grace and experience the emotions…” She received a standing ovation. “And Padma Subrahmanyam rushed to the stage and hugged Sarojji. She said one of her movements was from the chaaris of Natya Shastra.” Coming from one of the icons of Bharatanatyam and scholars of the treatise, says Ananda, was the defining moment of the day.

Saroj Khan belonged to a generation that enacted lyrics through dance. So ‘Mere hathon main nau nau choodiyan hain’ had to be enacted and also ‘Dhak dhak karne laga’. There was no fast intercutting of shots to hide the flaws of the actor and/or choreographer. In an interaction with this journalist, Saroj Khan had said she could not be gimmicky or vulgar or rely on costumes to hold the attention of the audience. “I come from the tradition of Master Sohanlal, who choreographed, ‘Hothon pe aisi baat’ (Jewel Thief), one of the best choreographies of Hindi cinema, where he used circular tracks and dynamic cuts to take the song to a crescendo.” Saroj was his assistant then and rehearsed with Vyjayantimala who recorded the song in one take.

For her, a Madhuri Dixit or a Sridevi were just a medium to reach young girls in the audience. “I can’t repeat my steps because the moment a song becomes a hit, young girls will copy it. I have to give them something different every time. Otherwise, I will fail them in their weddings and parties,” she said.

Although there is no evidence of a linear evolution of Bharatanatyam over the last 2,000 years, Tamil and Sanskrit texts confirm its ancient roots....
Read more
Dance

What does practice mean in dance

The meaning, modalities and methods of dance practice have over the years begged for some spotlight, even as the wash of performance aspects in...
Read more