Saroj Khan: The choreographer who danced past the glass ceiling 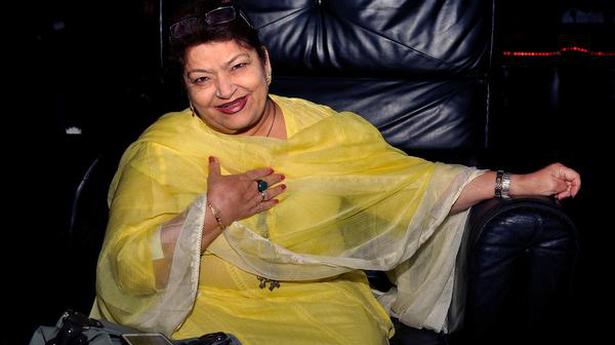 In her more than four-decade-long career, Saroj Khan not only broke the glass ceiling in an area dominated by men in Hindi cinema, but also propelled generations of female actors into the spotlight through her catchy dance moves, with actors Madhuri Dixit and Sridevi being the two best examples. Through songs like ‘Hawa Hawaai’ and ‘Ek Do Teen’, Ms. Dixit and the late Sridevi found unprecedented fame, thanks to Khan’s evocative choreography, which was at once traditional and modern, folk and contemporary.

Khan, 71, died on Friday morning following a cardiac arrest. She was admitted to Bandra’s Guru Nanak Hospital hospital on June 27 after she complained of trouble with breathing. The mandatory COVID-19 test done at the hospital showed a negative result. Her funeral was held on Friday at a cemetery in Malad.

Worked her way up

Born in 1948 to parents who migrated from Pakistan during the Partition, Khan started her career as a child artiste at the age of three, and later became a “background dancer”, shadowing the moves of lead actors. She worked her way up and became the first woman chief choreographer in Hindi cinema, delivering some of the biggest hits of the 1980s and 1990s such as ‘Mere Hathon Main’, ‘Choli Ke Peeche’ and ‘Dhak Dhak Karne Laga’. Khan and Ms. Dixit collaborated on several songs, including ‘Dola Re Dola’, for which Khan won her first National Award for Best Choreography.

“I’m devastated,” Ms. Dixit wrote on Instagram. “Sarojji was part of my journey since the beginning. She taught me a lot, not just about dance but so much more.”

Khan choreographed some of the most well-known actors, including Amitabh Bachchan, Shah Rukh Khan, Hema Malini, Akshay Kumar and Aishwarya Rai, and was fondly known as “masterji”. She won three National Awards for Best Choreography, including for songs like ‘Yeh Ishq Hai’ in Jab We Met. The song was shot in Manali, using local Himachali women as “background” dancers.

“What I remember most is that when the entire shooting of ‘Yeh Ishq Hai’ got over, she danced solo for us, and that’s a memory I’m going to have of her: wearing Hawaii chappal and doing the dance better than anybody could have imagined doing,” said Imtiaz Ali, director of Jab We Met. “She brought a certain art to the style of dancing in cinema which was both contemporary and high-class.”

The veteran choreographer was widely known for elevating the meaning of the lyrics through her dance. She not only highlighted the emotions of the song but also contributed to the characterisation of the protagonists. “I was a newcomer director and she was a respected choreographer. She had a sense of kindness. I could tell her everything about the narrative and there was nothing she objected to, and she took the course of the narrative into the song. She knew she had to give something special in cinema,” recalled Mr. Ali.