Senate, House Set To Rumble Over Who Controls Nuke Budget 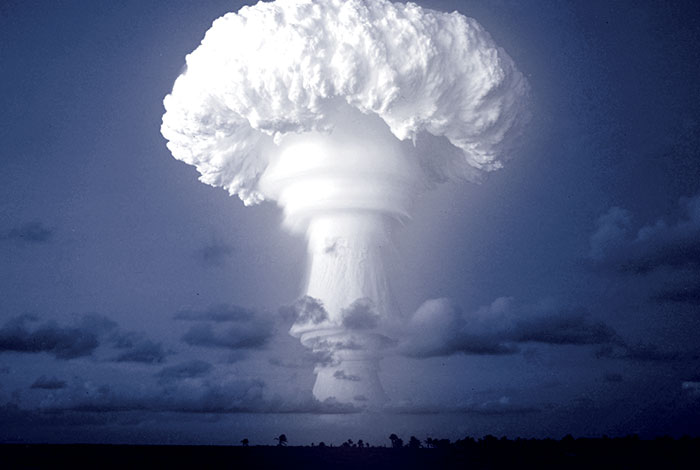 WASHINGTON: The two sides of the Capitol are set for a fight on whether DoD should be given a stronger hand in developing the annual budget for nuclear weapons development — a fight that will be complicated due to the diametrically opposed positions of the committees involved.

The House Appropriations Committee’s 2021 budget bill for the Energy Department would block the use of funds for DoD’s Nuclear Weapons Council to participate in development of the National Nuclear Security Administration (NNSA) budget. The bill says in section 309 that no NNSA or any other DoE funds may be used “in furtherance of working through the Nuclear Weapons Council to guide, advise, assist, develop, or execute a budget for the National Nuclear Security Administration.”

The provision seeks to prevent the Nuclear Weapons Council “from further encroaching on the development of the NNSA budget,” Kingston Reif, director of arms control and threat reduction policy at the Arms Control Association, told Breaking D.

That is a direct slap at the Senate Armed Services Committee (SASC), which is pushing to give the Defense Department — for the first time — levers to influence NNSA’s nuclear weapons development budget. One of the longest-standing policy decisions governing nuclear weapons — not their delivery systems –is that funding and work would be controlled by civilians, in this case the Department of Energy. SASC can only engage in oversight of “national security aspects of nuclear energy.”

Despite being forced to compromise with leaders of the Energy and Natural Resources Committee during the Senate floor vote July 2 on a package of amendments, SASC Chair James Inhofe was able to protect a provision in the 2021 National Defense Authorization Act (NDAA) that gives DoD budgetary review rights.

Energy Committee Chair Lisa Murkowski and Ranking Member Joe Manchin, along with Sen. Maria Cantwell, threatened to block the NDAA and were able to strip one section of the bill, Section 3111, that would have allowed DoD to veto Energy Secretary Dan Brouillette’s budget decisions. However, the compromise with Ihnofe left another provision, Section 1652, that would allow the Nuclear Weapons Council a chop on the NNSA budget before it reaches Brouillette’s desk.

“It’s not as ludicrous as the original Section 3111, but would nonetheless significantly expand the budget role and authority of the Nuclear Weapons Council,” Reif said.

However, a SASC aide said the provision in Section 1652 doesn’t do much more than clarify the Nuclear Weapons Council’s current role.

“Section 1652 just provides more detail than the existing section of code it is replacing (10 USC 179(d)(10)) but is consistent with the responsibilities of the Nuclear Weapons Council as laid out in law for many years,” the aide told Breaking D today in an email. “It is also consistent with revisions to section 3111 made by the Cantwell/Manchin amendment. Note that, as many have pointed out, the original version of 3111 would have effectively allowed DOD to make changes to the NNSA budget before submittal to OMB. Extant 10 USC 179(d)(10), section 1652, and section 3111 as amended simply specify points in the process for coordination and approval, consistent with current law.”

As if the disagreement on what SASC is trying to do wasn’t complicated enough, the issue of who is expected to do what to whom in setting the rules is just as complicated. The SASC and the House Armed Services Committee (HASC) set DoD policy via the NDAA — just as the Senate and House Energy committees set DoE policy. But the HAC has the power of the purse, providing funds for DoE and DoD via its energy and defense subcommittees; as does its Senate counterpart. That means there are four committees with fingers in the pie — all with differing positions on the issue of how NNSA’s budget should be put together.

The HASC, for its part, has not included any language on the issue — so it is unclear what the full House will do when the NDAA comes up for a vote; and more unclear about how the House might come down in conference committee with the Senate. Of course, the safe bet is that the HASC doesn’t want to change things since it did not include any language. That said, House Democrats (who are the majority party) have expressed some concerns about the powers already vested in the Nuclear Weapons Council, according to one Hill watcher, and what they see as a lack of transparency in its decision-making. Indeed, the HASC in its 2020 version of the NDAA asked for more regular briefings by the council.

On the Senate side, where the Republicans hold the majority, there has been bipartisan push back on the SASC language. Opponents include Sen. Lamar Alexander, who chairs the Senate Appropriations subcommittee on energy and water, making it unclear if the SAC will go along with the SASC — as is normally the case on the defense budget.

Indeed, Alexander signed a July 1 letter to the SASC, obtained by Breaking D, opposing any transfer of NNSA budget authority to DoD. The letter says:

“As currently written, the Senate NDAA bill would strip the Secretary of Energy of the ability to manage some of the most sensitive national security programs that account for almost half of the Department’s budget. Such changes could impede accountability and Congressional oversight, as well as imperil future funding for other critical DOE responsibilities such as promoting scientific and technological innovation, managing our National Laboratories, sponsoring basic research in the physical sciences, and ensuring cleanup of the nation’s nuclear weapons complex.”

The letter, however, was written before Inhofe and Murkowski reached their NDAA compromise. The upshot? It’s just too soon to predict which way the debate will go.