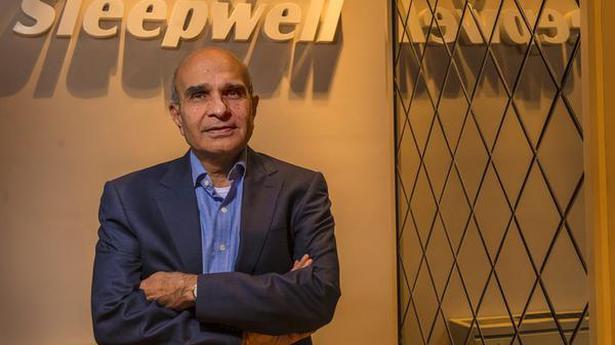 With almost 80% of its stores now open, albeit with reduced working hours, Sheela Foam — the makers of the Sleepwell brand of mattress — is witnessing 55-60% business returning with the easing of the lockdown, driven by pent-up demand, a senior company official said.

However, the company feels there is a need for measures on the demand side for a turnaround.

“About 20% of our stores are in the red zones. Our estimate is that business is back at 55-60% due to pent- up demand,” Rahul Gautam, MD, Sheela Foam, told The Hindu. “It is slowly climbing… going through stops and starts.”

He added the company was witnessing demand pressure in some bigger towns such as Mumbai and Delhi, which have seen an increase in the spread of COVID-19.

Mr. Gautam said while the government had introduced measures to aid the supply side, there was also a need to boost demand.

“The government has been doing a lot on the supply side but our view is that measures are needed on the demand side as well… if that is not taken care of… as long as there is no demand, opening of showrooms will not help; there would not be a turnaround,” he said.

The company also announced that it would donate 10,000 bedding units consisting of mattresses, pillows and beds for the world’s largest isolation facility coming up in New Delhi, as part of its corporate social responsibility.

Mr. Gautam said the specially-designed beds can be assembled in under five minutes, are water-resistant and made of 100% natural and recyclable corrugated hardboard.

Likewise, the mattresses have been designed for long hours of sleeping and sitting and come with a special cover for easy wiping and sanitising, according to Mr. Gautam.

“These months have helped us forget the year before the COVID-19 year when there was a slowdown…The year (FY20) was not as good as what we planned it to be,” said Mr. Gautam.