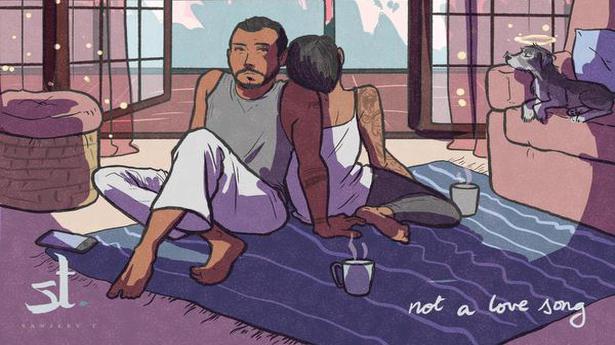 The lockdown may have kept Sanjeev Thomas indoors, but he did not let the restrictions silence his music. The singer-composer decided to meditate upon the “many moods” of the lockdown, giving shape to his next indie album. On Friday, the music director released the first single, ‘Not a Love Song’, from his upcoming album, Future.

“Future is a Lo-fi (genre) soundscape of sampled and live sounds, expressing our emotional state during the lockdown. It samples sounds from old Indian tracks, and ‘Not a Love Song’ borrows chiefly from Tamil snippets,” says Sanjeev, whose last Mollywood project as composer was the Vineeth Sreenivasan-starrer Manoharam. ‘Not a Love Song’ is released on several music streaming platforms.

The Kottayam-native explains what inspired him to come up with such an experimental track. “I had plans to work on a new album in the beginning of the year and was scouting artistes for collaboration. But then the lockdown due to COVID-19 came and I realised that, for now, perhaps I can make music only from my home,” says Sanjeev, who has played the guitar for AR Rahman.

For ‘Not a Love Song’, Sanjeev says he attempted to take a “realistic look” at the theme of love seen through the lens of the lockdown. “The soundscape explores how we see love in such a scenario,” he says over phone from Chennai. The composer collaborated with Salem-based artiste Native Indian (actual name Siva Baskaran), who wrote the lyrics in English and sang the number.

Sanjeev plans to release six tracks in all for Future, exploring “varying moods and different emotions during the lockdown”, all within the genres of Lo-Fi and Chill-hop and in collaboration with several artistes. “I feel that Lo-fi has sort of become a genre of the season as things have been moving pretty much slow,” says the musician, who founded the music band Rainbow Bridge that once featured Benny Dayal. Next up in Future is a track titled ‘Mazhai’ capturing the evocative feel of rain during the lockdown and will feature a female voice.