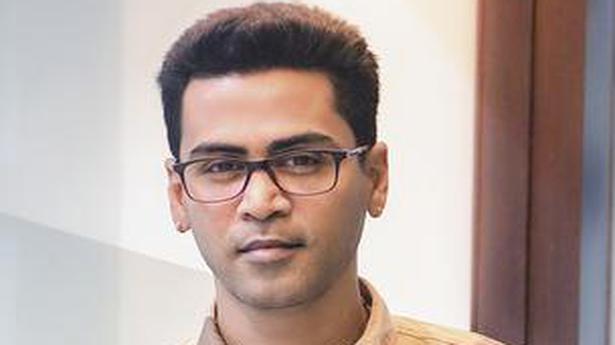 Krish has been having a rather interesting musical practice for a while now. He would re-watch an old Tamil film and mute the music during certain situations, and ask himself: ‘If you were the composer, what would you do here?’

He tried doing that specifically with a song situation from 1993 Tamil film Uzhavan, which had music by AR Rahman.

“There are a thousand hero intro songs, but when you get a complicated situation like the superb ‘Kangalil Enna Eeramo’ song sequence in the film, what do you do? I try my own musical spin,” says Krish.

All that, combined with his independent musical ideas, have resulted in a ‘song bank’ that has about 200 tracks. “Some musicians prefer having rough song sketches, but I get very disturbed if I don’t finish a composition. My tracks are all finished ones.”

He has not yet dug into this bank for his current projects, but all this experience has come in quite handy now… for, the singer has turned composer. His début work was showcased in the recent short film Yashoda, directed by Sripriya, but there is more work coming out of his studios. “I’m working on a Vishnu Vishal film, for which I have done six songs. It will be a musical subject. There are two other projects for big banners that I have already signed. Hopefully, 2021 will see a couple of these releasing,” says Krish, who is popular for tracks like ‘June Ponaa’ and ‘Oru Chinna Thamarai’.

He is enjoying his new role as composer and believes that his USP is the varied musical influences he had while growing up. “I grew up in the US, listening to music coming out of there. But when I was home, my parents were listening to MS Viswanathan songs. All these varied sounds I heard made me take up music. I have always nurtured composing tunes on my own,” says Krish, who has been using the lockdown to re-discover his painting skills and entertain his seven-year-old daughter.

He is also looking to explore more opportunities on the acting front: Krish was last seen in a role in Suriya’s Singam 3 in 2017. “I’m keen on acting too, if the opportunity presents itself.”