Home ENTERTAINMENT Reviews ‘Space Force’ review: Out of space and definitely out of our minds
ENTERTAINMENTReviews

‘Space Force’ review: Out of space and definitely out of our minds 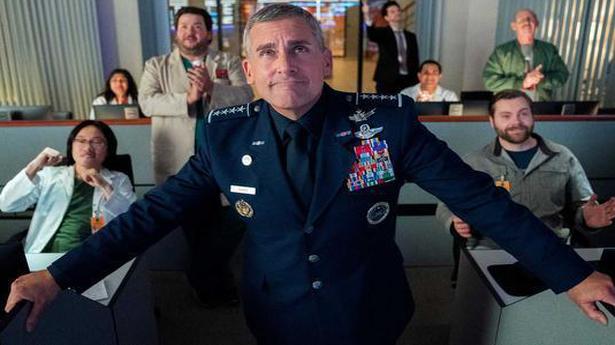 Though wildly popular, an understatement if at all, The Office actually began on very shaky footing. The first six episodes of the first season stumbled about before finding a strong focus in its sophomore return to television. The same happened to Parks and Recreation. But those were different times, audiences were slightly more forgiving before writing off shows entirely. In 2020, a single misstep could cost an earnest effort its all.

After their spectacular partnership on The Office, creator Greg Daniels once again collaborates with comedy maven Steve Carell in Space Force. The ten-part Netflix series explores America’s aggressive need to dominate outer space before other countries. Ironically, the US actually has a real military faction, of the same name, with a logo that’s eerily reminiscent of Star Wars aesthetics. Hopefully, the real-life project won’t encounter half as many capers as Daniels’ and Carells’ show presents. Even if Space Force does poke fun at real situations.

It’s a tried-and-tested formula – like in The Office – to revel in the monkey business at work with outlandish characters. Space Force is similarly helmed by Mark Naird (Carell) who is tasked with heading a new section of the armed forces that earns him a seat at the Chief of Staff’s table. His unyielding belief in Space Force’s projects often clashes with logic and even more so with the personal situation at home. A wife – Lisa Kudrow – is in prison, convicted of mysterious wrongdoings. A daughter – Diana Silvers – is perpetually battling teenage angst. At work, Naird is forever at loggerheads with civil scientist Adrian Mallory (John Malkovich) and his team.

Space Force has been highly anticipated, courtesy its cast and creator. But try as it might, and it does, the show keeps swinging and continuously missing. It enthusiastically oscillates in any and every direction that could possibly result in success. Yet, the show doesn’t stick around long enough for its audience to settle comfortably. Even resolutions arrive too early, with little inconvenience.

Though comedy is at the core of Space Force, it’s not cohesive enough to carry forward into the next frame. Ridiculous situations abound, but they’re never pushed to the limit, a virtue Daniels and Carell are known for. Well-defined characters with their own kooks exist. But their place in the narrative falls short of engaging with an audience. In spite of a steady onslaught, the comedy only bubbles forth in fits and spurts.

The show could find a stronger ground to stand on in season two. But by then – since it won’t be available for at least a year – the damage will only embed itself deeper. In the case of Space Force, it’s a step into outer space but a giant leap out of our minds.

Previous article‘Choked’ movie review: Anurag Kashyap delivers a chaotic take on demonetisation
Next articleBarry Diller calls for an end to ‘absurd’ earnings guidance, says his firms won’t do it anymore