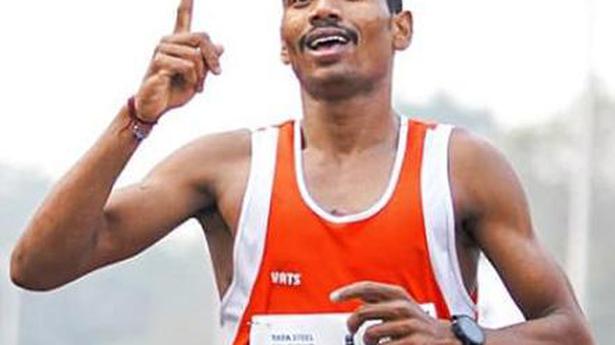 From the paddy fields of Gajapathinagaram in Vizianagaram (Andhra Pradesh), marathon runner Srinu Bugatha has embarked on a journey to chase his dream of making it to the Tokyo Olympics.

The 27-year-old Srinu, born in a farmer’s family and at home taking a break from the Army Institute of Sports (Pune) because of the lockdown, is conscious of the huge challenge ahead. But Srinu is also confident given his consistent performances, including a personal best gold medal winning effort of 2:18.36 in the Mumbai Marathon in the Indian Elite category this January (Olympic qualifying norm is 2:11.30).

He is disappointed at missing an Olympic qualifying event in Spain this March and also the opportunity to train in the Rift Valley in Kenya which produces 90% of the top Kenyan athletes.

“With the Olympics postponed to next year, I hope I will get a few more chances to qualify,” he said in a chat with The Hindu.

“I am grateful to my senior officials in AIS and to Rajesh Vetcha, founder of Hyderabad Runners, for all the support. Hopefully, I will make the cut,” said the runner who covers a distance of 180kms on an average very week in normal times and now in lockdown about 130kms since Vizianagaram was for a very long time in the green zone.

Coach Subedar K.C. Ramu at AIS (himself a former Indian marathon champion) said that they are waiting for the new Olympic norms after the postponement and will revisit the training programme soon to ensure that Srinu is back at his best. “I am sure he will make a big impact,” he added.

On the road to qualification, Srinu needs to break the 42-year-old record of 2:12.00 set by the great Shivnath Singh in 1978 at Jalandhar.

Some of Srinu’s major wins include a full marathon bronze in the Indian category in the 2018 Mumbai Marathon, followed by a gold each next year in the half-marathon in the same event, the Airtel Delhi Marathon and the TCS 25K Run in Kolkata. Srinu, who watches videos of African greats like Kenenisa Bekele, Eliud Kipchogu, is making all-out efforts to leave his stamp in the world of marathon.