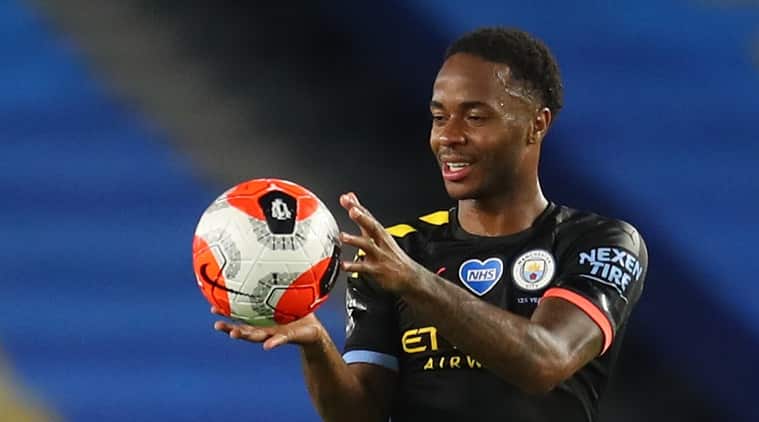 
Manchester City’s Raheem Sterling with the matchball after scoring a hat-trick after the match (Source: Reuters)

Raheem Sterling struck a hat-trick as Manchester City crushed Brighton 5-0 at the AmEx Stadium in the Premier League on Saturday.

Second-placed City had lost their previous three away games but never looked likely to extend that streak against a Brighton side that struggled from the outset.

Sterling, who has now netted 27 goals in all competitions, opened the scoring in the 21st minute when he collected a nod-down from Gabriel Jesus outside the box and superbly drove it into the bottom corner.

Jesus made it 2-0 just before the break, turning in from close range after Rodri had headed a corner goalwards.

City took total charge in the second half, with Kevin De Bruyne striking the post in the 51st minute and two minutes later Sterling heading in a fine curling cross from Riyad Mahrez.

Bernardo Silva made it four and then Sterling bundled in the fifth in the 81st minute, the ball bouncing in off his head after he had fallen to the floor.

The result ensures that City, on 72 points, will finish in the runners-up spot, although they will have to wait for the decision from the Court of Arbitration of Sport (CAS) on Monday to find out if they will be able to compete in next season’s Champions League.

City have been banned from European competition for two years by UEFA but appealed to CAS in a bid to overturn the decision.

“We’ve qualified for the Champions League which was the minimum requirement for this club. We won it on the pitch and hopefully on Monday UEFA will allow these players to play next season. They deserve to be in the Champions League,” said City manager Pep Guardiola.

Whatever the outcome of that ruling, City remain in this season’s competition with the second-leg of their last 16 game against Real Madrid coming up in August.

“I was pleased with everything tonight – the result and the levels we reached. We are now at a good level and are ready to play the last games of the Premier League and in the Champions League,” Guardiola said.

Sheffield United’s David McGoldrick scored twice as they stunned Chelsea with a 3-0 win at Bramall Lane on Saturday, loosening the visitors’ grip on a Premier League top-four place.

Chelsea’s Champions League qualification hopes were badly weakened by the result as they could fall to fifth if Leicester City beat Bournemouth on Sunday and Manchester United overcome Southampton a day later.

A fourth straight home win in the league for Chris Wilder’s side, however, boosted their hopes of a first-ever appearance in the Europa League as they moved up to sixth on 54 points.

Forward McGoldrick had not previously found the net in the Premier League since winning promotion with Chris Wilder’s team but opened the scoring when Oli McBurnie’s shot was pushed out by Chelsea keeper Kepa Arrizabalaga and the Ireland striker fired home.

McBurnie then doubled the lead in the 33rd minute with a powerful, angled header from an Enda Stevens cross.

The 32-year-old McGoldrick wrapped up the win in the 77th minute, slotting home after Chelsea defender Antonio Rudiger failed to deal with a low ball from Lys Mousset.

Chelsea manager Frank Lampard was scathing in his criticism of his team’s performance.

“They were better than us, physically, in the mind and with the ball. So you lose the game,” he said.

“They were stronger than us. You feel and hear every noise and all I could hear was Sheffield United voices. They are a good team. If you come here and perform below par this is what will happen.

“Disappointing. Mistakes. You analyse all season and review and move forward. We need to put that to bed quickly and fight for the top four. I learned a lot and I won’t forget that,” he said.

McGoldrick said his barren run had not perturbed him.

“I had told the lads ‘don’t worry when it comes I will get a brace’,” he said.

“Thirty-five games in and the league table doesn’t lie. That was us at our best today.”

“I had told the lads ‘don’t worry when it comes I will get a brace’,” he said.

“Thirty-five games in and the league table doesn’t lie. That was us at our best today.”