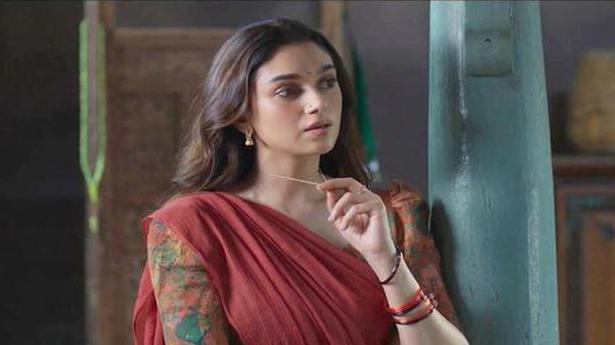 Whirling dervishes, a protagonist named Sufi, background music with the word ‘roohi’ thrown in at regular intervals everytime the sufi’s lady love appears on screen, a clarinet-playing old sufi saint in a Jinn mosque: all the elements that one could associate with a mystical romance are in place in Naranipuzha Shanavas’s Sufiyum Sujatayum, streaming on Amazon Prime now. But, all the visual elements being there would still not make up for the absence of a film’s ‘rooh’ (soul), a script with well-etched characters.

Ironically, much of the work in burnishing the movie’s sufi credentials remains limited to the surface, in its visuals and music, which it gets right. In that respect, it is a stark contrast to Shanavas’s debut film Kari, a bare-to-the-bone independent work which was noted for its strong critique of casteism.

Sufiyum Sujatayum begins with the nomadic Sufi (Dev Mohan) returning to the Jinn mosque after years. A soulful ‘Azaan’ call later, he collapses and dies. A message informing the death reaches Rajeevan (Jayasurya), the husband of Sufi’s former loved Sujata (Aditi Rao Hydari), who decides to take his wife to see his face one last time, hoping that it would save their unhappy marriage.

Much of the first half of the film is then set in the flashback, of Sufi arriving in the village, somewhere in the Kerala-Karnataka border, meeting the deaf-mute Sujata during her visits to clarinet-playing saint at the mosque and them falling in love. But, this love remains under-explored, as is the character of Sufi. If the intention was to maintain the element of mystery on a mystic, it doesn’t cut it in a film, where we would be keen to know what made him what he is or what makes them fall for each other.

Inevitably, the film also addresses the fake propaganda of Love Jihad, which sees Hindu women as helpless victims being lured by evil Muslim men. Here, the initiative comes equally, or even more, on the part of Sujata. But the script sticks to just a mere mention of ‘love jihad’, staying safely away from the other complicated societal issues behind it. But at a time when symbols of Muslim-ness becomes targets of hate, the film celebrates them unapologetically.

Yet, the treatment of the film harks back to a past era, despite all the pleasing visuals conjured up by cinematographer Anu Moothedath. We are also left confused as to the timeline in which the story takes place.

The love and sufism in Sufiyum Sujatayum disappointingly remains skin-deep, which is a tragedy considering the promise it held.