Tail-end Diviseema gets water on time for kharif 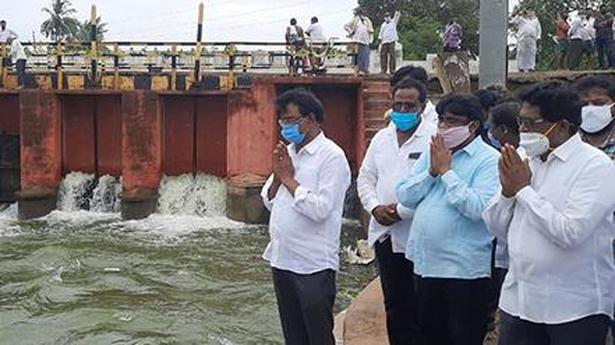 A staggering 800 tmcft of Krishna water has been released into the Bay of Bengal from the Prakasam Barrage in the last 80 days, according to Irrigation Department Executive Engineer A. Swaroop Kumar.

Addressing the media at the Col. Campbell Aqueduct at Diviseema in Krishna district, Mr. Swaroop Kumar said water was being released into the canals across the district to irrigate 7.8 lakh acres during the kharif season. “In the tail-end area of the barrage, all measures have been taken to facilitate the filling of drinking water ponds, apart from irrigating paddy fields in the Diviseema area,” he said.

Diviseema, comprising the three mandals of Koduru, Avanigadda, and Nagayalanka, is the tail-end area of the barrage.

Except the previous year, the Diviseema area has not been receiving irrigation water from the barrage on time for the kharif operations since 2013.