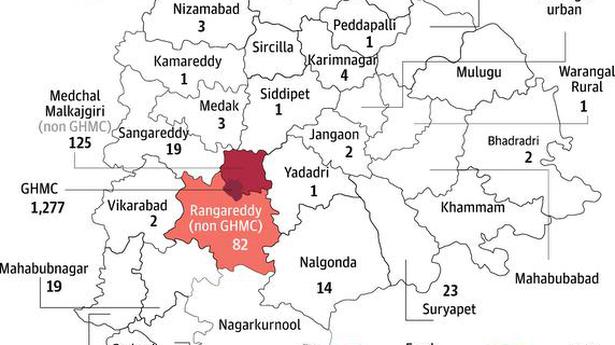 The total number of COVID-19 cases in Telangana reached 23,902 on Sunday as 1,590 more swab samples tested positive for coronavirus on Sunday. Seven patients succumbed to the disease.

According to data on age-wise distribution of the 23,902 cases, a little over 84% were recorded among people of age 13 to 60 years, 10.9% among people above 60 years, and the remaining 4.9% among children of 0 to 12 years. The data was mentioned in the daily medical bulletin issued by State Health department.

Senior officials from the State Health department have been urging youngsters to wear masks and maintain physical distance while speaking to elderly family members or those with compromised immunity, even at home.

When distribution of cases according to sex is considered, 15,559 affected are among males and 8,343 among females.

The Test Positivity Rate for coronavirus in Telangana continues to increase as 20.63% of positivity rate was reported till July 5. A total of 1,15,835 tests were conducted and 23,902 samples were positive for the virus.

When compared to other States in India, as per data in covidIndiaupdates.in, the Positivity Rate — percentage of samples which test positive — of 20.1% recorded in Telangana till July 4 was the highest in our country.

Till May 16, it was only around 6.07%. After the tests were ramped up, the positivity rate was 12.16% till June 16. From there on, it is on upward trajectory. As the State government and private labs are increasing testing capacity, more cases could be detected and the positivity rate might further increase.