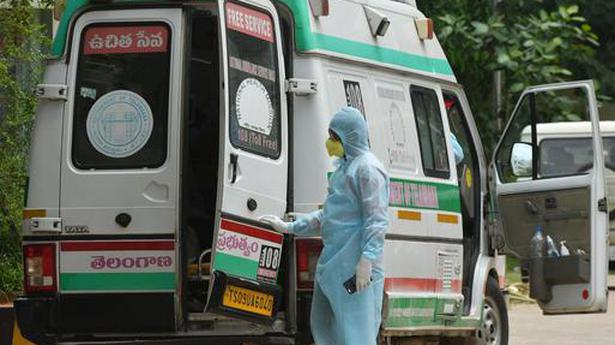 The highest number of COVID-19 cases in a day was reported on Thursday with 1,213 swab samples testing positive for coronavirus in the State. The second highest of 1,087 cases was detected on June 27. Eight more COVID patients succumbed on Thursday taking the toll to 275.

The 5,356 tests on Thursday is the highest number of tests in a day till date. The daily Test Positivity Rate (TPR) ranged from 17-37% in the past 17 days.

It was 22.6 % on Thursday. With 18,570 cases, Telangana stood eighth in terms of the number of cases across the country.

Sources in the hospital confirmed that there was delay in the process as the existing lab technicians were overburdened. “Two of the existing technicians tested positive. Efforts were on to draw staff from other labs. The process will resume from Friday morning,” the sources said.

As more suspects are referred from corporate hospitals to OGH, the number of samples are set to increase. Meanwhile, around 350 beds with oxygen ports facility will be added to District Hospital, King Koti.