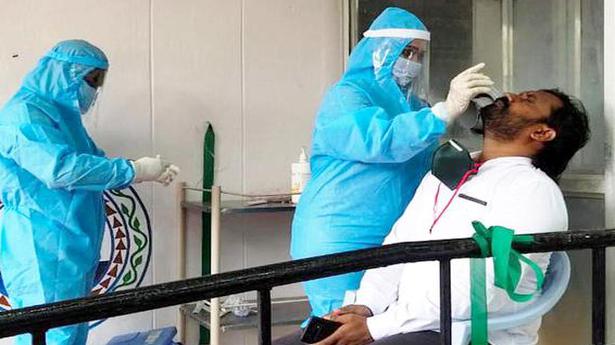 The State which has been on the forefront in detecting the coronavirus cases has tested 10 lakh samples by Sunday.

Having tested 10,17,140 samples by 9 a.m. on Sunday, the authorities put the positivity rate is 1.84%, which means only less than two persons in every 100 suspects tested have confirmed positive for the virus.

In a release, the Department of Health, Medical and Family Welfare on Sunday said that the COVID-19 testing began in the State on February 1 and the first sample was sent to Gandhi Hospital in Telangana.

The State, which set up its first testing facility at the SVIMS in Tirupati on March 7, has now 78 testing laboratories including four private ones and 15 government Viral Research and Diagnostic Laboratories (VRDL), 47 TrueNAT laboratories, five CBNAAT labs, two NACO labs, and five CLIA labs.

The testing count in the State crossed the 1-lakh mark in 59 days, and it took only 12 days to double the number. As the testing capacities have increased up to 34,525 per day, the last three lakh tests were done at a rate of one lakh tests per four days.

Meanwhile, the health department has recently ordered for the use of rapid antigen test kits for detecting the virus. The tests can be utilised at places such as hospitals. Once tested positive, the patients will be sent to the COVID designated hospitals.

Samples drawn from symptomatic patients that test negative will have to undergo RT-PCR test for the final result.