The Delhi-Agra Expressway has long been a lifeline for tourists and truckers, connecting the national capital with Uttar Pradesh, India’s most populous state. But in April, two weeks into the nationwide lockdown, the four-lane highway saw a dramatic change in purpose. It was now the rest stop for the walking poor. Migrant labourers heading to native villages with their families slept on its steel bus shelters, cooled their cracked feet in puddles of ditch water and plucked leaves off the odd banyan tree to hold against their sunburned eyes. Today, a month later, the scene has changed yet again and the highway is once more ruled by dust and vehicles. The Yogi Adityanath government’s decision to run 5,000 buses and 1,100 trains for the returning migrants has saved many workers a journey that at least 25 others lost their lives undertaking, even though this was a road mishap.

For Pramila Devi, 36, the journey from Panipat, where her husband worked as a car mechanic, to their village on the outskirts of Lucknow turned into a nightmare as he suffered from dehydration and leg cramps near Delhi. Luckily, they found their way to a UP government bus going towards their village. “My five-year-old daughter jumped with joy. The bus was burning hot, but after walking on the road for days, it felt like heaven,” says Pramila Devi. Like her, 34-year-old Aditya Prasad, a motor mechanic in a garment unit in Noida, too, took a bus. “I am relieved I didn’t have to walk,” he says. Prasad wanted to return to his home in Bahraich to support his family through the financially constrained times.

Despite a slow start, UP seems to have recovered lost ground in its management of the migrant returnees. Not only is transport being arranged, but the burden on institutional quarantine has reduced with the shift towards extensive home isolation in villages. Pooled testing is ramping up diagnosis of those returning and the state government is even making the right sympathetic noises about re-employing them in the state itself. A skill registry and a migrant commission do seem to lend credence to the promise, even though they do not take on board the cause-economics of migration. “We see migrants as the strength of our state,” says Sidharth Nath Singh, UP government spokesperson and minister for MSMEs, investment and exports. 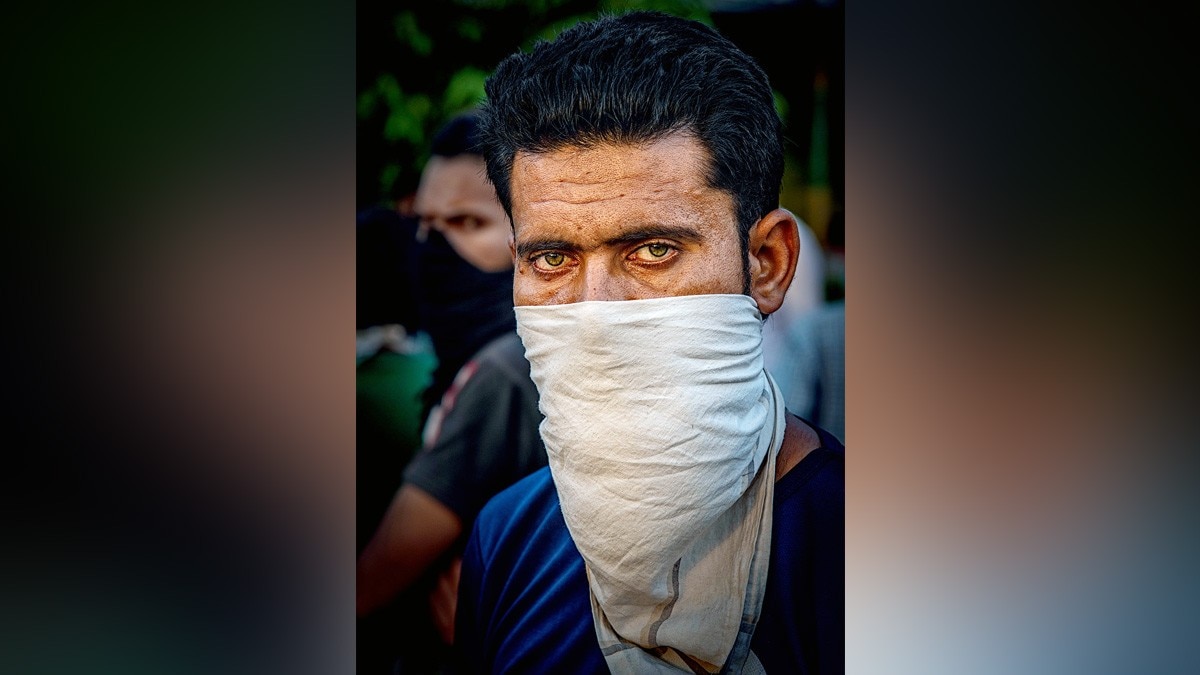 According to the state home department, more than 2.2 million workers have returned between March 28 and May 25, one of the largest reverse migrations in the country, if not the world. The state struggled initially to build facilities to keep returnees in a two-week institutional quarantine. At 10,246 cases and 170 deaths as of May 27, UP has managed to keep its Covid cases relatively low. The administration claims this was possible through a strict lockdown and border control. But returning migrants posed a big threat to UP’s estimated 230 million residents.

Two months is a remarkably short period to prepare for 2.2 million people, and reports of food running out in quarantine camps and shortage of masks and PPE (personal protective equipment) for workers were common. One particularly haunting image is of a group of men lunging desperately at bananas through steel bars at a quarantine camp in Agra. This crisis was mitigated through two new policies, one from the Centre that allowed pooled tests; the other from the state government, allowing non-Covid cases to be isolated at home (for a month) or in villages. Spreading people out across centres has helped. The camps in Muzaffarnagar and Deoband, for example, have no more than 25-30 people. “The initial days were difficult. We had to make adjustments practically overnight to deal with unimaginable numbers. But now we have support from villages. That more people are taking accountability has helped,” says Jasjit Kaur, district magistrate of Shamli.

For those re-entering UP now, the process is relatively straightforward. It is the responsibility of the relief commissioner’s office to supervise the process: registration and medical check-up of returnees, providing them ration kits and sending them to their homes in various districts once the quarantine period is over. More and more returnees are being tested, though a massive backlog remains. The state health department says 807,147 interstate migrants have been put under surveillance and 52,954 samples have been collected from them. Till May 25, 1,569 migrants had tested positive for COVID-19. The health department is regularly conducting pool tests of migrants to save on precious diagnostic resources and time. On May 25, 892 pools of five samples each and 202 pools of 10 samples each were tested. ICMR (Indian Council of Medical Research) guidelines, though, stipulate no more than five pooled samples per test.

For the home-quarantined returnees, surveillance is mandatory to check if they develop symptoms in the next 14 days. In the rural areas, village surveillance committees, headed by the gram pradhan and consisting of Accredited Social Health Activists (ASHA), anganwadi workers and volunteers, have been set up. In the urban areas, the ward councillor heads the committee, with ASHA, civil defence and resident welfare association representatives as members. “The health department has alerted the mohalla and village surveillance committees to keep a watch on migrant workers during home quarantine,” says Amit Mohan Prasad, principal secretary, health.

Those heading for home isolation are given ration kits (each contains five kilos of flour or rice, 5 kilos of potato, 2 kilos of cooking oil, a kilo of dal, soap and salt). On completing the quarantine, every migrant gets a sum of Rs 1,000. Help has also come in the way of ration cards. “Around 800,000 migrants got ration cards under the Tatkal scheme while those who have ration cards in other states are being covered under the ration portability scheme,” says Sidharth Nath Singh. Will there be another exodus?

But promises to resettle those who have returned will not be enough. The administration will have to look beyond short-term relief measures. Migration from UP is a well-established and growing trend. Census data shows about 9.3 million people migrated from the state in 2001, and this figure had gone up to about 12.3 million in 2011. “The rapid increase in the number of migrants from UP indicates that more effort is needed for the socio-economic uplift of the poor. Otherwise they will return to their villages or leave for greener pastures,” says Rajeshwar Yadav, associate professor of sociology at Lucknow University. If the state government fails to provide jobs to the returnees, they will most certainly leave once new opportunities open up in states that offer better-paying jobs.

The migrant commission is ostensibly a step in that direction. It may even have spin-off benefits when the assembly election comes round in 2022. Chief Minister Yogi Adityanath will be keenly aware of the perceptual dimensions of the government’s moves and has placed special emphasis on job creation and skill development of all those who have returned. “The migrant commission will work for the betterment of migrant labour,” says Swami Prasad Maurya, UP labour minister. “Any other state seeking UP’s manpower cannot take them away just like that. They need to do it with the consent of the UP government. Our government will now take charge of the insurance and social security of returning migrants.” The relief commissioner’s office is thus also preparing a skill registry of returnees when it screens and segregates them for quarantine. “The chief minister has directed that workers be accommodated in various sectors on the basis of this skill mapping,” says relief commissioner Sanjay Goyal. “We have identified 66 types of skill or semi-skill trades for the [employability] assessment of migrant labourers.” In the first list, 152,000 people have been registered for real estate; 1,527 for automobile repair; 12,103 for apparel and tailoring and 16,262 for carpentry. Another 9,006 people have been registered as drivers, 4,980 as electricians, 26,000 as painters and 3,364 as security guards. “If I get a job at home, I will prefer to stay back. Why would I want to be away from my family for 10 months in a year?” says Varanasi’s Bimal Gautam, 29, who worked as an electrician in Delhi. “But I need an income. Farming will not provide for my children’s education and marriage.” There are also efforts to provide work under MGNREGA (Mahatma Gandhi National Rural Employment Guarantee Act). “We immediately issued MGNREGA job cards to over 100,000 migrants,” says Manoj Kumar Singh, principal secretary, rural development. The target, he says, is to provide MGNREGA employment to 2 million people. This, if achieved, will cost the exchequer around Rs 40 crore a day in wages.

Numbers can be both friend and foe. A large population is hard to manage, but if UP can find gainful employment for its returning migrants, the post-Covid world could see a big change in the status quo. For now, it seems the migrants are relieved to be home.

Previous articleThe hardships of home
Next articleWanted: A return policy