Home ENTERTAINMENT The best of Saroj Khan: From ‘Ek Do Teen’ to ‘Dola Re...
ENTERTAINMENT

The best of Saroj Khan: From ‘Ek Do Teen’ to ‘Dola Re Dola’ and ‘Barso Re’ 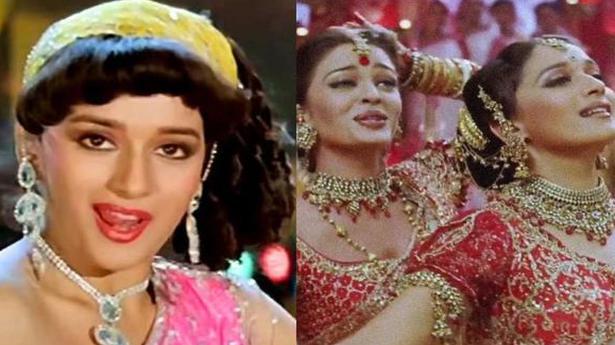 Saroj Khan, who died in Mumbai on Friday following a cardiac arrest at the age of 71, was one of Indian cinema’s most talented people. She was among the first dance choreographers in the country who got written widely about in the media. For, her work was not just that good, but was astonishingly popular too.

If Madhuri Dixit became an instant, national sweetheart, with her dance to the song Ek do teen.. (Tezaab), Saraoj was one of the reasons for that. Sridevi and Aishwarya Rai, the other two finest dancers among the Bollywood heroines of our time, also owe some of their most graceful steps to her.

The Hindu pays a tribute to Saroj Khan with a playlist of some iconic dance numbers that she choreographed:

Five minutes into Tezaab, this girl, dressed in sequinned purple crop top and multi-coloured skirt, would glide onto the ramp, fly kisses into the audience, say Namashkar and ask them Kya sunenge aap…? (What would you hear?) What followed, on screens across the country, was sheer magic.

Madhuri Dixit’s million-watt smile, eloquent expressions and stunningly graceful moves, as she danced to Laxmikant-Pyarelal’s composition in Alka Yagnik’s fresh voice, conquered the viewer in a way probably the picturisation of no other song did in Indian cinema before. Saroj’s steps brought out the innocence, elegance and oomph of Madhuri beautifully. Little wonder, Ek do teen… continues to delight, some four decades after we first watched, and after Jacqueline Fernandez’s version of it in Baaghi 2.

Taal remains one of A.R. Rahman’s finest albums. From the classical Taal se taal milaa... to the folksy Kariye naa… the mix was electrifying. The music helped Subhash Ghai greatly in making what is one of his best films. Aishwarya Rai’s stunning looks, and a splendid performance in her role as a dancer from a small hilly town, helped, too. As did those beautiful visuals from Himachal shot by Kabir Lal.

Then, there were some brilliant choreographies. Like this one, in which Aishwarya showed she could have succeeded as a classical dancer too if she wanted to.

The rain, Aishwarya in her white flowing skirt and blouse with flared sleeves, the breathtaking beauty of Himachal’s Chamba, Alka Yagnik’s vocals…it was all heady stuff. Saroj came up with steps that ensured visual immortality to the song.

Shekhar Kapur’s delightful superhero film had fabulous music by Laxmikant-Pyarelal. This one was sung rendered impeccably by Kishore Kumar – it would prove one of his last hits – and Kavita Krishnamurthy.

On screen, Sridevi, in a blue chiffon saree, sizzled, especially when it started to rain half way into the song. The sari-clad, rain-drenched heroine may have become a cliché in Indian cinema – irrespective of the language – but this one has attained iconic status, due in no small measures to the aesthetic choreography of Saroj and Sridevi’s sensuality.

In Lagaan, Ashutosh Gowariker showed how you could make a fine film that would score high not just on artistic merit but become a hug box office hit as well. Among the film’s many highlights was A.R. Rahman’s music.

This tilting melody about the romance of Radha and Krishna – penned by Javed Akhtar – was rendered beautifully by Udit Narayan and Asha Bhosle. The Dandiya steps Saroj chose were just perfect, and Gracy Singh and Aamir Khan did an excellent job of executing them.

Few contemporary Bollywood directors have as good an ear for music as Sanjay Leela Bhansali. His retelling of was India’s most loved love story, Devdas, was spectacular. Ismail Darbar gave him just the apt musical score.

This song was sung with great finesse by Kavita Krishnamurthy and a young Shreya Ghoshal. Dancing to it were two of India’s greatest divas: Madhuri Dixit and Aishwarya Rai. Dressed in white sarees and red blouses, and heavily bejewelled, they looked a vision and danced like a dream. That dance sequence, which brought the very best out of Saroj, remains a visual treat still. Saroj deservedly won the first of her three National Awards for Devdas.

One of the greatest love stories of Indian cinema had great music too. More than two decades later, when Hindi cinema is becoming increasingly unoriginal, we could appreciate Jatin-Lalit’s lovely melodies even more. Udit Narayan and Lata Mangeshkar sang this massively popular, ageless wedding song.

The undeniable chemistry between Kajol and Shah Rukh Khan lit up the screen, and Saroj showed her mastery yet again, using Bhangra steps.

The 1990 film may have been eminently forgettable, but this dance sequence is one of the most sensual ones you would ever get to see. Bhappi Lahiri’s composition was sung rather well by Anupama Deshpande.

Then, Madhuri Dixit and Saroj Khan took over. Dressed to kill as a Marathi fisherwoman, the actress must have even exceeded the choreographer’s expectations.

Mani Ratnam’s splendid Hindi film won Saroj her third National Award. Mani, as usual, had the genius of A.R. Rahman to lean on. The Mozart of Madras came up with another winner, as usual for the man who discovered him.

Aishwarya Rai danced away with gay abandon in this song rendered by Shreya Ghoshal. Rajeev Menon’s camera and Saroj’s choreography also helped it turn into a video you could watch several times over.