The spread of COVID-19 has perhaps been the single-most disruptive development in the history of mankind since World War II. The impact has been disastrous in many ways, particularly in the way people learn, work and socialise. From the world coming together to become a global village, people are now pulling away, both literally and otherwise.

The fear of proximity is what is forcing parents and boards to argue in the courts whether there should be a board examination-the make-or-break score for which is the ticket for a student to find admission in a reputed college. The disruption is evident. By this time, the 10+2 board results should have been out. Colleges should have released their cut-off lists. Instead, the academic calendar is in limbo. Colleges are now expected to reopen in September and the admission process will go online. In fact, the biggest and most sudden transition the pandemic has forced is the switch to online education.

The next academic session will also be critically about the digital infrastructure colleges have, their ability and efficiency to enforce physical distancing and how parents and students prioritise their goals-the safety of studying at home versus the privilege of enrolling in a star college in a big city. Three of India’s top hot-spots for higher education-Delhi, Mumbai and Chennai, which attract thousands of students from India’s small towns and villages-are also the epicentres of the COVID-19 pandemic.

Will things return to normal, come September? How safe will it be to stay in a hostel or paying guest accommodation in big cities? How good are colleges in India’s smaller cities? Will the competition become more cut-throat this year as the number of Indian students going abroad will see a big dip due to COVID-19? India sent 202,014 students last year to the US, which is the second largest number of students any country sends to the US, after China. 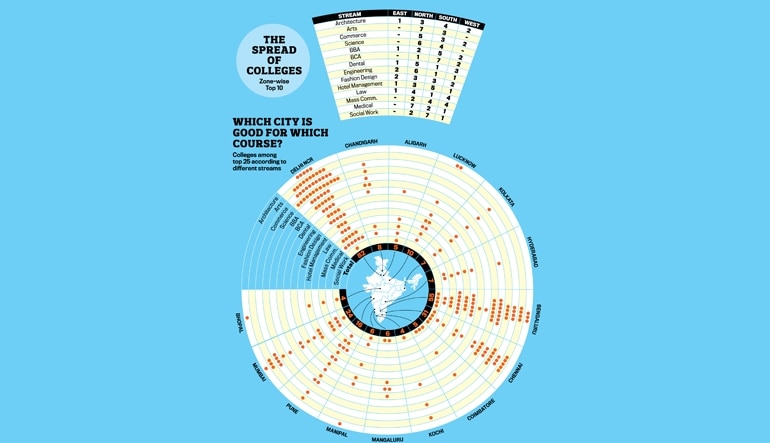 Parents and students across India are grappling with these questions as they try to cope with an unprecedented situation. For the past two decades, the India Today Group’s survey has been the most authentic reflection of the state and progress of India’s colleges. The 24th edition of the survey assumes even more significance in light of Covid. 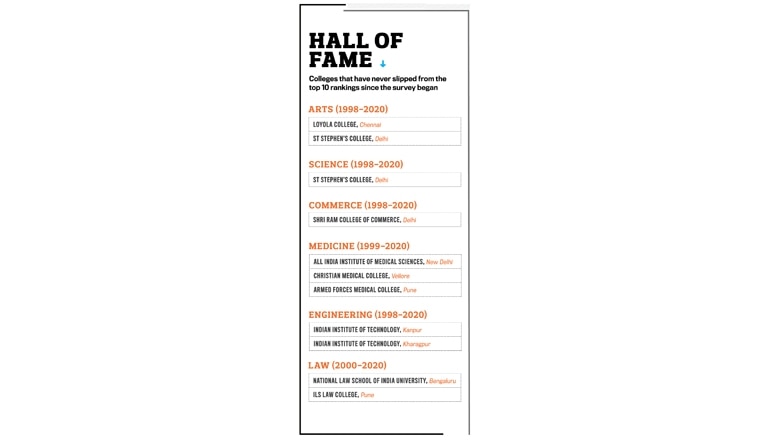 The findings of the survey this year-as in the past couple of years-once again underline the urgent need to democratise the quality of education in India. Most of the top colleges have remained concentrated in a few big cities, with the national capital region of Delhi leading the pack. That explains the incredibly high cut-offs in Delhi University colleges and the nerve-wracking competition among students to secure a seat in a college of their choice.

Though colleges from about 175 cities have participated in the rankings, the top 25 colleges in arts, science and commerce are restricted to only eight cities, the top 25 engineering and law colleges in six. The medical stream fares a little better, with the top 25 colleges spread across 11 cities. This geographical disparity is a strong argument in favour of expanding digital education, which can help top institutes take their courses and classes to remote areas. But to convert that ambition into reality, India first needs to eliminate the digital divide. According to a 2018 World Bank report, Indians were more constrained by the circumstances they were born in than the citizens of five other large developing countries-Brazil, China, Egypt, Indonesia and Nigeria. The digital divide may exacerbate those constraints.

The government is banking heavily on the Bharat Net project, which aims to provide broadband through optic fibre to 250,000 gram panchayats to improve connectivity. Initiated by the UPA government in 2011, the project has missed several deadlines and is now expected to meet its target by August 2021. Till February 2020, cables had been laid in 146,717 (59 per cent) gram panchayats, of which 134,248, or 53 per cent, are service-ready. Even if deadlines are met, it will be a job half done. Effective and viable digital education will need multiple infrastructure, social and academic support, and a definitive overhaul of the education system. The launch of the New Education Policy, possibly in the monsoon session of Parliament, will be a step toward it.

The spread of virtual education by government institutes may also bridge another disparity-in the quality of education in government and private institutes, particularly in engineering and medical. That is why government colleges-though many of them fare poorly in terms of infrastructure-account for 67 per cent of total enrolment, despite the fact that 78 per cent of India’s nearly 40,000 colleges are privately managed. Measure the quality against cost-effectiveness, and the gap widens. To measure the value for money of every institute, the India Today Best Colleges Survey devised the return on investment (RoI) measure in 2018. RoI is calculated by dividing the average annual placement salary with total course fee. There is massive disparity in RoI between private and government colleges-the government engineering college with the best RoI scored 7.8 while the private college with the highest RoI fared 3.8. Similarly, the average course fee of top 10 government medical colleges stands at Rs 87,196 compared to the Rs 35,29,658 average fee-40 times more-of the top 10 private medical colleges. Yet, there are only three private medical colleges among the top 20, and only one among the top 10. And all three are at least half a century old, indicating the dominance of institutes with a long legacy.

This trend is evident across stre­ams. In all 14 of them, all colleges that were set up in or after 2000 were evaluated separately. None of these colleges, some in existence for two decades, could manage a place among the top 20 in any stream. This is an area in which our survey expects intense competition. The journey of a small-town college to the top is not just an academic achievement, it holds the potential to kickstart an education revolution in India. Such a revolution will be the foundation of a self-sustainable economy, the one Prime Minister Narendra Modi hopes will be India’s answer to the pandemic.

Get real-time alerts and all the news on your phone with the all-new India Today app. Download from
Previous articleRevised ATP calendar not safe for players, says Murray
Next articleInto the Night: A lockdown gift from Netflix