The Long Road to Self-Reliance | Automobiles 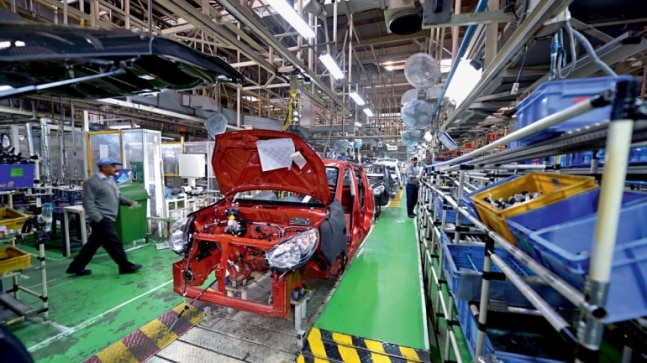 Long before geopolitical tensions led to calls to ban Chinese goods, Indian automotive component makers had already decided to reduce their dependence on Chinese suppliers. Called ‘China Plus One’, their strategy aims at creating alternative supply lines — from Japan, Korea, Taiwan, Thailand and Germany, among other — for a range of auto parts imported by India. This had followed disruptions in component supplies from China in January and February, as Covid-19 devastated Wuhan, a major auto hub in that country and the global epicentre of the disease.

Covid-19 has imperiled the movement of some $4.5 billion (Rs 33,750 crore) worth of auto components that India annually imports from China, comprising about 26 per cent of India’s $17 billion (Rs 1.28 lakh crore) worth of auto parts imports from around the globe. Even so, the Indian market is only a small part of China’s exports in this sector. China exports $70 billion worth of auto parts globally, as per a May 2019 Bloomberg report. Exports to India, at $4.5 billion, are just 6 per cent of that total.

However, leading suppliers to the auto industry note that replacing Chinese firms in the component supply chain is easier said than done. “In Covid-19 times, we have seen how easy it is to switch off a supply chain,” says Deepak Jain, president of the Automotive Components Manufacturers Association, which represents 830 auto parts makers in India, and chairman of Pune-based Lumax Industries, a major supplier of lighting systems to automotive companies. “But to get it started again (with a new supplier) is not easy,” he says. “It is a long process.” For instance, China is the world leader in the manufacture of LED (light-emitting diode) systems, popular for their brightness and capacity to save electricity. Though LED systems are assembled in India as well, the components themselves are imported from China. It is in the manufacturing of such basic and crucial electronic components that China has stolen a march over several other countries, including India.

To add to the Indian automotive sector’s problems, before the Covid crisis arrived, Indian regulators had already announced a fast transition from Bharat Stage IV (BS-IV) to BS-VI pollution norms, skipping a stage in between. This had caught several component makers off-guard. “Several systems could not be localised since we were not given time to expand,” explains Jain. “Therefore, imports increased.” This had led to increased reliance on China at a time supply lines were about to go into seizure.

For several years now, Chinese imports have dominated the Indian automotive components space. These products are scattered across the entire value chain, from electronics and electrical parts to fuel injection, braking and lighting systems and steering components. Apart from importing one-fourth of our auto requirement from China, India imports 14 per cent from Germany, 10 per cent from South Korea and 9 per cent from Japan.

Anecdotal reports fill out the story. Truck-maker Ashok Leyland says it has exposure to Chinese supply chains for BS-IV and BS-VI products such as fuel injection pumps. R.C. Bhargava, chairman of Maruti Suzuki, the country’s largest carmaker, tells india today that it has an “indirect” supply of components from China through its Tier 1 and Tier 2 suppliers. “One of Maruti’s key policies in the past 10 years has been [to localise] parts for vendors,” says Bhargava, adding that India has been losing a billion dollars a year on imports as the rupee loses value. “We have made substan­tial progress in localisation, but of the imports by vendors, the biggest chunk is electronics.” Another industry major, Bajaj Auto, imports Rs 600 crore worth of components directly from China every year, comprising 3-4 per cent of its overall material costs. Another Rs 400 crore worth of goods are imported by the company’s Tier 1 suppliers, according to MD Rajiv Bajaj. The largest import is that of alloy wheels for motorcycles, followed by transmission products. Bajaj says the imports, in part, are because of the “unease of doing business” in India. “We are handicapped by the 5 ‘Ls’ — issues of land, labour, logistics, legislation and electricity. Chinese sources are more competitive.” Bajaj Auto exports Rs 15,000 crore worth of motorcycles every year. “The imports help to make us competitive-there is a lot of merit in importing from China.” 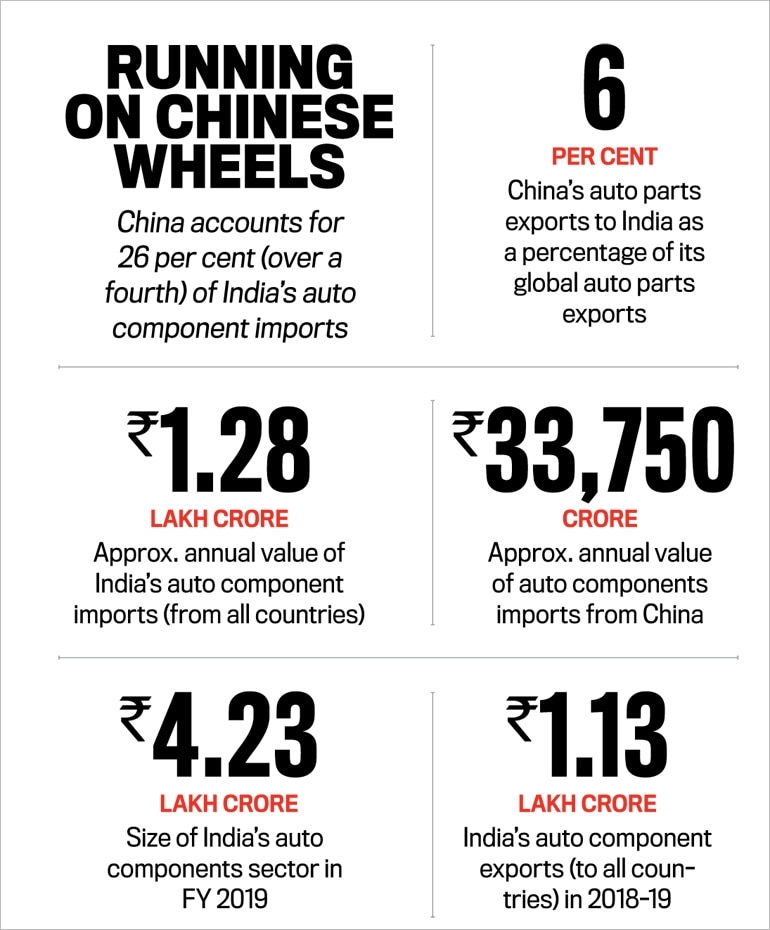 In the automotive components sectors, it is China’s electronics manufacturing might that India will find difficult to replace. India imported $20 billion worth of such goods from China in 2019, with the biggest import being high-end electronics. “This is massive, both in [terms of] the size of the industry and the velocity at which it is growing, at 20-22 per cent,” says V.G. Ramakrishnan, MD at Avanteum Advisors. “The demand for products in the electronics segment is around $400 billion.” A supply of this scale will be difficult to recreate in India. Electronics now comprise around 10 per cent of a modern vehicle, with Ramakrishnan estimating that this is likely to go up by 20-25 per cent in the next five to seven years.

When it comes to electric vehicles (EVs) — a sector India is now trying to prioritise — the country’s dependence on China is significant. Around half the cost of an EV is its batteries, and China is home to two of the largest battery manufacturers in the world. It is also a major producer of motor controllers for EVs. Reports suggest that the Chinese market for electric motors and motor controllers alone was nearing $4 billion in 2020, before the lockdown was announced.

Jain says that Indian auto companies buy from Chinese manufacturers because of their cost competitiveness and scale. Indian automotive suppliers supply very high-quality products, but only on the mechanical side of things. Domestic manufacturing lags in electronic products. “Low volume manufacturers such as Skoda tend to import more from China,” says Ramakrishnan. For auto-makers, localising component manufacturing for a low volume of sales can be a problem.

One misnomer is that all goods coming into India from China are ‘Chinese goods’. Many European companies produce their goods in China and then import them into India. For those looking to push ‘make in India’, the question is whether global players can achieve the same scale of production in India as they can in China. Another hurdle is that some major component manufacturers have set up huge units in nearby countries like Thailand and Taiwan, making a shift of operations to India unlikely. Gaurav Vangaal, associate director-forecasting at IHS Markit, a research firm, also points out that China is itself a large market for automobiles, producing 24 million units a year, compared to India’s 4 million units. This makes it attractive for global suppliers to set up base in China.

So, what should India’s strategy in this sector be?

Bajaj says the government should focus on making the domestic automotive components industry more competitive. “We do not have to stand tall by trampling on China,” he says. “A lot of our suppliers are more competitive today because of their exposure to Chinese firms.” Sector experts argue that India’s measures should be calibrated, so that the industry does not find supplies choked and prices rising. Jain says what is needed is a fundamentally stable policy. High logistics, land, power and capital costs negate India’s advantage on the labour front. Firms from the domestic electronics, semiconductors and components manufacturing sectors need to work together to manufacture the products needed in India. The government should also encourage more public-private partnerships and continue its push to attract global investment.

Bhargava highlights the fundamental issue at the heart of why India is importing so heavily from China. “Either we don’t have the technology to make [those products] here, or the cost [of production] is so high that it’s cheaper to import,” he points out. Essentially, even if India could entirely shut Chinese firms out of its supply chains, it would still be importing massively from elsewhere — from Japan, Taiwan, Korea or Thailand.

Experts point out that China did not earn its position as a global manufacturing hub by banning foreign products. China imported American and European products and learned to make them better and cheaper, says Maxson Lewis, MD, Magenta Power, a provider of EV charging stations. A blanket ban on Chinese imports serves no one and would be a slow death for the Indian manufacturing ecosystem. In the case of EVs, it would be like killing the baby before it is born, he adds.

One reason for India’s lack of competitiveness is that the cost of manufacturing here is higher than it should be. Bhargava laments that policy-makers have not really understood the importance of competitiveness. One example is the time to get approvals to start a business. Approvals that may take a year in an Indian state could take just 10 days in China. In India, manufacturers also have to deal with central and state monopolies, which can add major expenses. These mean a higher production cost and a lower demand for goods made in India.

There is a clear reason why Indian companies are importing in such quantities from China. Scale, pricing and the range of products available gives Chinese manufacturing the edge. Cutting out Chinese imports without identifying alternatives will amount to India shooting herself in the foot. What would be better is a well laid-out strategy to shake off India’s dependence on Chinese imports over time. This requires a continuing association, both to pick up a few needed lessons on competitiveness and also to maintain essential supplies while domestic production is developed.