With the country in the grip of the coronavirus and a lockdown extended thrice, even the gods are feeling a little deprived. In Tirumala, easily India’s most popular religious shrine, with some 80,000 pilgrims visiting it daily before the lockdown, the deity, Lord Venkateshwara, stopped giving darsh­an from March 21 as Covid fears rose. But denying access to the devout comes at a very high price. The Tiru­mala Tirupati Devasthanams (TTD), managers of India’s richest Hindu temple, lose nearly Rs 7 crore a day from the hundi collection, acco­mmodation and sale of tickets, not to mention the delectable prasad of the Tirumala laddoos. If the Covid-related restrictions continue through June, the TTD could stand to lose close to Rs 600 crore. 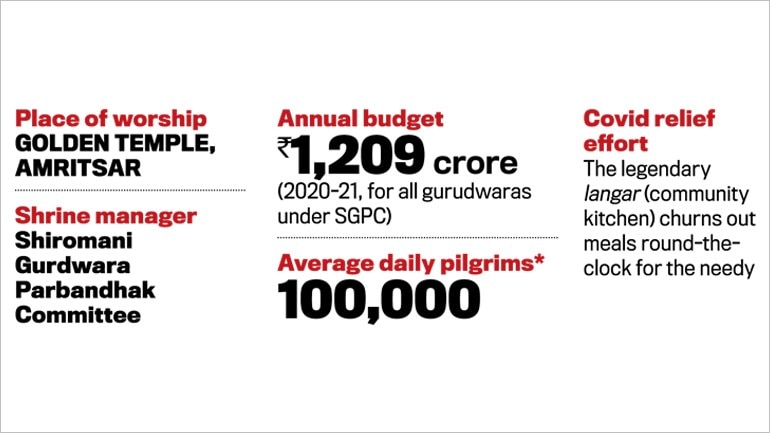 The TTD, though, can dip into its reserves without much of a dent to its Rs 3,030 crore budget for 2020-21. Other less resourceful shrines may not be as fortunate, and with the summer months of peak pilgrim inflow passing by, there is cause for worry. Telangana rose to the challenge by starting online puja facilities at 19 temples from April 17 onward. Devotees can access the Telangana MeeSeva portal or a mobile app of T App Folio to book a puja or seva of choice. A confirmation message is then sent. Some temple authorities are also uploading video clips of the puja rituals on YouTube. As of now, they do not have many takers, but temple managements believe this is the way of the future.

In Karnataka, the Muzrai depart­m­ent in charge of religious and cha­r­­i­table endowments is set to introduce live telecast of pujas of select temples by early June. “Fifteen kinds of pujas can be booked online and the prasad will be delivered home,” Muzrai minister Kota Srinivas Poojari ann­ounced as he said temples in Karnataka could open by June 1. In fact, chief minister B.S. Yeddyurappa has written to Prime Minister Narendra Modi, requesting that all religious places in the state be allowed to open on the date. The state government has also released Rs 33.7 crore to pay the salaries of priests of 29,700 temples for three months.

The TTD is also working on post-Covid devotee management to avoid huge gatherings anywhere in Tirumala or in Tirupati. “Curre­ntly, about 76 per cent pilgrims get darshan as per the pre-fixed time slots allotted to them when they book online or at the various TTD centres in Tirupati. In the post-Covid scenario, the time slot tokens will be made mandatory to avoid queues in the complexes,” says TTD chairman S.V. Subba Reddy. All Covid-related precautions will be enforced, while the Pushka­rini, the temple tank, will be off-lim­its for some months. 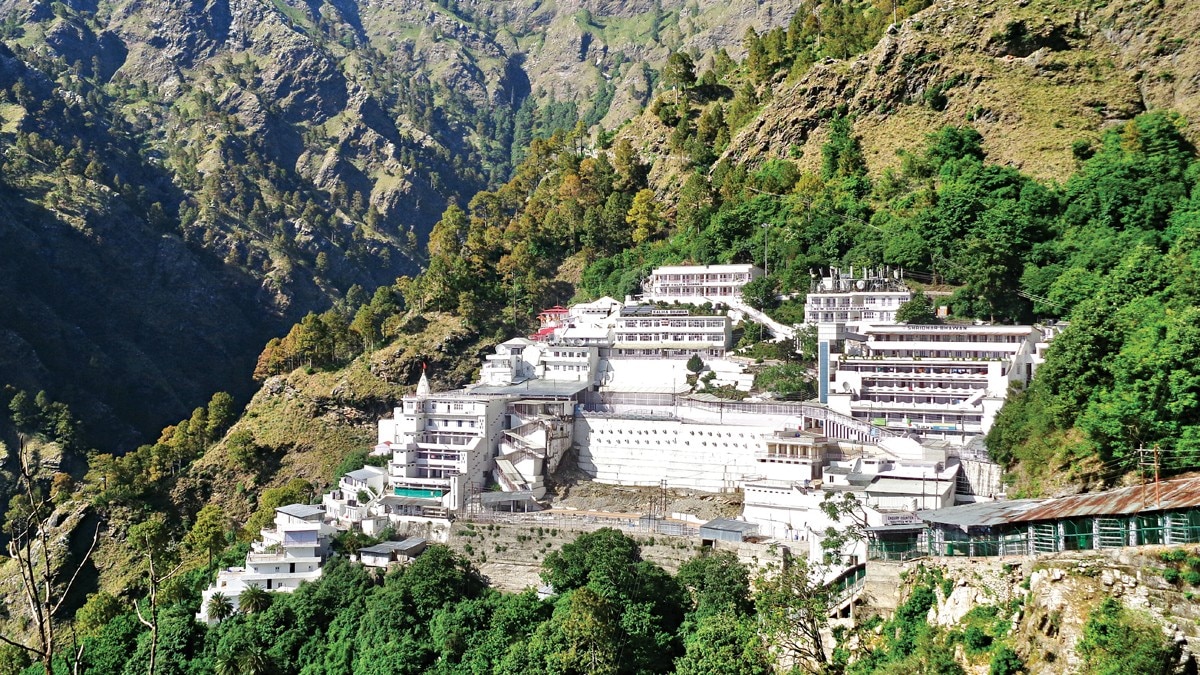 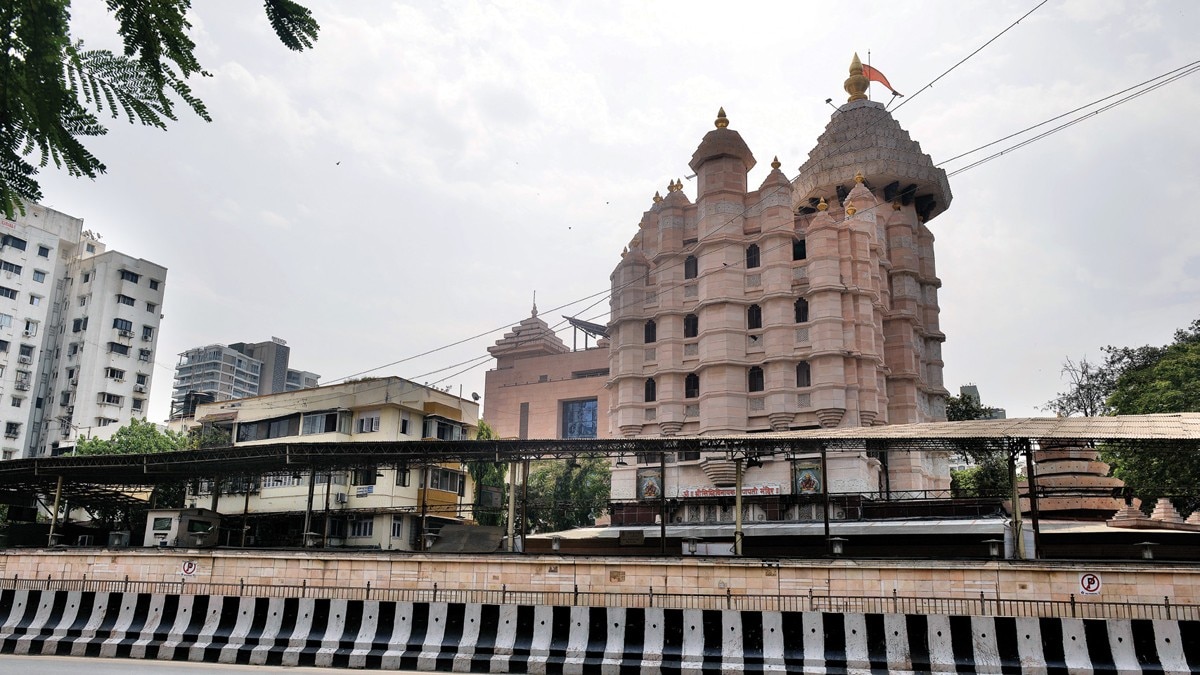 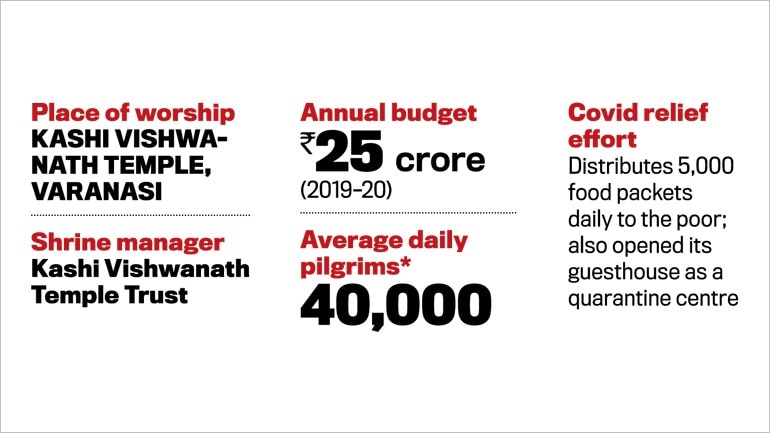 To bring cheer to the faithful, the Tirumala laddoo will be sold in all major towns of Andhra Pradesh and in Chennai and Bengaluru. And at half the price (Rs 25 a piece instead of Rs 50). “We can’t resume darshan right now, so we thought why not at least make the laddoo prasadam available as the lord’s blessings. The lockdown has also hit the incomes of the people, so we decided to cut the price of the laddoos,” says Subba Reddy.

Over the years, the TTD had toyed with the idea of sending devotees uphill in phases to avoid crowding in the waiting halls of the Vaikuntam complex at Tirumala. But objections from devotees who wanted to stay on in the temple precincts for longer periods had forced the temple managers to defer the decision. With the post-Covid restrictions now, it will no longer be a matter of choice.

Other temples too are exploring options to avoid large gatherings. At Mumbai’s 220-year-old Shree Sidd­hi­vinayak temple, which closed on March 16, gatherings like on Angaraki Sankashti Chaturthi, which falls once in three months on a Tuesday and when the number of devotees would sometimes go up to 500,000, may well be a thing of the past. “Everyone has learnt to take precautions…we will also have restrictions when we reopen,” says temple trust chairman Adesh Bandekar. He says online donations continue to flow in and fondly recalls how in January a Delhi devotee had given Rs 14 crore to decorate the sanctum sanctorum with 35 kilos of gold.

Meanwhile, in Shirdi, again in Maharashtra, the chants of ‘Sai, Sai’ have been muted, but the Sri Sai Baba Sansthan Trust, a government body which manages the 99-year-old temple, continues with online darshan for devotees. On April 2, hundreds of them gathered at the temple gates defying lockdown rules (the temple had closed on March 17) and the temple trust had to take stringent measures to keep the devotees at bay. “We are yet to decide on future steps to avoid crowding,” says Dr Suresh Haware, the outgoing chairman of the trust.

Things are as bad at Patna’s 120-year-old Mahavir temple, whose presiding deity, Lord Hanuman, is said to have the power to rescue believers from all sorts of woes. It has lost about Rs 3.5 crore in donations since it closed its doors on March 25. Acharya Kishore Kunal, secretary of the Mahavir Mandir Trust, says the temple will introduce an alphabetical time slot system to minimise crowding when it reopens. 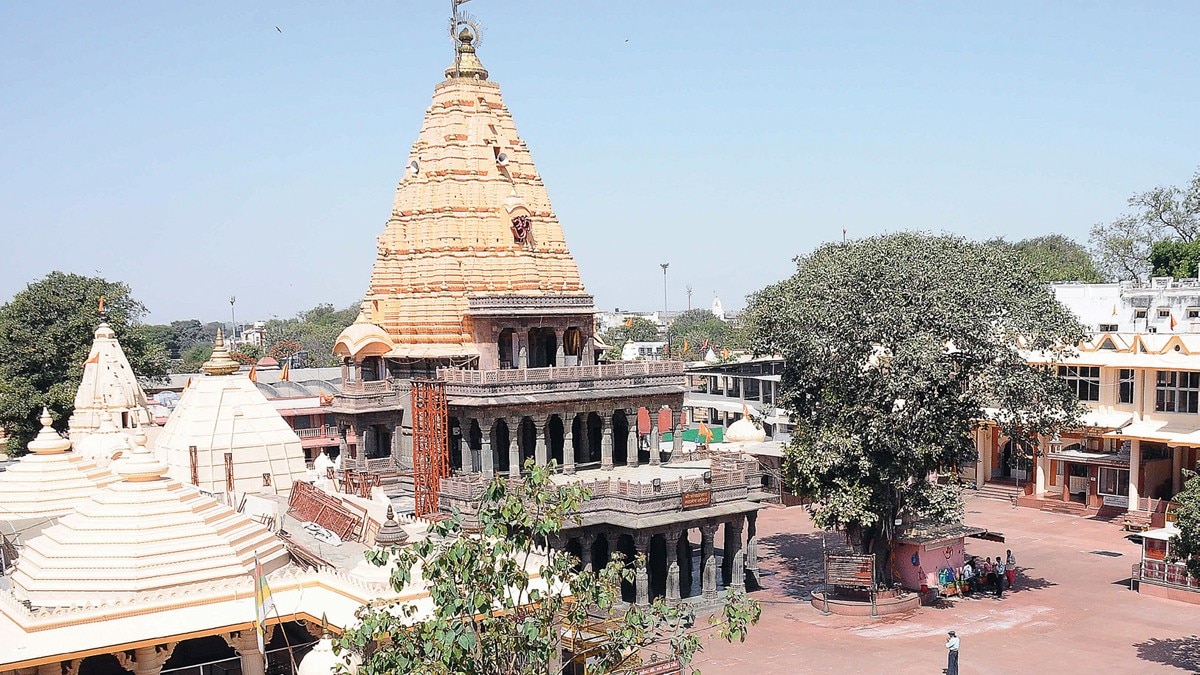 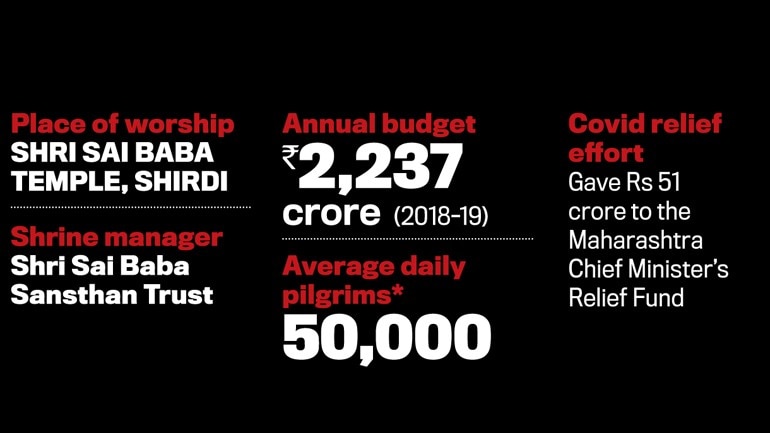 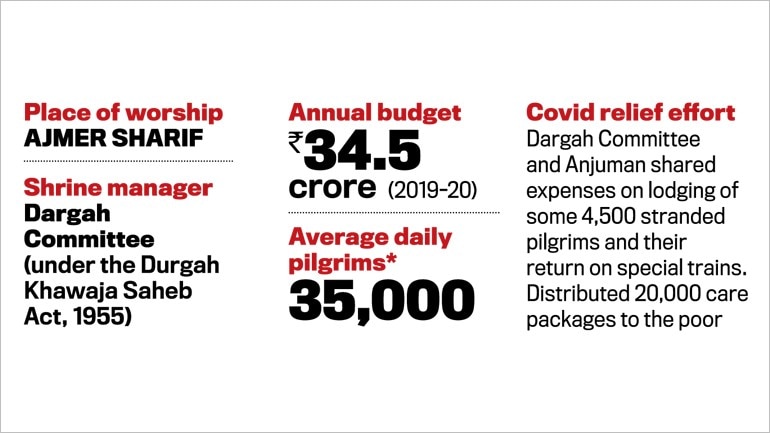 And it’s not just the devotees, economies of the temple towns are also in disarray. At the Shri Vaishno Devi temple in the Trikuta hills in Jammu and Kashmir, the morning and even­ing aarti is beamed live on television and the internet for devotees, but the place itself is struggling. “With the lockdown on, we are feeding nearly 700 people every day who have lost their livelihoods,” says Ramesh Kumar, CEO of the Shri Mata Vaishno Devi Shrine Board.

In Odisha’s Puri district, over 2,500 vegetable growers who supply to the Sri Jagannath Temple are in extreme distress after the temple restricted the rosha ghara that used to feed about 50,000 pilgrims on a normal day. The making of abhada (cooked offering) and baraati bhog (food cooked on devotees’ orders) has been at a minimum since March 21 when the temple closed. The farmers also used to supply the vegetables for the mahaprasad, a grand platter of 56 dishes (chhappan bhog) offered to the holy trinity at the temple. The 700-odd members of the Suar Mahasuar Nijog, who cook the dishes, are now without work.

Yet, religious shrines have not shir­ked their duty, fulfilling it as they always have in times of a national crisis. The Sri Sai Baba Sansthan Trust, which also runs a hospital for emergency services, has donated Rs 51 crore to the Maharashtra government for the COVID-19 battle. The TTD gave Rs 19.19 crore to the Chittoor district administration to equip Covid hospitals with physical and medical infrastructure, including ventilators, air-conditioned wards and portable X-ray machines. The TTD is also utilising its extensive kitchen faci­lities to prepare food packets for over 120,000 poor people everyday. (But it did renege on its offer of Rs 1 crore each to the 13 districts of Andhra Pra­desh to help with the migrants crisis.)

Ujjain’s Mahakal temple (famously popular with politicians facing elections) has taken up the responsibility of maintaining cleanliness at the local R.D. Gardi Medical College, the city’s main COVID-19 hospital. Likewise, the Vaishno Devi Shrine Board has converted their complexes at the base camp in Katra, Jammu, into a 700-bed quarantine centre and a 2,000-bed isolation centre where free food is also provided.

At the Golden Temple in Amritsar, the legendary langar (community food service) goes on round-the-clock to serve the poor and needy of the town. “During the lockdown, the expenses have gone up,” says Roop Singh, chief secretary of the Shiromani Gurdwara Parbandhak Committee (SGPC), which oversees the management of the shrine. He fears the economic impact of the lockdown will reflect on offerings at the Golden Temple as well. With the easing of the lockdown in Punjab from May 17, the Golden Temple has been seeing a few more devotees (the temple never closed completely). They are mostly from in and around Amritsar for now. The SGPC has been careful, social distancing and sanitisation measures are a must before the faithful are allowed entry into the temple complex.

At the 13th century Ajmer Sharif dargah of Sufi saint Khwaja Moinuddin Chishti, the annual urs will no longer be able to support the milling crowds. The dargah authorities funded the return of thousands of pilgrims and workers stranded there since March 25. The committee says their concern now is the survival of the khadims and shopkeepers in the shrine’s vicinity. The dargah authorities have advised devotees to spend the offerings they had intended for the Khwaja on the needy in their neighbourhood. Even the zakat offerings made during the month of Ramzan have gone through a Covid-triggered transformation, with donors spending more for healthcare and educating the public rather than just financial help to the poor. Several clerics urged their community to spend money on helping the needy rather than on new clothes for Id-ul-Fitr last week.

Meanwhile, it looks like the spread and intensity of COVID-19 will decide the course of the religious calendar for the rest of the year, especially big events like the Amarnath yatra and the Maha Kumbh mela in Haridwar in January 2021, which usually draws thousands from the world over. What is certain is that praying in public and at places of worship will never be the same again.

Previous articleLimping back to life
Next articleThe migrant mess