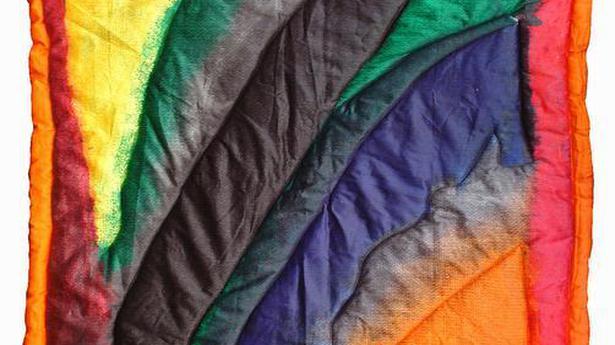 Last August, Jayshree Poddar, the design director at textile firm Atmosphere, visited Aim for Seva Chatralayam for Girls in Bengaluru armed with square pieces of kora fabric and paints. Invited to conduct a painting workshop as part of the non-profit’s three-year-old Art For Development project, little did Poddar know that this would be the beginning of a larger initiative. Now, patterns of splattered paint and fingerprints from the session are being digitised to create infant (36×48) and toddler (46×60) quilts (₹2,900 and ₹3,900 respectively) and sold by Aim for Seva via WhatsApp.

“The idea was to let the children [between ages nine and 16 years] express themselves. In the first half, I let them paint as they pleased, not adhering to any form. Some dabbed and smeared paint while others created straight lines and smudged patterns,” says Poddar, adding that in the second half they painted with just the three primary colours. Describing it as an “unusual interaction”, the NID alumnus explains how the girls were watchful in the beginning. “I don’t speak Kannada, so it was all based on actions, and sitting on the ground with them helped. Before we started the workshop, we also had a small session on body movements to help them open up physically,” says the Bengaluru-based designer, whose 2018 solo exhibition, Many Moons, explored the phases of the moon on woven jacquard.

(left) Jayshree Poddar and (right) a snapshot from the 2019 workshop

By day’s end, Poddar had approximately 100 painted squares. Later, when Aruna Madnani, the lead at Aim for Seva, suggested crafting quilts with the artwork, Poddar began experimenting with leftover fabric from one of her mills that specialises in bed linen. “We selected nine designs to digitise. We printed the abstract renderings on fine cotton, added a border, made the colours brighter, added the artist’s signature, and quilted them with a 200 gsm poly filling,” says Poddar, who also helms textile company Himatsingka Seide. She also added a removable mulmul cover. “It not only softens dark hues, but makes cleaning easier. You just have to wash the cover and the quilt is protected,” she says. Trials were also done with pastel shades of pink, blue and green, and each design now has two options: dark and light. The fabric is colour-fast, machine washable and comes with a tiny matching bag.

This experiment is the latest in a long list for Aim for Seva. Each year, they rope in different artists to work with the children. From digitised coasters, mats and mugs to hand-painted diyas and picture frames, the kids are encouraged to experiment with different techniques. “While we wanted to have a physical sale for the quilts, to help them learn about the retail aspect, we have taken to online sales given the present scenario,” says Madnani, adding that while trials were paused prior to lockdown as they ran out of ink (which comes from China), work restarted in June. “We have received enquiries for junior sizes and we are considering designing larger (54×72) quilts as well. Proceeds from the initiative will be used to buy things for the hostel,” she says.

As for Poddar’s plans on continuing the project (a first for her), it is a resounding yes. “This initiative took me back to my childhood — of having someone getting you to feel colour and clay. It is like planting a seed in a young mind. These will remain as memories and the children will want to take the learnings forward and continue creating something new. This is the same emotion I’ve had for the last 30 years: to unlearn, to be free and uninhibited. We have managed to do that with this project.”

Previous articleHighlights: 80 Crore People To Get Free Food Grains Till November-End, Says PM
Next articleKushal Tandon: Don’t want to do shows that go on endlessly