These online improv formats have clicked with Bengaluru audiences 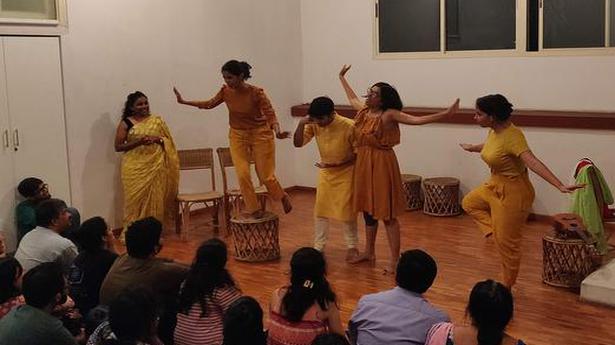 Balasree Viswanathan and Arjun Mehra, co-artistic director and artistic director, respectively, of Improv Comedy Bangalore (ICB was established in June 2015) found a format that worked well with audiences on Zoom webinars. They have held 12 shows so far and raised ₹72,000 for various NGOs, such as Give India, Jan Vikas, and CRY-Child Rights and You.

“We used a format called ‘Blind Power Point Presentation (PPT)’,” explains Balasree. “Each improviser is shown a power point presentation of five random slides, the topics can be anything — a TED talk, a wedding toast or explaining a conspiracy theory. Once the topic is chosen, the performer has to start talking and whatever is said must be linked to the topic. The show is of one hour duration with five speakers who are given eight minutes to speak. Audiences and judges participate. We promote one audience as a performer, who presents three slides for five minutes.”

Balasree says she got the idea for ‘Blind PPT’ after she watched it in an international performance. To ensure safety, Balasree says: “We have a password and limit the entry of the number of people.”

Improv performer and writer Laxmi Priya, who has performed for both ICB and Citylamps (an playback theatre group founded in 2019), says: “We don’t have to stop laughing to be serious. We need humour even more in this time, but not at the cost of the pandemic. We have performed ‘Blind PPT’ and improv games.”

Citylamps had conducted an improv show for elders, who are part of Silver Talkies, an organisation which arranges community activities for seniors. “We taught them how to download Zoom. We played back their stories. Their responses were heartening,” says Laxmi.

Balasree adds that they have now gained confidence to take their performances forward online. On May 16 at 8 pm, The Adamant Eves, an all-women Improv team, hosted by ICB, will be doing a long improv show in an Armando format. Hayley Kellet, guest improviser, will join from Canada. Explaining the Armando format, Balasree says: “The performers take a word of inspiration from the audience and then share personal true stories. We then improvise scenes with characters, emotions, places etc.” Balasree says they have planned one more ‘Blind PPT’ show next week.

Previous article‘FM measures for agriculture will open new chapter’
Next article‘Loser’ review: Priyadarshi, Annie and Kalpika walk away with the honours