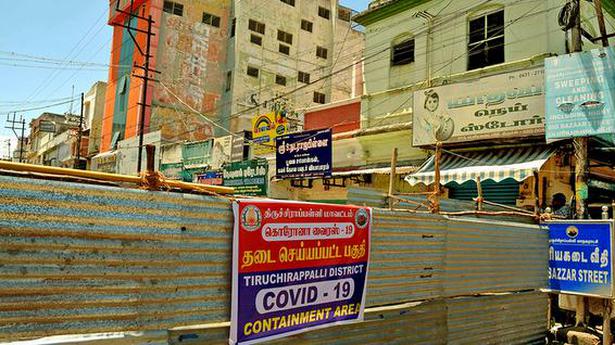 The central region recorded three co-morbidity deaths — two in Tiruchi and one in Thanjavur — and witnessed an addition of 211 COVID-19 positive cases on Sunday.

A 60-year-old woman of Srirangam zone in Tiruchi city who was admitted to the Tiruchi Mahatma Gandhi Memorial Hospital on July 10 died early on Sunday morning of COVID-19 related complications. She was a known case of diabetes and suffered from pneumonia.

A 68-year-old man from Anna Nagar who was admitted to the Tiruchi MGMGH on July 4 also died on Sunday. He suffered from diabetes and hypertension and died of respiratory failure, official sources here said.

In Thanjavur, a 64-year-old woman diagnosed with diabetes, hypertension and chronic kidney disease died of comorbid conditions which worsened her health when she was diagnosed with COVID-19 on July 10. She underwent treatment until July 12 but doctors were unable to resuscitate her, sources said.

Among the 211 cases, Tiruchi accounted for a large share with 103 cases. There were 45 new cases in Pudukottai, 36 in Thanjavur, 11 in Tiruvarur, six in Nagapattinam, five in Karur, four in Ariyalur and one in Perambalur district.

Many patients who tested positive in Tiruchi hailed from Musiri, Manapparai, Thuraiyur, and from many localities within the city limits including Thillai Nagar, Woraiyur, E.B. Road, and Palakkarai, official sources here said. The total number of COVID-19 cases in the district is now 1,504.

Meanwhile, as many as 12 patients were discharged from the Tiruchi Mahatma Gandhi Memorial Government Hospital on Sunday. Of them, 10 hailed from Tiruchi, while two were from Karur and Kallakurichi districts.

A total of 70 patients were also discharged from the COVID Care in Khajamalai. Of them, 58 hailed from Tiruchi, three from Ramanathapuram, two from Tenkasi, and one each from Pudukottai, Karur, Karaikudi, Nagapattinam, Thiruvallur, Thoothukudi, and Kanyakumari.

The patients were sent home in ‘108’ ambulances and asked to stay in home quarantine for a period of 14 days before venturing outdoors.

In Pudukottai, the 45 COVID 19 patients were admitted to the Ranee’s Government Hospital for treatment.

Of the six COVID 19 positive cases in Nagapattinam district, a 30-year-old man serving in the army in Assam was infected on return to his hometown. He is currently undergoing treatment at the Sirkazhi Government Hospital. Another patient is a doctor who travelled to Chennai to be part of the frontline workforce in the city. Two patients returned to the district from Chennai while two patients are local residents who tested positive after coming in contact with patients who tested positive earlier.

In Karur, five patients tested positive for the viral infection and have been admitted to the Karur Government Medical College Hospital for treatment. Meanwhile, three patients from Dindigul and one man from Karur were discharged from the hospital after recovering from the infection on Sunday.

Four patients tested positive in Ariyalur. Of them, one returned to the district from Chennai and another from Kumbakonam. The third patient hails from Ariyalur and has no travel history, while another patient was in contact with an individual who tested positive earlier. Three of the patients have been admitted to the Ariyalur District Headquarters Hospital for treatment, while one patient is undergoing treatment in Chennai.

As on Sunday, 513 patients have tested positive in Ariyalur. So far, 463 have recovered and returned home.

Throat swabs have been lifted for 394 people at the Ariyalur Medical College, Ariyalur GH and at various Primary Healthcare Centres and have been sent to the lab for testing.

The sole patient who tested positive in Perambalur is a 61-year-old man from Kunnam. The man has pre-existing conditions of diabetes and has undergone a coronary bypass. He was admitted to a private hospital in Tiruchi on July 6 and the swab returned positive.