Tirumala devotees not to blame for spike in cases: Collector 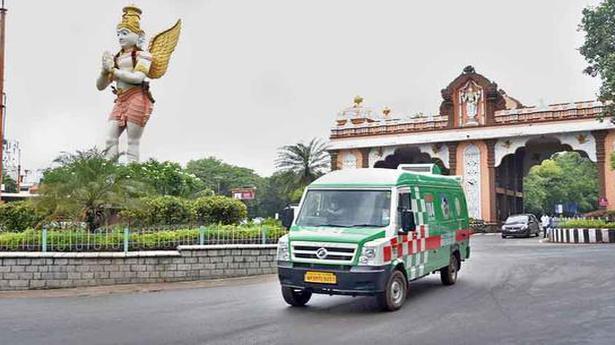 Chittoor Collector Bharat Narayan Gupta on Thursday said that no direct correlation was found between the steady flow of devotees to Tirumala and the spurt in coronavirus cases in the district.

Referring to the allegations that opening the city to pilgrims had led to the spike in cases, the Collector said that the district administration had been testing samples collected randomly from 100 devotees from outside the State visiting the Lord Venkateswara temple.

“We did not find a single positive case in the last 20 days,” he said, adding that the TTD’s staff including a priest, a vigilance employee and a percussion instrumentalist, however, were among those who were tested positive. “Now, efforts are being made to collect samples of 400 employees for testing,” he said.

Speaking to the media on the sidelines of the launching of ‘108’ ambulances on Thursday, Mr. Gupta announced that home isolation could be allowed in certain specific conditions for COVID-19 cases.

In response to a query, he said people having spacious houses with separate bedrooms and toilets would be permitted for home isolation. This will be allowed, only if no children below 10 years of age or elders above sixty years are living in the house,” the Collector said.

‘No dearth of beds’

He asserted that sufficient beds were available in the district. “Around 2,800 institutional beds are available in eight hospitals. This apart, Sri Padmavathi COVID Care Centre in Tirupati has 3,000 beds, where already 400 asymptomatic or cases with mild infection are being accommodated,” Mr. Gupta said.

Similarly, the TTD’s Srinivasam pilgrim accommodation complex would also be roped in, if necessary. He said the idea of inducting more centres would be considered only in case of a spike resulting in 50% of the beds in a given centre getting occupied.

Mr. Gupta attributed the apparent slow down in the test results to the sudden increase in sample size that gave an impression of an ‘apparent increase’ in pendency.

“There were 8,000 cases initially, which we have brought down to 5,000 now, as the samples are being tested in Ruia, SVIMS and a private lab. The sudden increase in the release of results gave an impression of a spike,” he clarified.

The TTD’s BIRRD orthopaedic super specialty hospital would continue to remain a designated COVID hospital, but its services would be utilised only after saturating infrastructural requirement in SVR Ruia (Tirupati) and District Hospital in Chittoor, he said.