TMC government has to be removed lock, stock and barrel: Nadda 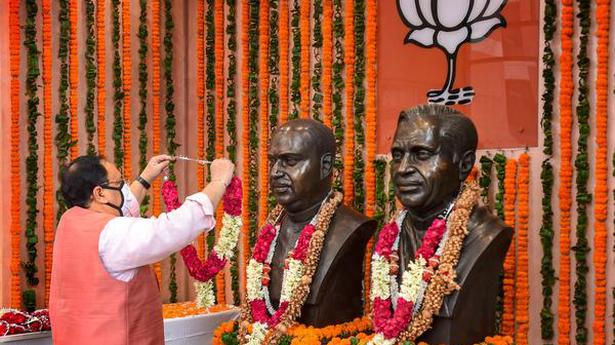 BJP president J.P. Nadda on July 6 launched a broadside against the TMC government in West Bengal and called for its ouster, alleging criminalisation of politics and corruption had scaled new heights under it.

Lauding Jana Sangh founder Syama Prasad Mookerjee’s “fight for a united India” and his “opposition to appeasement politics of Jawaharlal Nehru”, Mr. Nadda said it was an honour to celebrate his birth anniversary at a time when the Modi government has fulfilled his dream of scrapping Article 370 that bestowed on Kashmir a special status.

“On the one hand we have Syama Prasad Mookerjee, who fought for a united India and always kept his ideals and principles above anything, and on the other we have the present TMC government in Bengal for whom clinging to power by any means is everything,” he said.

“Criminalisation of politics has scaled new heights, now we all hear about cut money in Bengal. We need to cut to size these leaders who demand cut money. We need to restore Bengal’s glory and remove this government lock, stock and barrel,” Mr. Nadda told a virtual rally for West Bengal on the birth anniversary of Mookerjee.

Speaking about Mookerjee’s contributions to the nation, Mr. Nadda claimed it was because of the efforts of the Jana Sangh founder that West Bengal and large parts of Punjab were with India.

“It is due to Syama Prasad Mookerjee that Bengal and Punjab are with India. Otherwise they would have gone to Pakistan during Partition…He opposed the appeasement politics of Nehru in post-Independent India…. but the Congress has a bad habit of stifling democratic voices,” he said.

He also attacked the Mamata Banerjee government over its handling of the COVID-19 crisis. “The West Bengal Chief Minister doesn’t believe in cooperative federalism. She is not keen on sharing COVID data with the Centre,” he alleged.