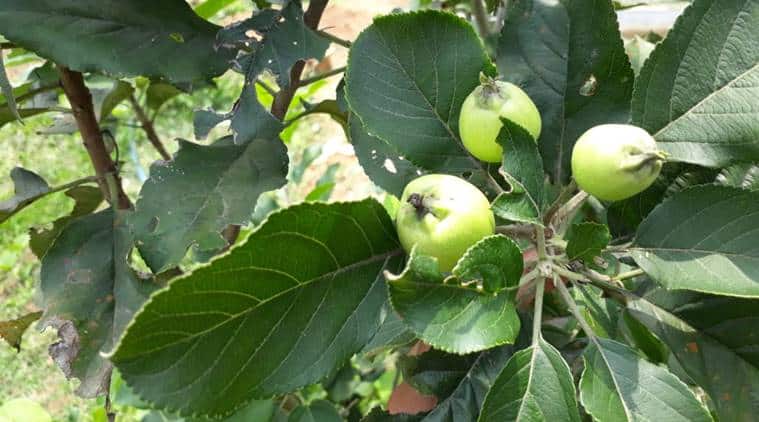 
The HRMN-99 variety is grown in low altitudes and is suited to a relatively warm climate.

Amid the coronavirus pandemic and subsequent lockdown, two men from Amtali village of Charilam in Tripura’s Sipahijala district have grown HRMN-99 variety apples, a special kind which was developed by Himachal Apple Man Hariman Sharma.

The HRMN-99 variety is grown in low altitudes and is suited to a relatively warm climate. The duo’s efforts are perhaps the first successful personal initiative to grow apples in the state.

Speaking to indianexpress.com, Mujesh Debbarma (29) said he and his brother-in-law Samaresh Debbarma (41), two ago, had seen a few videos of growing hybrid varieties of apple in Rajasthan on YouTube. If apples could grow in Rajasthan, why not Tripura, they thought.

“We searched on YouTube and Facebook and then came across the contact of Hariman Sharman, who is also known as the Apple Man of Himachal Pradesh,” Mujesh said.

Hariman Sharma is an acclaimed horticulturist from Bilaspur in Himachal Pradesh. His HRMN-99 variety of apple, also known as ‘Hariman apple’, has been widely adopted by growers. After contacting him, the Debbarmas received a courier of around 50 plants last year. The brothers brought the plants with nearly Rs 1.10 lakh at Rs 350 per unit and planted them on a 0.40 hectare of land in April last year.

The duo also came in touch with some experts from Kolkata and procured more plants of the ‘Anna’ variety, apple plants bred in Israel for growing in tropical climates, and the ‘Golden’ variety.

The brothers brought the plants spending nearly Rs 1.10 lakh at Rs 350 per unit and planted them on a 0.40 hectare of land in April last year. The enterprise had cost around Rs 5 lakh in total. And the first crop appeared recently this year in the form of small green apples.

“We spent over Rs 5 lakh on the apple crop. It has started bearing fruits now. We hope our hard work finally pays off,” Samaresh Debbarma said. Samaresh and Mujesh were involved with rubber plantations before they ventured into the apple business. Of the 250 trees planted by Samaresh and Mujesh, some 40-60 trees have blossomed and around 15 have bore fruits, two weeks after flowering.

Anjan Sen Gupta, a senior scientific officer with the Directorate of Biotechnology, told reporters that the experiment at Charilam was unique and a pioneering approach in Tripura.

“Around 250 apple trees were planted and divided into two parts there. They have applied bio-inputs made with extracts of Neem and garlic on one part as test group and kept the other as control group. The test group which had bio-inputs has shown very good results. It was a unique experiment,” Sen Gupta said.

Of the 250 trees planted by Samaresh and Mujesh, some 40-60 trees have blossomed and around 15 have bore fruits, two weeks after flowering.

Officials from the Directorate of Biotechnology have helped the growers through regular monitoring and telephonic guidance to manage pest infestation and diseases.

The breakthrough has come right after Chief Minister Biplab Deb appealed to farmers, horticulturists and others involved with primary sector activities to double their produce to recover economic losses incurred due to the coronavirus lockdown.

A senior officer of the Horticulture Directorate said officials from the concerned district will be asked to collect details on the apples produced at Charilam.

“This fruit was grown with their own initiative. The usual environmental requirements (for apple) are quite different from here. We don’t know the exact variety they are cultivating and whether it matches that from Himachal Pradesh. Production is not a problem but we have to make sure about the quality of the product and whether it is marketable or not,” the official said.

He added that initiatives to grow grapes were also taken up in some parts of Tripura few years ago but the efforts were fruitless. In recent past, there also have been quite a few experiments of growing exotic fruits like strawberry, dragon fruits, etc, apart from other horticulture crops which are otherwise unsuitable for cultivation in Tripura.