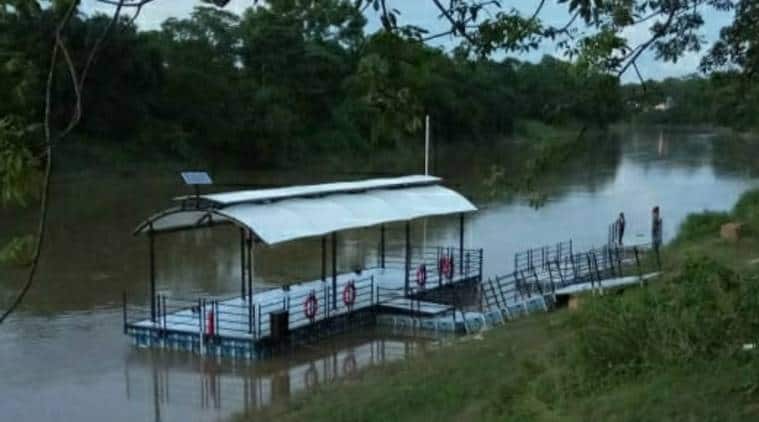 Tripura has readied a floating jetty on River Gomati in Sonamura of Sipahijala district, 60 Km from Agartala, as part of the Indo-Bangla international inland waterways connectivity project, in three weeks.

The jetty, which would connect Sonamura with Daudkandi of Bangladesh, was recently included in the list of Indo-Bangladesh Protocol (IBP) routes signed between High Commissioner of India to Bangladesh Riva Ganguly Das and Bangladesh Shipping Secretary Md. Mezbah Uddin Chowdhury at Dhaka on May 20.

According to plan, small boats and ferries capable of carrying 50 ton goods would start moving through this route to Bangladesh soon and via the neighboring soul, to rest of India and beyond.

In a social media post, Tripura Chief Minister Bipab Kumar Deb said, “We shall have a route from Varanasi to Sonamura opened for us. It is a historical milestone for us. This jetty has been completed within three weeks. There is no temporary jetty anywhere in India, which was completed in three weeks. It has been done for the first time in Tripura, that too in the midst of COVID-19 lockdown. I thank Prime Minister Narendra modi and MoS for Shipping Ministry for the initiative”.

He also said his government is hopeful of exporting queen pineapples, lemon, jackfruit, cashewnuts, oranges and bamboo products to other states and abroad through the inland waterway route.

River Gomati has sufficient water for movement of boas and small ships since it is monsoon now. Though full-fledged operation would require a permanent jetty, a temporary jetty was set up to handle traffic while work for the permanent work would continue alongside. A permanent jetty needs around 3 years to build, the CM said.

A delegation of the Inland Waterways Authority of India (IWAI) visited Tripura earlier in 2018 and surveyed three plots of land near Srimantapur Land Custom Station (LCS) to build a boat jetty and a warehouse. A terminal building would also be building for customs check of imported goods from Bangladesh nearby.

The plan included dredging the riverbed of Gomati to make way for small ships and boats from Sonamura till Ashuganj river port of Bangladesh during the winters. However, testing for the waterway route would be done in this monsoon itself.

Previous articleNow, 237 Maharashtra Police personnel test positive for COVID-19
Next articleIt’s like being on a space station: Aftab Shivdasani on shooting amid coronavirus pandemic