TRS hits out a opposition parties 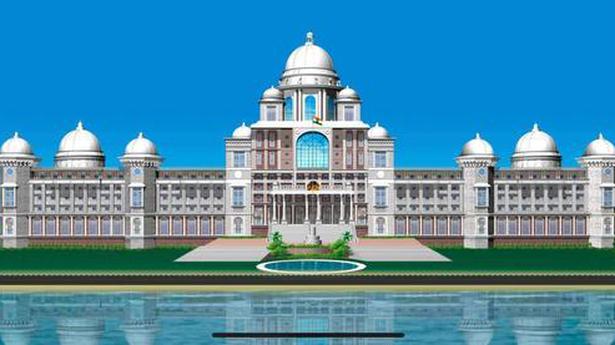 The ruling Telangana Rashtra Samithi (TRS) has strongly rebutted the Congress and other Opposition parties’ criticism of the State government’s move to construct new Secretariat buildings by demolishing the existing ones.

Addressing a press conference here on Tuesday, they strongly objected to the Congress leaders’ plea to the Governor to invoke Section 8 of Andhra Pradesh Reorganisation Act. They sought to know whether there was any sanctity to the provision when Andhra Pradesh and Telangana have separate Governors now. They alleged that Congress was against the progress of Telangana under the leadership of Chief Minister K. Chandrasekhar Rao and the comments of Pradesh Congress Committee president N. Uttam Kumar Reddy would make it clear that he was against formation of the State.

Stating that Telangana had become a role model on several fronts, they explained how Telangana was topping in the growth rate of per capita consumption of energy, how treated water was being supplied to all habitations through Mission Bhagiratha and how the Kaleshwaram water was quenching the thirst of parched lands in many parts of the State. They sought to know from the Congress leaders as to why the States under their rule were not implementing schemes like Rythu Bandhu.

On fighting the coronavirus spread in the State, the TRS leaders said the entire country had complimented the Chief Minister’s gesture towards the migrant labourers during and after the lockdown period.

On the construction of new Secretariat, they said they had promised in the election manifesto itself but the Congress leaders were opposing its construction blindly. They did the same thing when the new camp office for the Chief Minister was constructed. People would teach a fitting lesson to the Opposition parties on their opposition to the new Secretariat and on invoking sections of the Bifurcation Act.

Previous articleIn this Nagaland village, a quarantine centre turns into a Covid-19 ‘creativity’ hub
Next articleFernando Alonso plans surprise return to F1 with Renault at age of 39