It is quite easy to dismiss, but over the years I have discovered that a small number of seemingly unassuming changes in a motorcycle can result in a world of difference in the way it rides. For example, there is almost no difference between the Royal Enfield Interceptor 650 and the Continental GT 650, aside from the ergonomics, but you’d be surprised at how different the two bikes feel when ridden. It’s a similar story with the 2020 TVS Apache RR310, and we flew into Chennai expecting to try out a few small changes, but came away experiencing a noticeably finer riding experience.

With that in mind, it’s unfortunate that TVS didn’t change much in terms of the design because that would have made it clearer to the customer just how much work the company has put in. Visually, the only differences are the ‘Titanium Black’ colour scheme you see here (the trademark red scheme continues), and a new detachable windscreen designed to make it easier for you to clean those hard-to-reach spaces. Beyond this, the two seemingly obvious changes come in the form of the switch to BS-VI and a new 5.0-inch TFT display.

The new display continues with the old LCD’s unusual vertical orientation, but this one is far nicer to look at and is a lot more informative to boot. It’s controlled via fresh switchgear on the left handlebar that looks premium and is intuitive to use. TVS has also thrown in the latest version of its Bluetooth smartphone app, which unlocks a whole host of features, including ride statistics, motorcycle status data, navigation assists, and the ability to make and receive phone calls as well. If you like your toys, you’ll love the design and functionality this new screen brings. 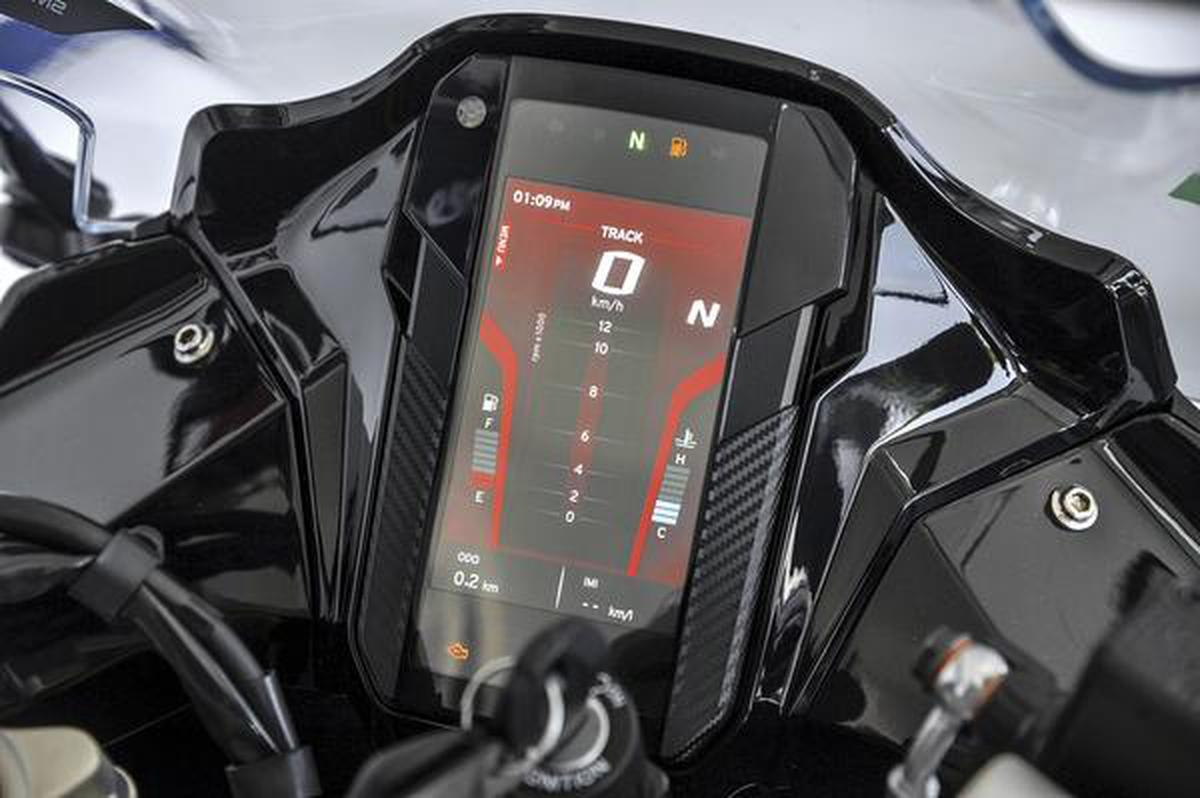 All this hardly affects the riding experience, and that’s where we come to one of the biggest changes for this year — the introduction of a new ride-by-wire throttle system. This not only feels different to the rider’s right hand, but it also brings in a whole new level of adjustability for the bike. The RR now comes with four riding modes — Rain, Urban, Sport and Track. These modes offer different set-ups based on the engine power/response and ABS.

In Rain and Urban modes, you get a gentle throttle response and a significant drop in power to 25.8hp, while torque takes a small drop, down to 25Nm. In Sport and Track modes, though, you get the full 34hp and 27.3Nm of torque. The throttle response in the top two modes is also sharper than it used to be, and there were a few moments where I thought it was a bit too sharp. I’m keen to see what this is like in city traffic because if you want a mellower throttle, you’re going to have to settle for one of the lower power modes which will definitely feel much slower.

The dual-channel ABS set-up is improved as well, and it now has three different levels of intervention, with maximum sensitivity in Rain mode, normal sensitivity in Urban and Sport modes, and a more lenient oversight in Track mode. Each riding mode gets its own theme on the TFT display; you can even customise this by selecting the data widgets you’d like to see. You can’t turn it off though, or disable the rear-wheel ABS. Most customers, however, will spend their time on the street, and TVS has tried to make their lives easier too.

The RR gets the company’s new Glide Through Plus technology. This system manipulates the fuelling to let the bike move forward smoothly at a low speed in each gear, without letting the revs drop too low. It worked quite well while pulling into the pitlane, and the system deactivates the moment you either touch the brakes or pull in the clutch. It’ll be interesting to see how it feels in day-to-day traffic.

As for the engine, this is one of the best BS-VI upgrades I’ve experienced so far. TVS claims the same 2.93sec 0-60kph acceleration time and 160kph top speed, but when you’re in Sport and Track mode, it feels like the engine actually revs a little faster and freer than the one it replaces. Perhaps the best of all is that there has been a significant improvement in refinement. The engine sounds tighter and, for the first time, I rode the RR around the track without a single thought of vibrations popping into my head. There is still a mild buzz in the seat area at lower rpms — which we’re going to have to evaluate on the street — but when you’re riding flat-out on the track, you simply don’t notice anything, and that’s a big deal for the RR310.

Another massive contributor to the RR’s heightened sense of dynamics is the new Michelin Road 5 tyres. These are a huge improvement over the very average Pilot Street tyres on the previous RR. Grip levels are much higher, and they’re also reputed to be excellent in wet-weather conditions. But what I really liked is how they’ve turned the RR into an even sharper cornering machine. The bike leans in noticeably faster now and with less effort; so much so, that many of us found that the foot pegs were scraping much more than before, even with the feeler bolts removed. On these tyres, and with the less-intrusive ABS in Track mode, there’s no doubt that the new RR will set a faster lap time, despite the 4.5kg increase in kerb weight.

The 2020 RR310, then, is a better-equipped motorcycle, and one that’s even more rewarding to ride. TVS has hiked the price by ₹ 12,000, which seems reasonable for what you’re getting. At ₹ 2.4 lakh (ex-showroom), the RR310 is now just ₹ 8,000 less than the considerably more powerful RC390 — and that’s hard to ignore if you’re after outright speed and lap times. However, the RR continues to differentiate itself as it did before — in fact, even better so with this update — and it completely outdoes its rival in terms of electronics. If you want a faired motorcycle that’s easy to live with on the road, yet entertaining on the racetrack, the RR310 is still the sweetest bike at this price.