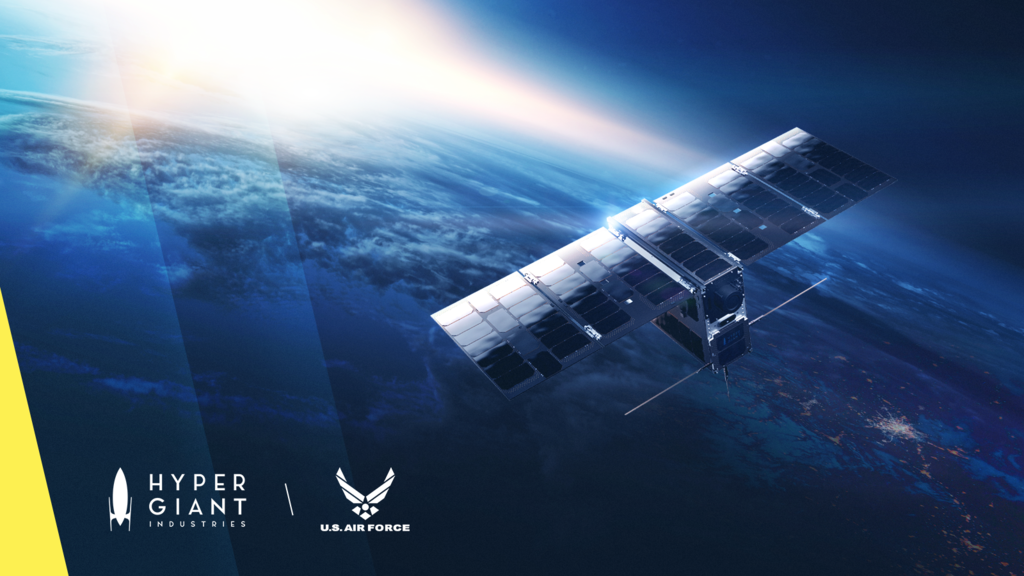 WASHINGTON: The Air Force has launched a landmark effort with AI start-up Hypergiant to build prototypes of a network of small satellites in Low Earth Orbit, whose machine learning/artificial intelligence capabilities can be upgraded for different missions while on-orbit.

If successful, the “Chameleon Constellation” will represent an important breakthrough in military space capabilities. At a minimum, the ability to constantly upgrade software could allow near real-time protection of cybersecurity systems if a satellite detects hacking.

“We’re building this fleet to be as flexible as possible as quickly as possible. Initial mission configurations that we can talk about is an environment to observe, network, wargame, train, and simulate advanced concepts leading to new Standard Operating Procedures and Techniques, Tactics, and Procedures for adversarial threat and/or operational application,” Hypergiant CEO Ben Lamm told Breaking D in an email.

“By deploying smallsats in LEO, operators and users can continually test, demonstrate, and create new procedures for offensive and defensive counter space while inserting new and emerging technology into mission architectures,” he added.

Once machine learning/AI capabilities are built, upgradeable satellites could be loaded with new software allowing them to completely shift missions. For example, a satellite network could rapidly shift from a defensive satellite monitoring role to an offensive role, spoofing predatory adversary satellites. That said, changes in software capabilities can only go so far, as the hardware included on a satellite — such as size and power of antennas, or the size of a camera, do provide clear limits to what capabilities can be added.

“Hardware ultimately limits what one may do, but a flexible software platform does offer certain advantages,” one expert told Breaking D.

Hypergiant and the Air Force characterized the mission of the prototype constellation in a statement today as related to space situational awareness, noting that the effort “will ensure that the Air Force has superior technical advantages in Space with the ability to update satellites’ functionality and mission profiles on the fly based on real-time emergent scenarios and information.”

The service granted a Small Business Innovation Contract (SBIR) to Hypergiant in January, and the company today announced that it is working with the Platform One team and the Space Camp Software Factory to use the Air Force’s Platform One system for secure software development. 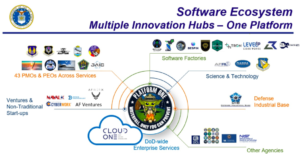 “We need to be able to put assets in space as quickly as possible and then continuously improve them to maintain superiority,” Maj. Rob Slaughter, DoD Platform One director, said in a press release today.

Platform One falls under the Air Force’s Chief Software Officer Nicholas Chaillan. The Platform One team is charged with coordinating all of the service’s various software factories. Platform One is an architecture for securely building software, spawned as part of the Advanced Battle Management System (ABMS) family of systems. ABMS, in turn, is being developed by the Air Force to underpin the military’s Joint All Domain Command and Control (JADC2) concept for managing future all-domain warfare.

“Platform One is an extremely flexible software stack that enables continuous Authorization to Operate (ATO) process for rapid deployment and scalability for any business and weapons system,” Lamm explained. “We’re allocating some of the satellite processors and processes for AI/ML purposes, among other tests.”

According to the press release, the Chameleon Constellation will be able to:

The launch of the first prototype satellite is planned for February 2021, and tit will be operational by early May, he said. The focus of the first mission will be demonstrating the ability for “constant delivery and continuous integration of multiple real-time updates,” Lamm said.

“After this successful first mission, the focus will be putting up additional satellites in the constellation that can leverage [machine learning] models for real-time analysis of in-orbit space derived data,” he added.

Hypergiant Galactic — which sells satellite services, from building bespoke cubesats to arranging ride shares — previously has worked with the Air Force, the Army and DARPA. This includes providing its Slingshot system for deploying multiple Cubesats into orbit.