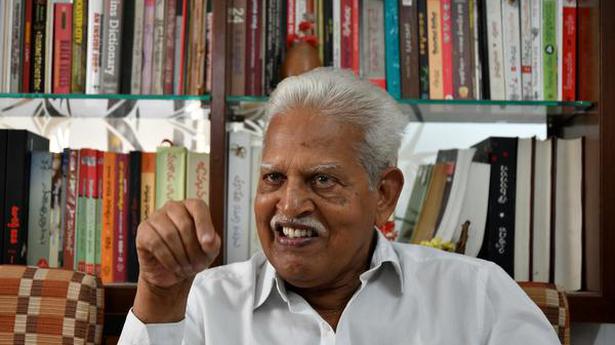 Family members of poet and writer Varavara Rao have raised grave concerns about his failing health and appealed to the Maharashtra State government and the central government to provide him immediate medical treatment at a super speciality hospital.

Addressing an online press meet on Sunday, Mr. Varavara Rao’s nephew and writer N.Venugopal Rao said their concern now was not about his false implication in Bhima-Koregaon case or him being repeatedly denied bail, but about his tottering health.

“We make only one demand: Don’t kill him in jail,” Mr.Venugopal Rao appealed.

Hemalatha, Mr. Varavara Rao’s 72-year old wife, said the poet’s health has been a cause of worry for over one month now. His latest call from Taloja Jail in Mumbai, where he had been held as an undertrial since February, has only increased the fears of family members.

“We have lost our courage with yesterday’s call. He was incoherent, and talking about the death of his long gone parents,” she shared.

Vernon Gonsalves, another undertrial in the same case, who was put on the phone, informed the family that Mr. Rao was not in a position to even walk by himself. He needed assistance in carrying out daily chores such as brushing and going to toilet. Most of the time, he hallucinated.

Recalling that his health status had deteriorated since May 26, and had been admitted to J. J. Hospital, Mumbai two days later, Ms. Hemalatha said his condition improved later as was evident from a letter received on June 6. He sounded weak, but alright the next day too on phone.

However, on June 24, the slip in health status was evident when he began to speak in Hindi with his wife. On July 2, he could not even identify his family members, Ms.Hemalatha said.

Mr. Varavara Rao’s daughter Pavana said her father suffered from electrolyte imbalance as per medical reports, which can be cured easily with early treatment. If delayed, it will result in brain damage.

“He’s eligible for bail, but we are asking only for hospitalisation,” she said.

Responding to a query, Ms. Hemalatha said Union Minister of State for Home G. Kishan Reddy has been briefed about the health status of the poet twice, the latest on Saturday, and help was requested. Letters to Chief Minister K.Chandrashekhar Rao have not yielded any response.