Violin is the star of this quarantine playlist by Shravan Sridhar 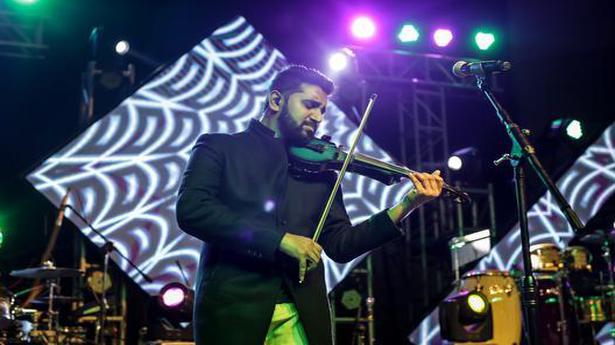 When asked to pick songs in which the violin stole the show, violinist Shravan Sridhar, part of Chennai-based five-piece instrumental band The NonViolinist Project, says, “The songs that I am picking right now, are more or less well known in musician circles at least. The reason I have not picked rare ones is so that people can YouTube these recommendations straight away, and understand how the violin can sing without words.”

That is something that he has been trying to achieve with The NonViolinist Project from its inception, and they are now on the verge of releasing their very first EP. “It has four songs, and you can see how we have been inspired from all the songs I have listed here.”

‘Darlene’ is a perfect blend of extremely virtuosic violin playing and strong melodies, set in Raga Bilahari. It is part of an album produced by the legendary Frank Zappa, and L Shankar is of course, one of the greatest violin players out there.

‘Adbhut’ by Ganesh and Kumaresh

This one was one of the very first ‘fusion’ songs on violin that I had heard, and it inspired me to approach the violin in a fresh manner, and I understood how it can be incorporated into a band setting. This masterpiece weaves in so many ragas within itself and has shaped my song writing immensely.

The collision of worlds between Indian Classical violin, Western Classical violin and Jazz violin opened my mind. L Subramaniam is that quintessential violinist who incorporates a certain world flavour in his playing. It is inspirational.

This song is originally by Led Zeppelin, but this version by Lucia Micarelli, plays a Jean Sibelius composition first as an intro, and then goes into ‘Kashmir’. It showed me how a violin can sit in a rock music setting. I drew inspiration from this as to how musicians can vibe at stage performances, with a heavier format of music. It’s not actually a violin-oriented song like the rest, but this one has an elaborate country fiddle style of violin solo, and I fell in love with this entire genre after listening to this song. This is also a style that I like to experiment with from time to time. It pulled me into a world of country music, which is extremely feel-good and full of positive vibes.

We would love to know how you are keeping busy at home. Tell us what you are listening to, at [email protected]

Previous articleKathakali, symphony and a discussion about RTI on NCPA’s digital series
Next article‘Threads of Change’ – Lessons in sustainable fashion taught on campus