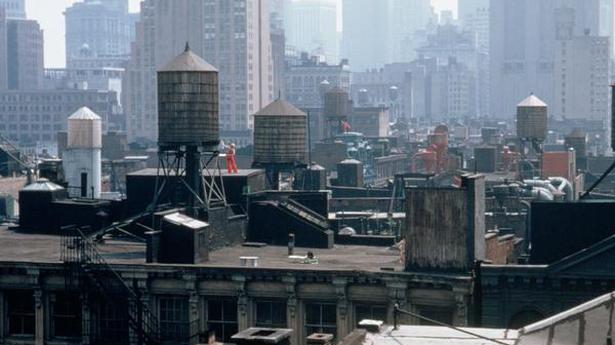 In 1971, in New York’s SoHo neighborhood, a site-specific dance performance — one in which the ‘site’ in question encompassed a dozen rooftops over a roughly ten-block area — was staged by the Trisha Brown Dance Company (TBDC), one year into its inception. Considered as a seminal work that is part of founder Trisha Brown’s “revelatory early oeuvre”, Roof Piece could be described as movement in transmission. On a roofscape strewn with standpipes, chimney-tops and fire escapes — so inviting an obstacle course for latter-day traceurs — contemporary dancers in sheer red held fort on terraces and parapets that stretched out into the distance.

When one dancer would execute a sequence of gestures using their head, torso and limbs, another dancer stationed at an adjoining building would follow suit attempting to replicate the move as faithfully as possible, and so on and so forth. Spectators, standing atop buildings or looking up from the ground, could watch the signals shift and undulate from one body to the next. It was like a game of corporeal Chinese whispers.

In these ‘socially distanced’ times, communication across several degrees of removal has acquired a newfound urgency. In March this year, TBDC mounted a tribute piece, Room/Roof Piece, with dancers — still in red but now safely ensconced in their respective home — transmitting movement from one Zoom window to the next. While Roof Piece’s original idea was inventively retained, audiences at home could now observe all nine dancers in a single frame of the now-familiar Zoom interface (a recording of the performance is on Vimeo). This spoke, quite remarkably, of the great intimacy and fresh perspectives offered up by the technology of our times, and very little appeared to have been lost in translation from dancer to dancer in a generation that thrives on digital similitude in which virtual proximity trumping physical distance like nothing else. For those watching with fresh eyes, the piece doesn’t immediately offer a clue to its raison d’être — the relaying of ‘movement phrases’ and indeed the direction of that transmission is, perhaps for many, happily discovered only during the course of watching it.

The reimagined Room/Roof Piece is one of many ‘new’ performances for the digital age unleashed upon an unsuspecting public during lockdown everywhere. The site of engagement with audiences is usually a streaming platform — for recorded works, both archival and freshly created — but the arena of performance, where actors and collaborators exchange energies, ideas and notes, is now the omniscient video-conferencing application, and it is here where new acts are increasingly being performed live.

It is an environment that has become completely normalized to many, not just to the legions of [email protected] recruits spawned by organisational SOPs, but to freshly minted arts aficionados for whom logging in for a gig comes a shade more easily than dressing-up for the theatre.

The manner in which the new material is received is also not standardised in the mien of the darkened auditorium of yore. Some might watch on a phone with headphones, or on a television, others still might project visuals onto a wall.

The manner in which theatre is experienced during lockdown is much more cinematic than one might like. It raises questions about its very veracity, and its adherence to a form that has stolidly stayed alive for centuries. In theatre, we have experienced ‘blended spaces’ before — in which physical and digital environments are closely integrated — in high-tech immersive theatre or in augmented reality works. This intersection will continue to exist long after things revert to what is being described as ‘The New Normal’. However, the absence of tangible presence in many recently exhibited works — and this writer comes off the back of one such project — makes embracing them as prototypes of a new theatrical experience a tad disorienting. Of course, a suspension of disbelief was already a huge part of the proscenium set-up with its giant curtains and pitch-black fade-outs. If Zoom or its various other competitors can make us buy into the ‘here and now’ potency of a piece, then it will go a long way in establishing the legitimacy of a virtual medium as one in which theatre can find a true, albeit temporary, footing.