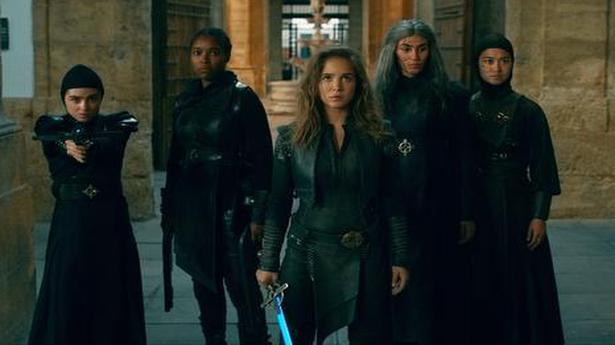 These are exciting times to be a teenager. You could either be fighting a televised battle to death in a post-apocalyptic world, running a sex clinic in your free time from school or solving murders and chasing away persistent ghosts. There is no particular reason why teenagers have been kept out of theological thrillers, which till now have been the exclusive preserve of Harvard symbologists with strange hair.

Simon Barry’s Warrior Nun based on Ben Dunn’s manga comic book, Warrior Nun Areala seeks to correct that oversight. So you have 19-year-old Ava, a quadriplegic who is dead in a morgue with an evil nun saying wicked things, one moment and a ferocious warrior with an ancient artefact embedded in her back the next.

There is a secret society of warrior nuns, Order of the Cruciform Sword that has been battling demons and the forces of darkness for 1000 years since the Crusades. The angel Adriel, saved the founder of OCS, Areala, with his halo. Since then, the halo has passed on to the leader of the order. In the present day, Sister Shannon Masters is the halo bearer. When a mission goes horribly wrong and Shannon is mortally wounded, one of the nuns hides the halo in Ava’s body, which brings a new and improved Ava back from the dead.

The series follows the predictable path of Ava turning away from her destiny and then coming to terms with it. There is evil science lady, Jillian Salvius, who wants to harness the magic metal Divinium (remember unobtainium?) to open up a portal into more silliness. With the Pope ailing, Cardinal Duretti has his own sneaky agenda. While Ava just wants to be a girl standing in front of a boy, there is the impressively hideous tarask out to lay waste to everything in its path.

Despite being about an order of nuns, with cardinals and titling each episode with verses from the Bible, (the first episode is called ‘Psalms 46:5’), Warrior Nun seems to be pussyfooting around religion, Catholicism in particular. The comic book came in for criticism for appropriating religious imagery and for showing Catholicism as an unquestionable force of good.

The show, even while having Ava say, ‘The Catholics get a little twitchy about who get to be resurrected,’ is coy about specifics. Never mind, as Warrior Nun is full-on pulpy fun with superbly choreographed fight sequences.

Apart from being exceedingly good-looking, the cast is as diverse as it is committed. Portuguese actress Alba Baptista makes an assured English language debut as Ava. Toya Turner is Shotgun Mary, the nun that is not a nun. Thekla Reuten is Jillian who is looking for the carpenter and not a priest for that stairway to heaven. Lorena Andrea as Sister Lilith commits the deadly sin of covetousness. Kristina Tonteri-Young is Sister Beatrice who pays for being different. Tristan Ulloa is Father Vincent, Obi Wan to Ava’s Luke — or is he? Joaquim de Almeida is excellent as always as Cardinal Duretti. Emilio Sakraya as JC, (really?) Ava’s love interest, flaunts his bulging biceps and sensitivity. Peter de Jersey plays Kristian Schaefer, who left the church for science when he couldn’t see the point of prayer.

Shot in some of the loveliest locations in Spain, including Marbella, Ronda, Antequera, Málaga, and Sevilla, Warrior Nun offers the chance to luxuriate in the blindingly blue skies, the glorious cathedrals with dreaming spires, rugged mountains and meditative ruins—a balm for our eyes in this pandemic locked down world.

JC and his friends have a good scam going of shacking up in rich people’s vacation homes when the owners are away. Imagine staying in one of those well-stocked palaces through the lockdown! When Ava asks how come postcards are still a thing or when the Airport Express comes calling, it kicks off a fierce ache of nostalgia for a simpler, jolly time. Sigh.

The cliff hanger ending of Season 1 ensures we would eagerly be waiting for Season 2 and more smart ones from Ava, along the lines of whether it was the Rock or Liam Neeson who saved Areala.