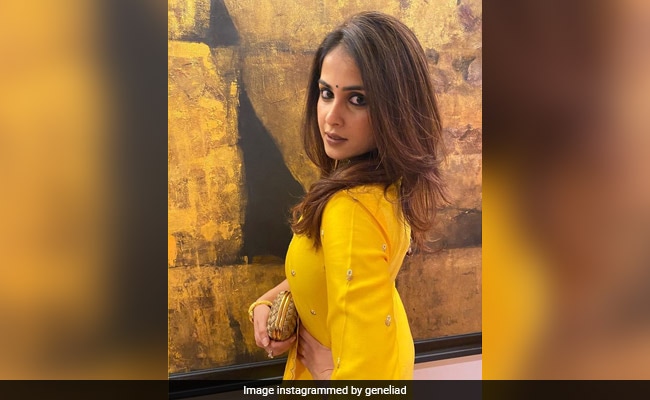 Vidyut Jammwal, whose film Khuda Hafiz is all slated to release on OTT platform Disney+Hotstar along with six other big Bollywood films, was not a part of the live session that took place on Monday evening. The actor, in his tweet, stated that he and Kunal Kemmu, whose film Lootcase will be releasing on the same platform, weren’t invited for the panel while Bollywood stars Akshay Kumar, Alia Bhatt, Ajay Devgn and Abhisehk Bachchan were present to unveil their respective films’ posters and talk about them. Also present during the meet was Varun Dhawan, who despite not having any upcoming releases on the platform, was chosen as the mediator. Vidyut Jammwal’s tweet did not go unnoticed by a section of the Internet which supported him, among them was his Force co-star Genelia D’Souza, who said that it was “fair to expect an invitation.”

Reacting to Vidyut Jammwal’s tweet, Genelia D’Souza wrote: “More power to you.” The actress added, “Every film is made with a lot of love, a lot of sweat and a lot people giving it their all. It’s only fair to want a little respect. It’s only fair to expect an invitation and it’s only fair to have at least been intimated. But then, sometimes even life is not fair. Keep walking my friend.”

More power to you….. @VidyutJammwal

Vidyut Jammwal expressed his disappointment over not being invited to the virtual press meet in a strongly-worded tweet and he wrote: “A big announcement for sure! 7 films scheduled for release but only 5 are deemed worthy of representation. 2 films, receive no invitation or intimation. It’s a long road ahead. The cycle continues.”

A BIG announcement for sure!!
7 films scheduled for release but only 5 are deemed worthy of representation. 2 films, receive no invitation or intimation. It’s a long road ahead. THE CYCLE CONTINUES https://t.co/rWfHBy2d77

Kunal Kemmu’s film Lootcase was introduced by Varun Dhawan during the chat as the film’s lead actor wasn’t a part of session. Varun said, “The film has an amazing star cast and I have been Kunal Kemmu’s fan since Raja Hindustani. He has often inspired me with his films.”

Kunal Kemmu, without taking names in his tweet, shared a cryptic post that read, “Izzat aur pyaar maanga nahi kamaya jaata hai. Koi na de toh usse hum chhote nahi hote. Bas maidaan khelne ke liye barabar de do chhalaang hum bhi oonchi laga sakte hai (Respect and love are not asked for, they are earned. If someone doesn’t give it to us it doesn’t make us any smaller. Just give us a field to play and we too can take a high leap).”

Previous articleDia Mirza can’t get enough of prints; here’s proof
Next articleWHO urges countries to expand access to rapid molecular tests for the detection of TB and drug-resistant TB